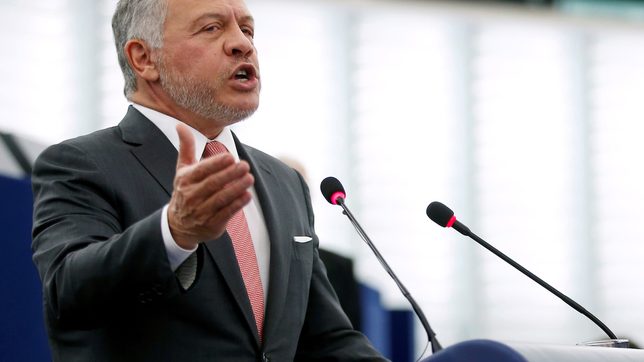 Jordan’s neighbors and allies reacted with statements of support after the Jordanian military said on Saturday, April 3, that King Abdullah’s half-brother and former Crown Prince Hamza bin Hussein had been told to halt actions used to target the country’s “security and stability.”

In a statement published by the state news agency, it said the action was part of a broader security investigation in which a former minister, a member of the royal family and some other unidentified individuals were detained.

Here are responses from different countries and groups:

“We are closely following the reports and in touch with Jordanian officials. King Abdullah is a key partner of the United States, and he has our full support,” US State Department spokesman Ned Price said in an email.

“The kingdom affirms its full support, with all its capabilities, to all decisions and measures taken by King Abdullah and His Highness Prince Al Hussein bin Abdullah II, the Crown Prince, to maintain security and stability,” the Saudi royal court said in a statement.

The Ministry of Presidential Affairs stressed the UAE’s full support for all decisions and measures taken by King Abdullah and his crown prince to maintain Jordan’s security and stability and “to defuse any attempt to impact them”.

Senior Emirati official Anwar Gargash said on Twitter Jordan’s “wise policy to build bridges in a turbulent region was not an easy choice but was, and remains, the necessary direction.”

Egypt voiced support for King Abdullah and his efforts “to maintain the security and stability of the kingdom against any attempts to undermine it,” its presidency spokesman wrote on Facebook.

Oman completely stands by Jordan under the leadership of King Abdullah and firmly supports anything that preserves Jordan’s security, sovereignty and stability, the Foreign Ministry said in a statement.

“Iran is opposed to any internal instability and foreign interference and believes that all internal affairs of the countries should be pursued within the framework of the law,” Iran’s Foreign Ministry spokesman Saeed Khatibzadeh said, according to state media.

“Internal tension and instability in the West Asian region would be in favour of the Zionist regime (Israel)…There are always traces of this regime in any sedition in Islamic countries.”

Kuwait’s foreign ministry expressed its support to all measures taken by King Abdullah and his crown prince to maintain the security and stability of Jordan.

“The Iraqi government affirms that it stands with the Hashemite Kingdom of Jordan, under the leadership of His Majesty King Abdullah II, in any steps taken to preserve the security and stability of the country and take care of the interests of the brotherly people of Jordan, in a way that boosts their presence, by relying on measures that aim to extend the respect of the state,” the foreign ministry said in a statement.

Qatar expressed its full solidarity with Jordan and full support to the decisions and measures issued by King Abdullah to preserve security and stability, and boost the process of progress and prosperity, state news agency QNA said.

It said strategic bilateral relations “will remain an honest and strong guard against any attempts to undermine the security and stability in the two countries and the region.”

Yemen’s internationally recognized government “affirms its absolute support and totally stands with all decisions and measures taken by His Majesty King Abdullah aimed at maintaining security and ending any attempts to destabilize the sisterly Kingdom of Jordan,” state news agency Saba said.

“Palestinian President Mahmoud Abbas said that we stand by the sisterly Hashemite Kingdom of Jordan, the king, the government, and the people,” the official Palestinian news agency WAFA said in a statement.

“We support the decisions taken by King Abdullah II to preserve Jordan’s security and ensure its stability and unity.

“We support the steps taken by King Abdullah to maintain Jordanian national security, stressing that Jordan’s security and stability is a supreme Palestinian interest.”

“He also stressed his confidence in the leadership’s wisdom and its keenness to secure the country’s stability in parallel with the respect for the constitution and the law.

Turkey’s Foreign Ministry voiced support for King Abdullah and the government of Jordan, and said that it was watching developments with concern.

“In this framework, we express our strong support for King Abdullah II and the Jordanian government, as well as for the tranquility, welfare and well-being of the friendly and brotherly people of Jordan,” it said. – Rappler.com