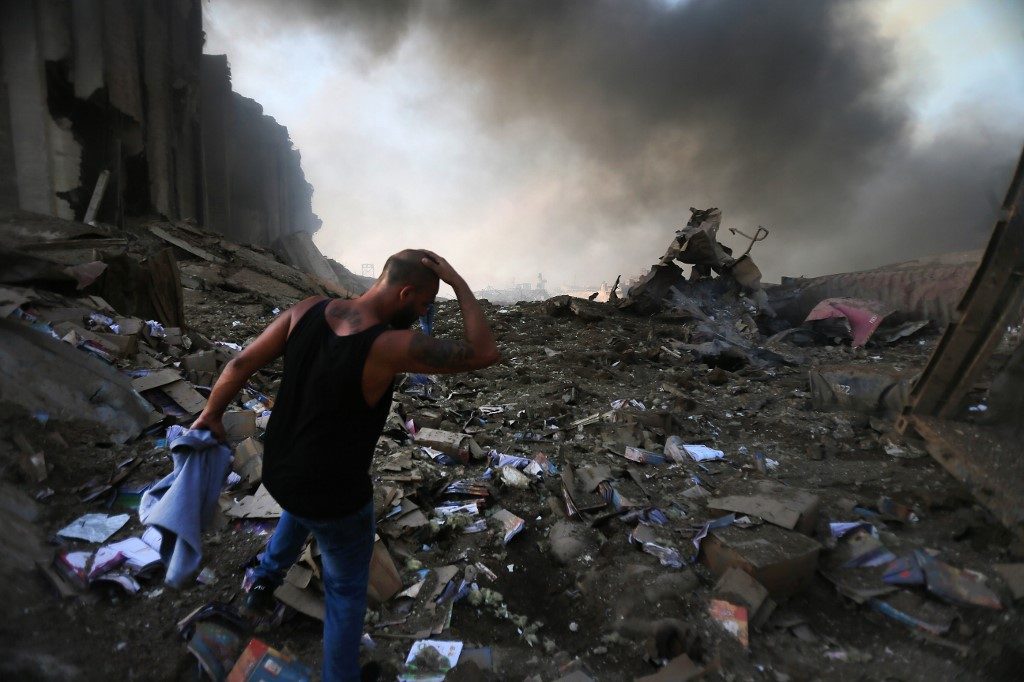 RUINS. The scene of an explosion at the port in the Lebanese capital Beirut on August 4, 2020. Photo by STR/AFP

Facebook Twitter Copy URL
Copied
Even as they count their dead, many Lebanese are consumed with anger over the blast they see as the most shocking expression yet of their leadership's incompetence

Lebanon’s embattled leadership, under fire after a massive explosion laid waste to large parts of central Beirut, faced public fury Thursday, August 6, and stern calls to reform from the visiting French president and the IMF.

Grief has turned to anger in a traumatized nation where at least 149 people died and over 5,000 were injured in Tuesday’s colossal explosion of a huge pile of ammonium nitrate that had languished for years in a port warehouse.

To many Lebanese, it was tragic proof of the rot at the core of their governing system which has failed to halt the deepest economic crisis since the 1975-1990 civil war that has plunged millions into poverty.

French President Emmanuel Macron, on a snap visit to shell-shocked Beirut, pledged to lead international emergency relief efforts and organise an aid conference in the coming days, promising that “Lebanon is not alone.”

But he also warned that Lebanon – already in desperate need of a multi-billion-dollar bailout and hit by political turmoil since October – would “continue to sink” unless it implements urgent reforms.

Speaking of Lebanon’s political leaders, Macron said “their responsibility is huge – that of a revamped pact with the Lebanese people in the coming weeks, that of deep change.”

Beirut explosion: The disaster was exceptional but events leading up to it were not – researchers The International Monetary Fund, whose talks with Lebanon started in May but have since stalled, warned that it was “essential to overcome the impasse in the discussions on critical reforms.”

The IMF urged Lebanon – which is seeking more than $20 billion in external funding and now faces billions more in disaster costs – “to put in place a meaningful program to turn around the economy” following Tuesday’s disaster.

‘I understand your anger’

Macron’s visit to the small Mediterranean country, France’s Middle East protege and former colonial-era protectorate, was the first by a foreign head of state since the unprecedented tragedy.

As he inspected a devastated pharmacy, crowds outside vented their fury at the country’s “terrorist” leadership, shouting “revolution” and “the people want an end to the regime!”

Later Macron was thronged by survivors who pleaded with him to help get rid of their reviled ruling elite.

Under the nervous gaze of his suited bodyguards, Macron gave one woman a prolonged embrace triggering wild cheers from the crowd.

“I understand your anger. I am not here to endorse…the regime,” Macron assured the crowd. “It is my duty to help you as a people, to bring you medicine and food.”

Another woman implored Macron to keep French financial aid out of the reach of Lebanese officials, accused by many of their people of rampant graft and greed.

“I guarantee you that this aid will not fall into corrupt hands,” the president pledged.

‘System has to go’

The disaster death toll rose from 137 to 149 on Thursday evening, the health ministry said, and was expected to further rise as rescue workers kept digging through the rubble.

Offering a glimmer of hope amid the carnage, a French rescuer said there was a “good chance of finding…people alive,” telling Macron 7 or 8 missing people could be stuck in a room buried under the rubble.

Even as they counted their dead, many Lebanese were consumed with anger over the blast they see as the most shocking expression yet of their leadership’s incompetence.

‘State, what state?’ Lebanese together in solidarity and rage “We can’t bear more than this. This is it. The whole system has got to go,” said 30-year-old Mohammad Suyur.

A flood of angry posts on social media suggested the disaster could reignite a cross-sectarian protest movement that erupted in October but faded amid the grinding economic hardship and the coronavirus pandemic.

Prime Minister Hassan Diab and President Michel Aoun have promised to put the culprits responsible for the disaster behind bars.

And late Thursday a military prosecutor announced 16 port staff had been detained over the blast.

But trust in institutions is low and few on Beirut’s streets held out hope for an impartial inquiry.

Macron told reporters that “an international, open, and transparent probe is needed to prevent things from remaining hidden and doubt from creeping in.”

Amid the gloom and fury, the aftermath of the terrible explosion has also yielded countless uplifting examples of spontaneous solidarity.

Lebanon’s diaspora, believed to be nearly 3 times the tiny country’s population of 5 million, has rushed to launch fundraisers and wire money to loved ones.

In Beirut, much of the cleanup has been handled by volunteers.

“We’re sending people into the damaged homes of the elderly and handicapped to help them find a home for tonight,” said Husam Abu Nasr, a 30-year-old volunteer.

“We don’t have a state to take these steps, so we took matters into our own hands.” – Rappler.com