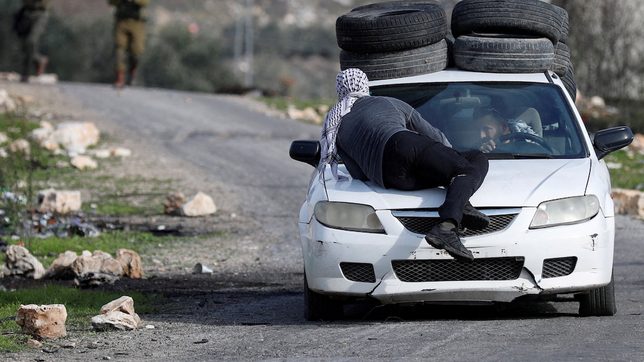 A Palestinian demonstrator takes cover sitting on a car loaded with tires as Palestinians clash with Israeli troops during a rally marking the 57th anniversary of Fatah movement foundation and against settlements, near Nablus in the Israeli-occupied West Bank December 31, 2021. REUTERS/Mohamad Torokman TPX IMAGES OF THE DAY

Facebook Twitter Copy URL
Copied
Hamas claims him as member, saying he had mounted a 'heroic stabbing operation' against 'the enemy and its settlers'

RAMALLAH, West Bank – Israeli troops shot dead a Palestinian assailant running towards them with a knife at a bus station in the occupied West Bank on Friday, December 31, the army said, and the Hamas group claimed him as a member.

Citing an initial investigation, an army statement said that the man had arrived at a junction near the Jewish settlement of Ariel in a car, got out and “armed with a knife, ran toward the bus station where civilians and IDF soldiers were standing.”

The Palestinian health ministry identified the dead man as a resident of Qarawet Bani Hassan, a nearby village.

Hamas claimed him as a member, saying in a statement that he had mounted a “heroic stabbing operation” against “the enemy and its settlers.”

The Israeli army said it was pursuing whoever else was in the vehicle, which had fled the scene.

The West Bank has seen sporadic violence since US-sponsored talks on founding a Palestinian state alongside Israel stalled in 2014. – Rappler.com