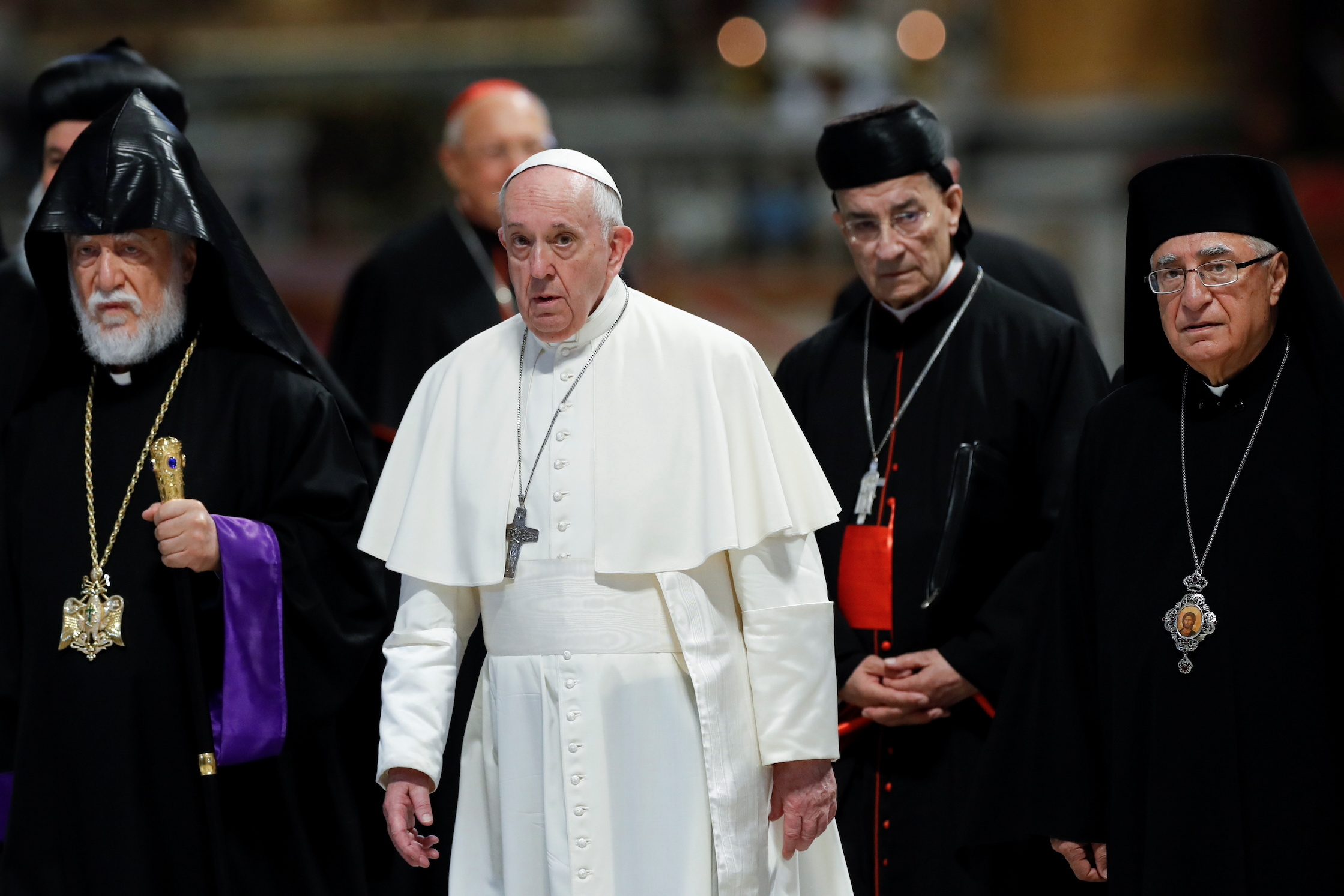 Pope Francis holds a meeting with Aram I, Catholicos of Cilicia of the Armenians, Cardinal Bechara Boutros, Maronite Patriarch of Antioch and All the East, and other Lebanon's Christian leaders to discuss the country's crisis, at the Vatican, July 1, 2021. REUTERS/Remo Casilli

Pope Francis and Lebanon’s Christian leaders began a summit on Thursday, July 1, to discuss how religion can help the country overcome its worst crisis since its civil war ended in 1990.

Francis and the patriarchs of Lebanon’s various Christian groups walked from the Santa Marta residence where he lives into St Peter’s Basilica.

The Pope, dressed in his white cassock, and the leaders, dressed in black, lit candles and prayed before the tomb of St Peter under the basilica’s main altar.

The Maronite, Greek Orthodox, Armenian, Syrian Orthodox and Protestant Churches were among those represented.

From the Basilica, the Pope and the patriarchs moved to the Clementine Hall in the Vatican’s Apostolic Palace for a day of primate meetings. A public ceremony, including a closing addressed by the Pope was due to start on Friday afternoon.

Francis has said he wants to visit Lebanon, but wants fractious politicians to agree on a new government.

The Vatican’s foreign minister, Archbishop Paul Gallagher, said last week the visit could take place late this year or early next year. He suggested the Pope could go even without a government in place.

“The Christian community is weakening, there is a risk that the internal balance in Lebanon itself will be destroyed, endangering the presence of Christians in the Middle East,” Gallagher said.

Prime minister-designate Saad al-Hariri has been at loggerheads for months with President Michel Aoun over cabinet positions.

Lebanon’s three main Christian groups are Maronite Catholics, Eastern Orthodox and Melchite Catholics. There are a number of other smaller Protestant, Orthodox, and Catholic groups.

Lebanon is still reeling from a huge chemical explosion at the Beirut port last year that killed 200 people and caused billions of dollars worth of damage, further weakening an economy already facing meltdown.

The crisis has pushed much of the population into poverty and poses the biggest threat to stability since the 1975-1990 civil war.

Hariri, a three-time prime minister, resigned in 2019 after nationwide protests against a political elite blamed by demonstrators for pushing the country into crisis. – Rappler.com