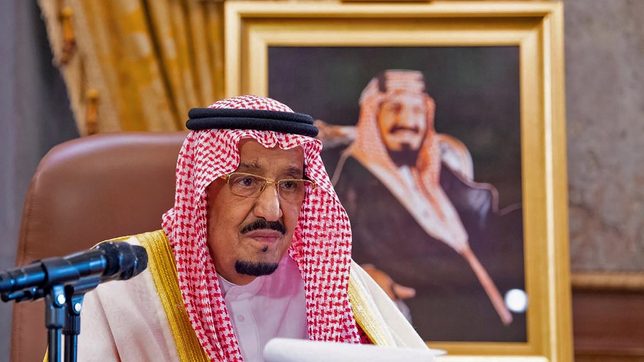 A handout picture provided by the Saudi Royal Palace on March 19, 2020 in the capital Riyadh shows Saudi King Salman bin Abdulaziz speaking during a televised speech, addressing the nation about the COVID-19 coronavirus disease pandemic. - Saudi Arabia's King Salman warned on March 19 of a "more difficult" fight ahead against the new coronavirus, as the kingdom faces the double blow of virus-led shutdowns and crashing oil prices. Saudi Arabia has reported 274 COVID-19 cases but no deaths so far. The Arab world's biggest economy has shut down cinemas, malls and restaurants, halted flights and suspended the year-round umrah pilgrimage as it steps up efforts to contain the deadly virus. (Photo by Bandar AL-JALOUD / Saudi Royal Palace / AFP) / RESTRICTED TO EDITORIAL USE - MANDATORY CREDIT "AFP PHOTO / SAUDI ROYAL PALACE / BANDAR AL-JALOUD"

Facebook Twitter Copy URL
Copied
It is rare for Saudi Arabia to report on the health of the aging monarch, who has ruled the top oil exporter and the Arab world's biggest economy since 2015

It is rare for Saudi Arabia to report on the health of the aging monarch, who has ruled the top oil exporter and the Arab world’s biggest economy since 2015.

The king is the second reigning monarch in the Gulf to be hospitalized after Kuwait’s 91-year-old emir Sheikh Sabah al-Ahmad Al-Sabah, amid the twin regional crises of the coronavirus pandemic and a plunge in crude prices.

The king “underwent a laparoscopic surgery to remove the gall bladder today… at King Faisal specialist hospital in Riyadh,” the royal court said in a statement carried by the official Saudi Press Agency.

The king will remain in hospital for some time after the “successful” surgery, the statement added.

The monarch was admitted to hospital on Monday, July 20, “for some medical tests” due to inflammation of the gall bladder, according to the royal court.

The king’s hospitalization prompted Iraqi Prime Minister Mustafa al-Kadhemi to postpone his scheduled visit to Saudi Arabia, which was due to start on Monday.

A video released by state media on Tuesday showed the king chairing a virtual cabinet meeting from hospital.

The soundless video was apparently aimed at dispelling rumors about the king’s health.

In 2017, Saudi Arabia dismissed reports and mounting speculation that the king was planning to abdicate in favor of his young son, Crown Prince Mohammed bin Salman, who is widely seen as the de facto ruler.

Under the king’s rule, Saudi Arabia has launched ambitious economic reforms for a post-oil era and given more rights to women, but also adopted a more assertive foreign policy and entered a war in neighboring Yemen. – Rappler.com