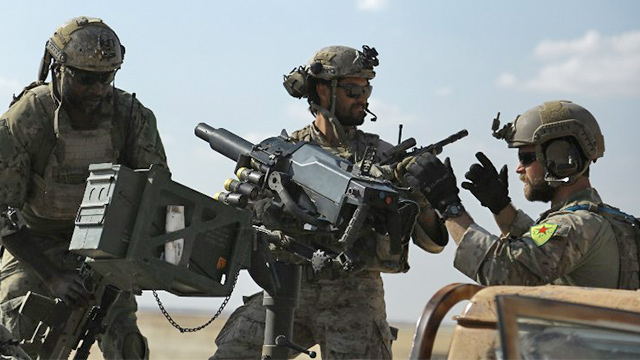 SYRIAN TROOPS. This file photo taken on May 25, 2016 shows men in uniform identified by Syrian Democratic forces as US special operations forces as they ride in the back of a pickup truck in the village of Fatisah in the northern Syrian province of Raqa. US special operations forces photographed in Syria wearing the insignia of Kurdish troops considered terrorists by Turkey have been ordered to remove the patches, a military spokesman said May 27, 2016. Ankara accused the United States, a NATO ally, of u0022unacceptableu0022 behavior for such an overt display of support for the Kurdish People's Protection Units (YPG).

BEIRUT, Lebanon – (UPDATED) Syrian troops pushed into the Islamic State in Iraq and Syria group's (also known as ISIS, IS, ISIL, or Da'esch) bastion province Raqa on Saturday, June 4, 2016, for the first time since 2014, in an advance towards the country's largest dam, a monitor said.

The Tabqa dam on the Euphrates River, 40 kilometers (25 miles) upstream from Raqa city, is also the target of a separate offensive launched by US-backed Kurdish-led forces advancing from the north late last month.

The lightning advance from the southwest brought government troops to within less than 40 kilometers (25 miles) of Tabqa, which is also the site of an airbase, Abdel Rahman said.

"It seems there has been an undeclared coordination between Washington and Moscow," he added, referring to the pincer movement by the two governments' respective Syria allies.

At least 26 jihadists and nine government troops and militia were killed in the advance, according to the Britain-based Observatory, which relies on reports from medics and activists on the ground.

When IS overran the area in 2014, it summarily executed 160 captured regime troops.

The jihadists are facing counter-attacks on multiple fronts.

Arab and Kurdish fighters backed by Washington have launched an assault on the strategic Manbij pocket further up the Euphrates on the Turkish border, regarded as a key entry point for foreign jihadists.

Hundreds of kilometers (miles) downstream in neighboring Iraq, elite Iraq troops have launched an assault on the emblematic ISOS bastion of Fallujah. – Rappler.com