Taking the call in Gaza before Israel takes out the building 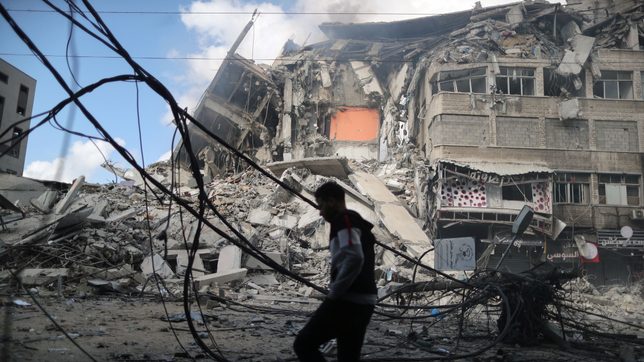 DESTROYED. A Palestinian man walks past the remains of a tower building which was destroyed in Israeli air strikes, amid a flare-up of Israeli-Palestinian violence, on the first day of Eid al-Fitr holiday, in Gaza City on May 13, 2021.

The building watchman spoke on his mobile intently, pacing up and down a quiet street in Gaza. In video footage caught by an onlooker, Jamal Nasman showed no panic. Yet what he was hearing was deadly serious.

He later told Reuters an Israeli officer had been giving him advance warning that the 13-story block he looked after would be the target of an air strike. Israel said Hamas militants used the building.

Amid the fiercest escalation in fighting between Israelis and Palestinians since 2014, this is what Nasman said in the call on Tuesday, May 11, offering an insight into how – at least sometimes – these neighbors and antagonists fight their wars:

Another man leans in, eager to hear the caller. “Ok, got it. The drone will hit it once and then two more times.” Pause. “Then you’ll strike the block.” The 67-year-old father of eight stops again. “Yes, right, no problem, just a moment…everyone has exited the building, even those from the buildings around are standing on the road – there is no one.”

The building that had residential apartments and Hamas offices, which Israel said included intelligence and military operations, was evacuated. First, small missiles struck the block in Gaza City’s Rimal district, then boom, the building crumpled, footage showed. Hours after it was destroyed, Israel confirmed it had given a prior warning for civilians to leave.

This is not what always happens when Israel strikes what it deems a military target.

It says it makes every effort to preserve civilian life and accuses Hamas – the group that rules Gaza and which it deems a terrorist organization – of using civilian areas to mount operations, such as planning attacks or firing rockets at Israeli towns and cities.

ç. They say the vast majority of sites are hit without prior warning.

Yet the mobile exchange that preceded the strike on the Rimal block has become a more common feature of conflict since the 2014 escalation in Gaza: Israel’s army makes a call, tells residents to evacuate, tap-tap-tap go the small missiles as a final warning – and then a big one brings the building down.

“We select warheads with the necessary lethality to hit those who need to be hit, and to reduce the impact on others,” said an Israeli official, who spoke to Reuters on condition of anonymity, saying careful intelligence preceded the strikes.

“Roof-knock munitions have also been used as part of our warnings on residents to get out in advance,” he said. Operations by Hamas turn the buildings into legitimate targets, he said.

Footage by residents using smartphones, or recorded by Israel’s military or the media, including Reuters, have shown some blasts that are contained to a single apartment or bring down a tower block while buildings next door stay standing.

In other cases, television footage has showed residential blocks and ordinary homes in Gaza shattered or destroyed by blasts, whether from direct hits or collateral damage, along with the dead and wounded being carried away.

“Even assuming, as the Israeli government claims, that a 13-story residential tower in Gaza housed ‘an office that is used by the political leadership’ of Hamas, how is it proportionate for an Israeli air strike to destroy the entire building?” Kenneth Roth, executive director of Human Rights Watch, wrote on Twitter.

Giora Eiland, a former Israeli army general and national security adviser, described Gaza high-rises targeted as crucial assets of Hamas, saying hitting them was “certainly legal and even compulsory for a country that wants to conclude a war.”

Israeli commentator on Arab affairs, Shimrit Meir, said some of the apartment blocks where Hamas had operations were also homes for a wealthier Palestinian elite. When they were destroyed, she said it added to pressure on the group.

“It spells an almost impossible duress for Hamas to deal with,” she said, citing the Rimal district block as an example.

Inside Israel, smaller rockets fired from Gaza have struck a range of civilian sites, although many are brought down first by Israel’s Iron Dome anti-missile system.

On Wednesday morning, May 12, Nawal Khader said Israel struck two apartments on the ground floor of a block, in the center of Gaza City, where she lives on the 11th floor.

“No one received any warning in advance. We could have left if we did,” the 53-year-old said, adding that her mother-in-law was hospitalized after inhaling smoke from the explosion.

“Once you are home and safe, a minute later you run for your life, this is how Israel wants Gaza to be,” she said.

It was not immediately possible to verify her account. – Rappler.com