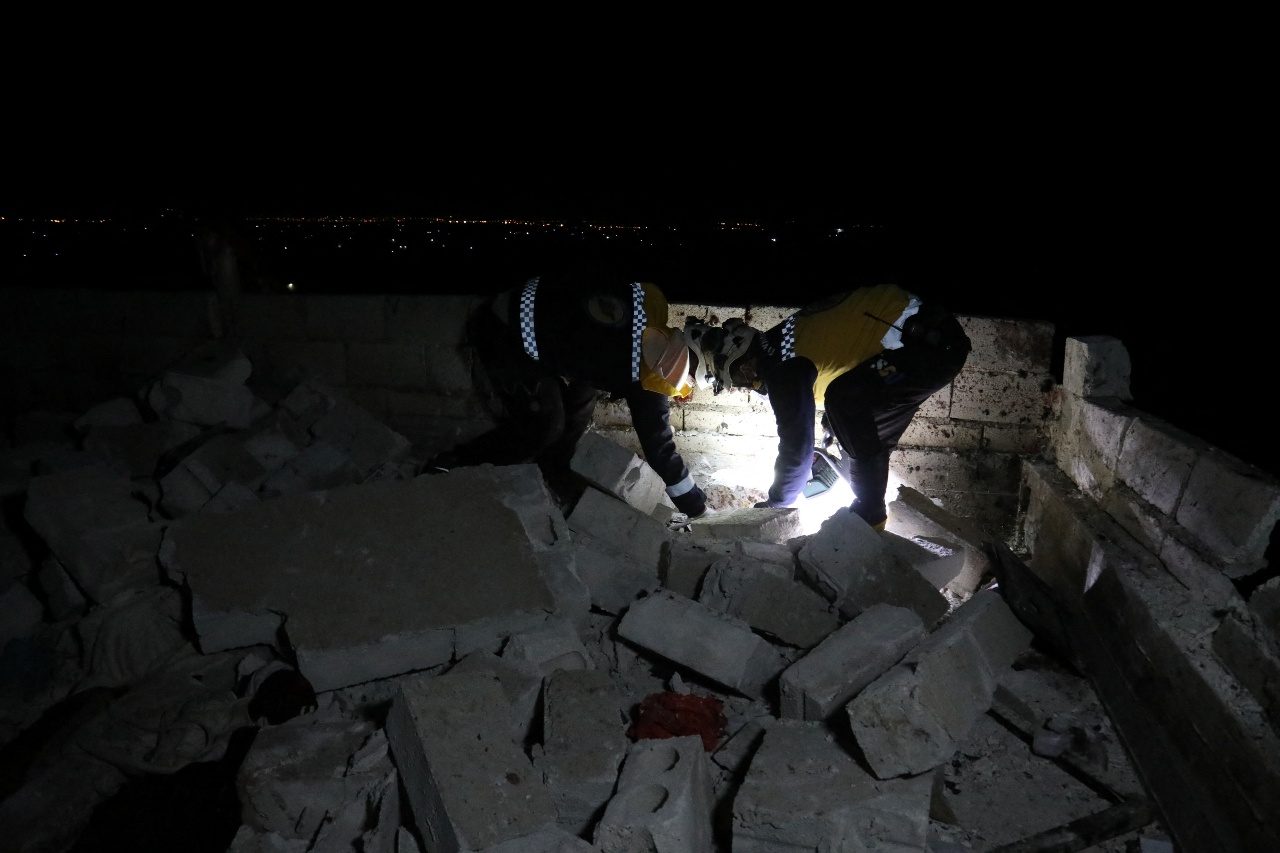 COUNTERTERRORISM MISSION. Emergency personnel search through debris in the aftermath of a counterterrorism mission conducted by the US Special Operations Forces in Atmeh, Syria, on February 3, 2022, in this picture obtained from social media.

Courtesy of Mohamed Al-Daher via Reuters

Facebook Twitter Copy URL
Copied
Syrian rescue workers say at least 13 people including six children and four women were killed by clashes and explosions that erupted after the raid began, targeting a house in the Atmeh area near the Turkish border

AMMAN, Jordan – US special forces successfully carried out a counterterrorism mission in northwest Syria on Thursday, February 3, the Pentagon said, a raid which Syrian sources said was believed to have targeted an al Qaeda-linked jihadist.

Syrian rescue workers said at least 13 people including six children and four women were killed by clashes and explosions that erupted after the raid began, targeting a house in the Atmeh area near the Turkish border.

“US Special Operations forces under the control of US Central Command conducted a counterterrorism mission this evening in northwest Syria. The mission was successful,” Pentagon Press Secretary John Kirby said in a statement.

“There were no US casualties. More information will be provided as it becomes available.”

He did not identify the target.

A number of jihadist groups with links to al Qaeda operate in northwestern Syria, the last major bastion of rebels fighting President Bashar al-Assad in the decade-long Syrian war. Leaders of the Islamic State group have also hidden out in the area.

Several rebel sources said they were almost certain the target was a leading jihadist, but could not be sure who.

Residents said helicopters landed and heavy gunfire and explosions were heard during the raid that began around midnight. US forces used loud speakers to warn women and children to leave the area, they said.

A video taken by a resident and seen by Reuters showed the bodies of two apparently lifeless children and a man in the rubble of a building at the location.

More footage showed rescue workers loading what appeared to be a small body wrapped in a white plastic sheet into an ambulance. Other body bags were in the back of the vehicle.

Using head torches in the dark, the workers looked for remains through chunks of concrete, children’s soft toys and women’s clothing in a bombed-out building. A kitchen was blackened and burnt, windows hung from their frames and plastic utensils were half melted.

Reuters could not independently verify the videos.

A Syrian man who witnessed the raid said he went out of his house after midnight and saw aircraft in the sky.

“Ten minutes later we heard screams. ‘Surrender, the house is surrounded,'” he said. “We heard fire. There was shelling from airplanes and machine guns.”

One witness who lives nearby said he saw several bodies at the scene. “There was blood everywhere,” he told Reuters. He added that one US helicopters appeared to suffer a mechanical failure and was blown up by the US forces.

A rebel official who declined to be named said the jihadist who was the apparent target of the raid was with his family at the time.

Witnesses said the raid ended with aircraft, believed to be helicopters, leaving the site but unidentified reconnaissance planes were still hovering in the area.

Jihadists in northwestern Syria include Huras al-Din (Guardians of Religion), an al Qaeda-affiliated faction whose leaders include foreign fighters.

US forces have used drones to target the group and other jihadists in the area for years, but Thursday’s operation appeared to be the largest of its kind by US forces in the northwest since Islamic State leader Abu Bakr al-Baghdadi died in a US special operations raid in 2019, said Charles Lister, senior fellow with the Washington-based Middle East Institute.

Islamic State fighters have been reemerging as a deadly threat, aided by the lack of central control in many areas, according to a dozen security officials, local leaders and residents in northern Iraq.

The United States has offered rewards for information leading to the identification of senior Huras al-Din leaders.

The most powerful group in northwestern Syria is Hayat Tahrir al-Sham, the former Nusra Front, which was part of al Qaeda until 2016.

The rebel official said security from the Hayat Tahrir al-Sham group hurried to the location after the raid.

The Atmeh area is crammed with tens of thousands of Syrians who have been uprooted in the war and live in makeshift camps or overcrowded housing. – Rappler.com