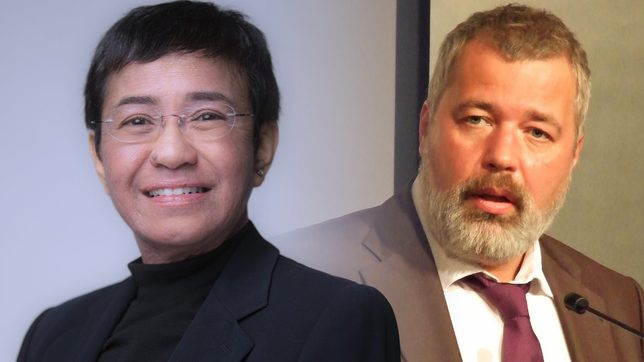 Past winners of the Nobel Peace Prize welcomed Rappler chief executive officer Maria Ressa and Russian journalist Dmitry Muratov into their ranks on Friday, October 8, after the two journalists won this year’s prize recognizing the role of the press.

Former president of Columbia, Juan Manuel Santos, tweeted his congratulations on Friday night (Manila time), calling the award a “timely recognition of press freedom as a pillar of democracy and peace.”

Santos was awarded the Nobel Peace Prize in 2016, “for his resolute efforts to bring the country’s more than 50-year-long civil war to an end.”

“We must keep fighting for our right to speak freely, challenge leaders, and improve social systems,” Yousafzai said.

Yousafzai won the prize in 2014 with Indian activist Kailash Satyarthi “for their struggle against the suppression of children and young people and for the right of all children to education.”

According to the Nobel Prize’s site, Santos worked as a journalist and editor before being elected as president in 2010. Since 2009, Yousafzai blogged about her experiences living under the Taliban’s rule.

On Friday, Chairwoman Berit Reiss-Andersen of the Norwegian Nobel Committee said Ressa and Murtov were “representatives of all journalists who stand up for this ideal in a world in which democracy and freedom of the press face increasingly adverse conditions.”

Ressa has been the target of attacks for her media organization’s critical coverage of President Rodrigo Duterte’s administration and a key leader in the global fight against disinformation.

Muratov is one of the founders and the editor-in-chief of the independent newspaper Novaja Gazeta, which the committee called “the most independent newspaper in Russia,” publishing critical articles on “corruption, police violence, unlawful arrests, electoral fraud and ‘troll factories,’ to the use of Russian military forces both within and outside Russia.”

The prize is the first Nobel Peace Prize for journalists since  1935, when German journalist Carl von Ossietzky won for revealing his country’s secret post-war rearmament program. – with reports from Reuters/Rappler.com