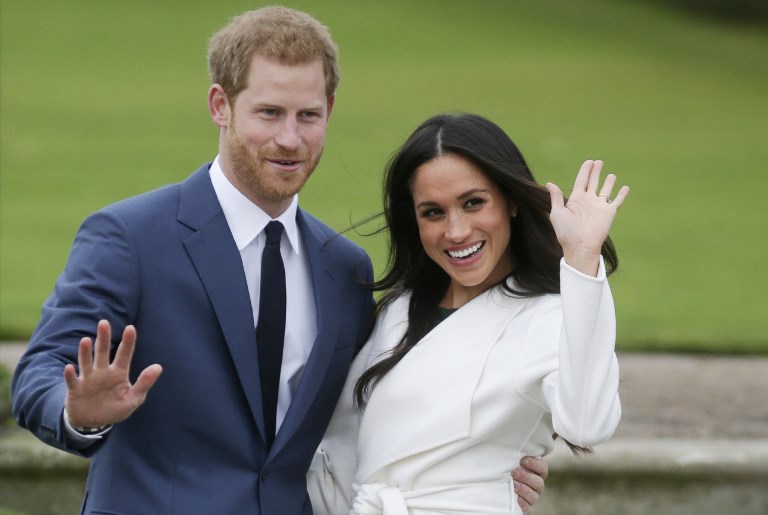 ENGAGED. Britain's Prince Harry and his fiancée US actress Meghan Markle pose for a photograph in the Sunken Garden at Kensington Palace in west London on November 27, 2017, following the announcement of their engagement. Photo Daniel Leal-Olivas/AFP

LONDON, United Kingdom – Britain's Prince Harry said Monday, November 27 he was "thrilled" to be marrying his American girlfriend Meghan Markle early next year, confirming months of speculation about the one-time playboy royal and the glamorous actress.

The prince revealed he fell for Markle "the very first time we met" as the pair posed smiling and laughing for photographers in the gardens of his home at Kensington Palace.

The "Suits" actress, wearing a white coat and nude high heels, said she was "so very happy" as she held Harry's hand and showed off her diamond engagement ring.

Queen Elizabeth II, Harry's grandmother, led the chorus of approval for the couple, who the palace said got engaged in London in secret earlier this month.

Monday's announcement ended fevered speculation about the 33-year-old prince, once the bad boy of the House of Windsor who has become one of the most popular royals.

He has been dating Markle, 36, since last summer but the pair made their first public appearance together only in September.

"His Royal Highness The Prince of Wales is delighted to announce the engagement of Prince Harry to Ms Meghan Markle. The wedding will take place in spring 2018," Clarence House, the office of Harry's father Prince Charles, said in a statement.

After their engagement, Harry informed the queen, close members of the royal family and also sought the blessing of Markle's parents.

He designed the ring himself – it contains one diamond from Botswana, a country he visited numerous times, and two from his late mother princess Diana's personal collection.

"The Queen and The Duke of Edinburgh are delighted for the couple and wish them every happiness," said a message on the monarch's official Twitter page.

The couple will live at Nottingham Cottage in the grounds of Kensington Palace, where his brother William and his pregnant wife Kate live with their two children.

Harry's bride-to-be, who has already been married, is best known for her role as a lawyer in the hit television series "Suits" but is now expected to become a duchess.

She has reportedly already begun moving her two dogs Guy and Bogart to London, ahead of what will be Britain's first royal wedding since William and Kate in 2011.

Her parents Thomas Markle and Doria Ragland said in a statement they were "incredibly happy."

"Our daughter has always been a kind and loving person," they said. "To see her union with Harry, who shares the same qualities, is a source of great joy for us as parents."

It is set to be a busy spring for the royal family, with the wedding and the arrival of a new child for William and Kate providing light relief from the dour political headlines as Britain negotiates Brexit.

Wellwishers gathered Monday outside Buckingham Palace, including John Egan, 72, who said: "It is good for the country.

"The royal family is too tight, too controlled, the older ones exist in the last century, they really need to modernize."

Harry, the second son of Prince Charles and Diana, spent 10 years in the British army, serving two tours of duty in Afghanistan.

In his younger days, he regularly hit the headlines for his partying and his outspoken criticism of the media, whom he blames for the death of his mother.

However, he has turned himself into one of the royal family's most popular figures after defining a role as a caring but robust champion of veterans.

William and Kate said they were "very excited for Harry and Meghan", adding "it has been wonderful getting to know Meghan".

The couple met in July 2016 in London, introduced by mutual friends, and the relationship was later confirmed by Harry's office following speculation in the press.

Exasperated by the media frenzy, the palace also released an extraordinary statement attacking the "sexism" and "racism" directed at Markle, who is of mixed race.

Prime Minister Theresa May offered her "warmest congratulations," writing on her official Twitter page that it was a "time of huge celebration".

Paddy Power is offering odds to 7/1 for Markle to be already pregnant when she walks down the aisle, while Elton John, who was close to princess Diana, is 6/1 to perform at the service. – Rappler.com