Council may rule Afghanistan; Taliban to reach out to soldiers, pilots 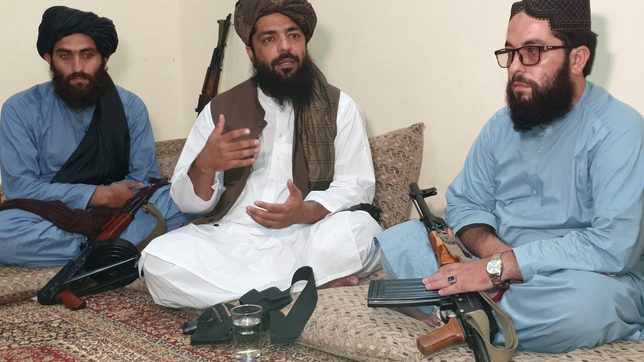 Waheedullah Hashimi (center), a senior Taliban commander, gestures as he speaks with Reuters during an interview at an undisclosed location near Afghanistan-Pakistan border August 17, 2021.

Facebook Twitter Copy URL
Copied
Taliban especially needs pilots because they had none, while they seized helicopters and other aircraft in various Afghan airfields during their lightning conquest of the country after foreign troops withdrew

Afghanistan may be governed by a ruling council now that the Taliban has taken over, while the Islamist militant movement’s supreme leader, Haibatullah Akhundzada, would likely remain in overall charge, a senior member of the group told Reuters.

The Taliban would also reach out to former pilots and soldiers from the Afghan armed forces to join its ranks, Waheedullah Hashimi, who has access to the group’s decision-making, added in an interview.

How successful that recruitment is remains to be seen.

Thousands of soldiers have been killed by Taliban insurgents over the last 20 years, and recently the group targeted US-trained Afghan pilots because of their pivotal role.

The power structure that Hashimi outlined would bear similarities to how Afghanistan was run the last time the Taliban were in power from 1996 to 2001. Then, supreme leader Mullah Omar remained in the shadows and left the day-to-day running of the country to a council.

Akhundzada would likely play a role above the head of the council, who would be akin to the country’s president, Hashimi added.

“Maybe his (Akhundzada’s) deputy will play the role of ‘president’,” Hashimi said, speaking in English.

The Taliban’s supreme leader has three deputies: Mawlavi Yaqoob, son of Mullah Omar; Sirajuddin Haqqani, leader of the powerful militant Haqqani network; and Abdul Ghani Baradar, who heads the Taliban’s political office in Doha and is one of the founding members of the group.

Many issues regarding how the Taliban would run Afghanistan have yet to be finalized, Hashimi explained, but Afghanistan would not be a democracy.

“There will be no democratic system at all because it does not have any base in our country,” he said. “We will not discuss what type of political system should we apply in Afghanistan because it is clear. It is sharia law and that is it.”

Hashimi said he would be joining a meeting of the Taliban leadership that would discuss issues of governance later this week.

On recruiting soldiers and pilots who fought for the ousted Afghan government, Hashimi said the Taliban planned to set up a new national force that would include its own members as well as government soldiers willing to join.

“Most of them have got training in Turkey and Germany and England. So we will talk to them to get back to their positions,” he said.

“Of course we will have some changes, to have some reforms in the army, but still we need them and will call them to join us.”

Hashimi said the Taliban especially needed pilots because they had none, while they had seized helicopters and other aircraft in various Afghan airfields during their lightning conquest of the country after foreign troops withdrew.

“We have contact with many pilots,” he said. “And we have asked them to come and join, join their brothers, their government. We called many of them and are in search of (others’) numbers to call them and invite them to their jobs.”

He said the Taliban expected neighboring countries to return aircraft that had landed in their territory – an apparent reference to the 22 military planes, 24 helicopters and hundreds of Afghan soldiers who fled to Uzbekistan over the weekend. – Rappler.com