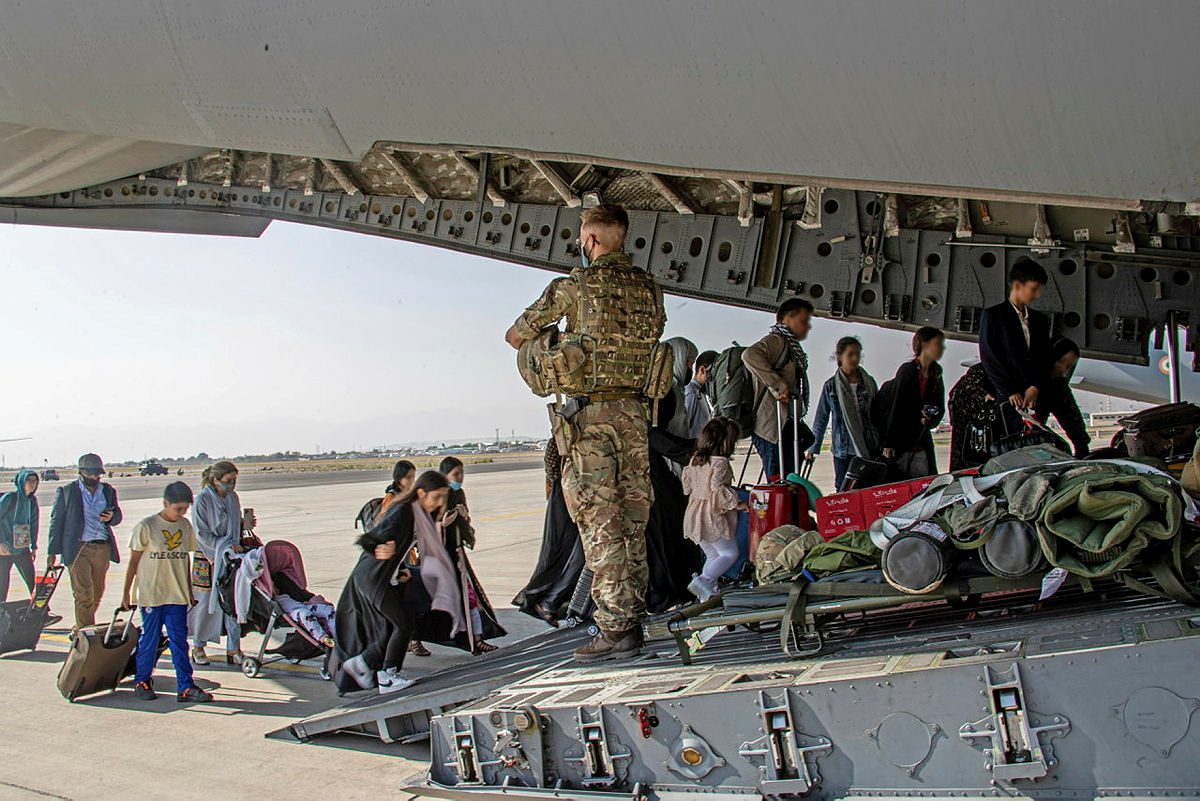 EVACUATIONS. In this file photo, British citizens and dual nationals residing in Afghanistan board a military plane for evacuation from Kabul airport, Afghanistan August 16, 2021, in this handout picture obtained by Reuters on August 17, 2021.

More than 2,200 diplomats and civilians have been evacuated from Afghanistan on military flights, a Western security official said on Wednesday, August 18, as the Taliban made first efforts to set up a government after their lightning sweep into the capital.

The Taliban have said they want peace, will not take revenge against old enemies and will respect the rights of women within the framework of Islamic law. But thousands of Afghans, many of whom helped US-led foreign forces over two decades, are desperate to leave.

“We are continuing at a very fast momentum, logistics show no glitches as of now,” the Western security official told Reuters. He said it was unclear when civilian flights would resume.

The official said those getting out included diplomatic staff, foreign security staff and Afghans who worked for embassies, but he not give a breakdown of how many Afghans were among the more than 2,200 people to leave.

The Taliban, fighting since their 2001 ouster to expel foreign forces, seized Kabul on Sunday, August 15, as US-led Western forces withdrew under a deal that included a Taliban promise not to attack them as they leave.

US forces running the airport had to stop flights on Monday, August 16, after thousands of frightened Afghans swamped the airfield looking for a flight out. Flights resumed on Tuesday, August 17, as the situation came under control.

Seventeen people were wounded on Wednesday in a stampede at a gate to the airport, a NATO security official said. Civilians seeking to leave had been told not to gather unless they had a passport and visa to travel, he said, adding that he had not heard any reports of violence by Taliban fighters at the airport.

Britain said it had managed to bring out about 1,000 people a day while Germany flew 130 people out. France said it had moved out 25 of its nationals and 184 Afghans and Australia said 26 people have arrived on its first flight back from Kabul.

“Everyone wants out,” said one Afghan man who arrived in Frankfurt on Wednesday with his wife and son on a flight via Tashkent. “We saved ourselves but we couldn’t rescue our families.”

As the Taliban consolidated power, one of their leaders and co-founders, Mullah Abdul Ghani Baradar, returned to Afghanistan for the first time in more than 10 years. A Taliban official said leaders would show themselves to the world, unlike in the past when they lived in secret.

“Slowly, gradually, the world will see all our leaders,” the senior Taliban official told Reuters. “There will be no shadow of secrecy.”

A Taliban commander and senior leader of the Haqqani Network militant group, Anas Haqqani, had met former Afghan President Hamid Karzai for talks, a Taliban official said, amid initial efforts by the Taliban to set up a government.

The Taliban held their first news briefing since their return to Kabul on Tuesday, suggesting they would impose their laws more softly than during their harsh 1996-2001 rule.

Women would be allowed to work and study and “will be very active in society but within the framework of Islam”, he said.

During their rule, also guided by sharia religious law, women were prevented from working, girls were not allowed to go to school and women had to wear all-enveloping burqas to go out and then only when accompanied by a male relative.

British Prime Minister Boris Johnson, echoing leaders of other Western countries, said the Taliban would be judged on their actions.

“We will judge this regime based on the choices it makes, and by its actions rather than by its words, on its attitude to terrorism, to crime and narcotics, as well as humanitarian access, and the rights of girls to receive an education,” Johnson told parliament.

Britain has said it will welcome up to 5,000 Afghans during the first year of a new resettlement program that will prioritize women, girls and religious and other minorities.

Many Afghans are also skeptical of the Taliban promises. Some said they could only wait and see.

“My family lived under the Taliban and maybe they really want to change or have changed but only time will tell and it’s going to become clear very soon,” said Ferishta Karimi, who runs a tailoring shop for women.

Mujahid said the Taliban would not seek retribution against former soldiers and government officials, and were granting an amnesty for ex-soldiers as well as contractors and translators who worked for international forces.

US President Joe Biden and Johnson said they had agreed to hold a virtual meeting of Group of Seven leaders next week to discuss a common approach to Afghanistan.

The decision by Biden, a Democrat, to stick to the withdrawal deal struck last year by his Republican predecessor, Donald Trump, has stirred widespread criticism at home and among US allies.

Biden said he had to decide between asking US forces to fight endlessly or follow through on Trump’s withdrawal deal. He blamed the Taliban takeover on Afghan leaders who fled and the army’s reluctance to fight. – Rappler.com