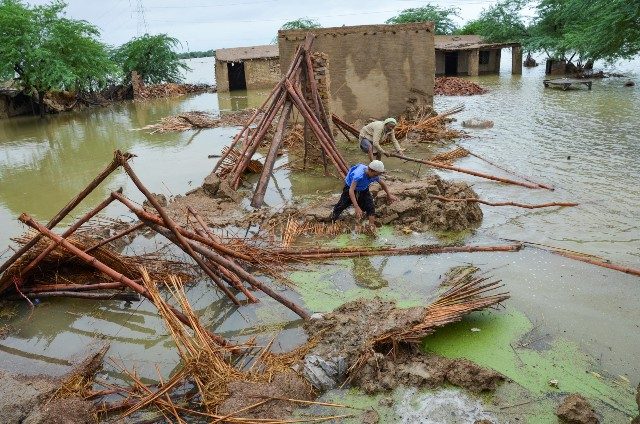 Facebook Twitter Copy URL
Copied
Pakistan has been battered by back-to-back climate catastrophes in recent years, and is struggling to find the funding it needs to recover from unprecedented flooding

KARACHI, Pakistan – Pakistan’s climate change minister, Sherry Rehman, is heading to Egypt for the UN COP27 climate summit with one goal: finally getting the world to commit to helping countries like hers deal with the growing “loss and damage” caused by global warming.

As richer nations focus on debating how to slow rising temperatures while still producing the bulk of greenhouse gas emissions, poorer places are already suffering the consequences of a hotter climate and more extreme weather, from worsening floods and droughts to deadly heat and rising sea levels.

Pakistan has been battered by back-to-back climate catastrophes in recent years – floods, heatwaves and forest fires – and is struggling to find the funding it needs to recover from unprecedented flooding that started in June, inundating a third of the country.

“We have repeatedly made the moral case for loss and damage compensations at different platforms,” Rehman told the Thomson Reuters Foundation. “We will deliver the same message at COP27.”

“Loss and damage” refers to the harm and destruction that happens when people and places are not prepared for climate-driven impacts, and have not or cannot adjust the way they live to protect themselves from longer-term shifts.

Nine years ago, UN climate negotiators agreed to set up a formal mechanism to tackle loss and damage – but, apart from a donor-backed effort to boost insurance against weather disasters in developing countries, little has happened since.

That was mainly because rich governments did not want to be held financially liable for the impacts of their historically high emissions, although some are now softening their opposition to find funding to address loss and damage, as vulnerable people are being hit hard in all parts of the world.

Rehman, alongside other officials and climate experts in Pakistan, are calling for the establishment of a dedicated “Loss and Damage Finance Facility.”

They see COP27 as an opportunity not only for governments to set up such a fund but also to commit an amount to launch it.

Pakistan is a “climate victim” that has grabbed the world’s attention and empathy – and is also currently chairing the G77 and China, an alliance of developing countries that is a key player at the COP summits, noted Malik Amin Aslam, an environmentalist and former Pakistan climate change minister.

That puts it in a unique position to “not only highlight the catastrophic reality of climate change, but also directly influence the COP process to secure some concrete results,” he said.

“Pakistan should not leave the table without securing that (loss and damage fund),” Aslam added. “Anything short of that will be a failure.”

Efforts to find more money to help poorer countries grow sustainably, adapt to climate impacts and recover from climate disasters they did little to create are expected to be at the forefront of the negotiations in Egypt.

In 2009, wealthy countries promised that from 2020 onwards they would mobilize $100 billion per year to help vulnerable states adapt to climate change and green their energy systems – a pledge that is still unmet.

In a video message posted in the run-up to COP27, UN Secretary-General António Guterres called the climate conference a critical “litmus test” for rebuilding trust between developed and developing countries, and said he hoped it would be able to secure meaningful outcomes around loss and damage.

Guterres singled out the devastation caused by the flooding in Pakistan as an example of how “the world is failing to invest in protecting the lives and livelihoods of those on the frontline.”

A recent assessment led by Pakistan’s government has put the cost of recovery from the floods at more than $16 billion, based on impacts to transport and communication infrastructure, agriculture, the food supply and housing, among others.

That sum is impossible for Pakistan – with its economy already wracked by spiraling inflation – to cover on its own, said its climate change minister, Rehman.

While a national recovery plan is yet to be announced, Prime Minister Shehbaz Sharif has said the government is first focusing on getting farmers back on their feet.

This week, Sharif announced that banks would provide small-scale farmers with interest-free and subsidized loans totaling 1.8 trillion Pakistani rupees ($8.12 million), while interest on money they had borrowed before the flooding would be waived.

For Ahmad Rafay Alam, a Pakistani environmental lawyer and activist, the floods have “crystallized the voice of loss and damage” – by demonstrating both the devastating impacts of climate change and the lack of support from the West.

He pointed to the fire that tore through Notre-Dame cathedral in Paris in 2019, recalling how 900 million euros ($877 million) of donations flooded in over just two days.

In contrast, in response to the Pakistan floods, the United Nations launched an appeal to raise $160 million, which was later increased to $816 million to provide healthcare, food, shelter, and clean drinking water to 9.5 million people.

UN Resident and Humanitarian Coordinator in Pakistan, Julien Harneis, told journalists in October that only $90 million had been received so far.

“Notre-Dame may be iconic, but it was still a brick-and-mortar building,” Alam said. “Here we are talking about some 30 million homeless Pakistanis.”

In Egypt, Rehman is hoping to press upon officials the need for urgent action, instead of “arguing over which emissions are good and which are not.”

The climate summit’s consensus-based decision-making and the lack of an enforcement mechanism to ensure nations live up to the commitments they make can often be barriers to concrete, positive change, she said.

But, that imperfect system is “all we have” to help developing countries survive and adapt to an increasingly hot and dangerous climate, she added.

She emphasized that the world is “hurtling towards” warming of 3 degrees Celsius – “and the developed nations will need to move beyond carbon-rich lifestyles and conflict and security interests to avoid a climate apocalypse.”

“What goes on in Pakistan will not stay in Pakistan,” warned Rehman. “If one ecosystem suffers, soon others will feel the impacts as well.” – Rappler.com