India has most COVID-19 cases in 2 months, worst-hit Kerala in focus VACCINATION. People wait to receive a dose of COVAXIN COVID-19 vaccine manufactured by Bharat Biotech, during a vaccination drive organized by SEEDS, an NGO which normally specialize in providing relief after floods and other natural disasters, at an under-construction flyover in New Delhi, India, on August 31, 2021.

Facebook Twitter Copy URL
Copied
The federal government has warned that like in Kerala, the rest of India could also see a rise in infections around the festival season starting September and ending in early November

India reported the biggest single-day rise in COVID-19 cases in two months on Thursday, September 2, as the government worries about the virus spreading from the most-affected Kerala state, schools reopening, and the start of the festival season.

Densely populated Kerala, on India’s southern tip, accounted for nearly 70% of the 47,092 new infections and a third of deaths, a week after it celebrated its biggest festival during which family and social gatherings were common.

“With cases rising in Kerala, adequate steps should be taken to contain the inter-state spread of COVID-19,” Health Minister Mansukh Mandaviya said in a statement after speaking with his state counterparts in Tamil Nadu and Karnataka, which border Kerala.

He asked them to increase vaccination in the districts close to Kerala. India has so far administered 662 million doses, with at least one dose in 54% of its 944 million adults and the required two doses in 16%.

Vaccinations have soared in recent days as supplies have improved. And as more than two-thirds of Indians already have COVID-fighting antibodies, mainly through natural infection, experts think another national surge in cases will be less deadly than the last one in April and May when tens of thousands of people died and hospitals ran out of beds and oxygen.

‘Last year was nothing compared to now’: Learning from India’s second wave 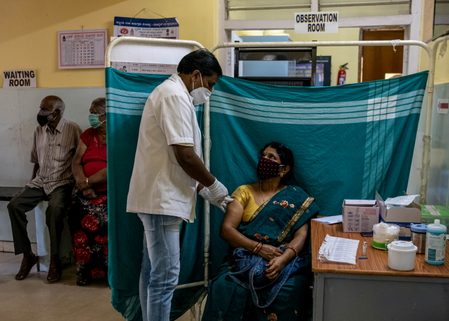 Also offering hope is a recent non-peer-reviewed study done in Kerala that showed that one dose of the AstraZeneca shot, the mainstay of India’s immunization drive, generates 30 times more antibodies in previously infected people than fully inoculated ones who never contracted the virus.

“A decently managed vaccination program, along with the hybrid immunity we’re seeing now, makes a massive third wave unlikely,” said clinical immunologist and rheumatologist Padmanabha Shenoy, who led the study and was referring to the immunity from natural infection and one vaccine dose.

The federal government, nevertheless, has warned that like in Kerala, the rest of India could also see a rise in infections around the festival season starting this month and ending in early November.

Some parents are also worried about the reopening of physical classes – voluntary and mainly for middle school and above – in the capital Delhi and states like Gujarat.

India has so far reported about 32.9 million infections, the most in the world after the United States. Deaths went up by 509 on Thursday to a total of 439,529, which experts say is a massive undercount. – Rappler.com