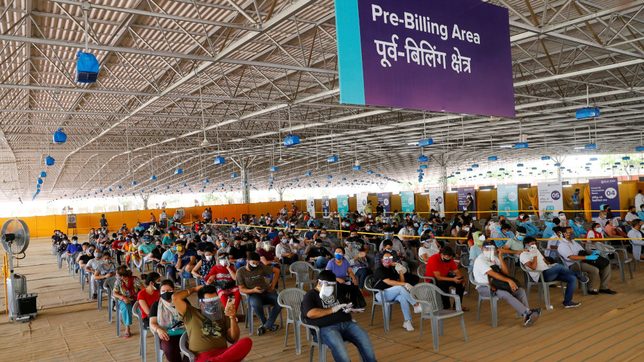 COVID-19 IN INDIA. People wearing protective face masks wait to receive a dose of COVISHIELD, a coronavirus disease vaccine manufactured by Serum Institute of India, at a vaccination centre in New Delhi, India, May 4, 2021.

In India’s capital, Delhi, thousands of commuters crowded into underground train stations and shopping malls on Tuesday, June 15, prompting some doctors to warn it could lead to a resurgence in COVID-19 infections.

Major Indian cities have begun lifting strict lockdowns as the nationwide tally of new infections has dropped to its lowest level in more than two months.

But disease experts and doctors have cautioned that a race towards resuming business as usual would compromise vaccination efforts as only about 5% of all 950 million eligible adults have been inoculated.

Doctors say Delhi’s near-complete re-opening is concerning. The city’s authorities have said they would reimpose strict curbs if cases rise.

Thousands died in the capital in May, as oxygen supplies all but vanished and families pleaded on social media over scarce hospital beds.

People paid 20 times the usual price to secure ambulances and hearses, many died in parking lots, and morgues ran out of space.

“Delhi’s top #mall saw a footfall of 19,000 people last weekend- as soon as it reopened. Have we gone totally mad?” Ambrish Mithal of Max HealthCare in New Delhi said on Twitter. “Wait for #COVID19 to explode again – and blame the government, hospitals, country.”

In the early hours of Tuesday, Delhi’s underground rail network put out alerts on Twitter about peak traffic and longer waits, responding to angry commuters angry about long queues.

After a strict five-week lockdown in Delhi, authorities have fully re-opened shops and malls, and allowed restaurants to have 50% seating. Suburban rail networks can run at 50% capacity, and offices have been partially reopened.

Vaccinations have slowed, however; the city government said inoculation centers for people ages 18-44 would start shutting down on Tuesday, as doses were scarce.

“Delhi ought to have unlocked far more scientifically. We are inviting trouble!” Arvinder Singh Soin, a surgeon and leading liver transplant specialist, said on Twitter.

Nationwide, India reported 60,471 new COVID-19 infections over the past 24 hours, the lowest number since March 31, data from the health ministry showed.