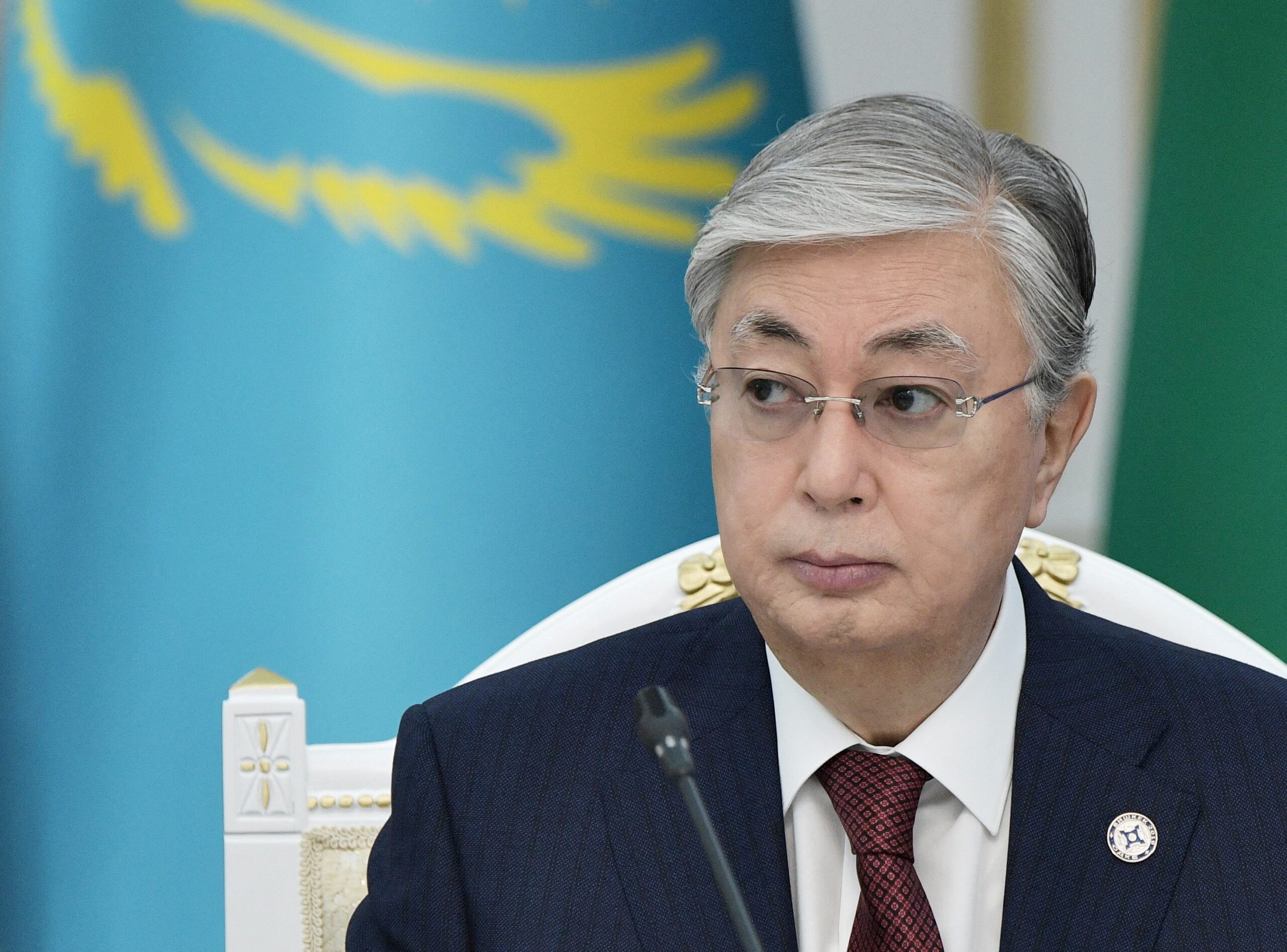 PRESIDENT'S ORDER. In this file photo, Kazakh President Kassym-Jomart Tokayev attends a session of the Council of the Collective Security Treaty Organization in Bishkek, Kyrgyzstan, on November 28, 2019.

ALMATY, Kazakhstan – Security forces appeared to have reclaimed the streets of Kazakhstan’s main city on Friday, January 7, after days of violence, and the Russian-backed president said he had ordered his troops to shoot to kill to put down a countrywide uprising.

A day after Moscow sent paratroopers to help crush the insurrection, police were patrolling the debris-strewn streets of Almaty, although some gunfire could still be heard.

Dozens have died and public buildings across Kazakhstan have been ransacked and torched in the worst violence the former Soviet republic has experienced in 30 years of independence.

Moscow said more than 70 planes were ferrying Russian troops into Kazakhstan, and that these were now helping control Almaty’s main airport, recaptured on Thursday, January 6, from protesters.

The uprising has prompted a military intervention by Moscow at a time of high tension in East-West relations as Russia and the United States gear up for talks next week on the Ukraine crisis.

“The militants have not laid down their arms, they continue to commit crimes or are preparing for them,” Tokayev, 68, said in a televised address.

“Whoever does not surrender will be destroyed. I have given the order to law enforcement agencies and the army to shoot to kill, without warning.”

The demonstrations began as a response to a fuel price hike but swelled into a broad movement against the government and former President Nursultan Nazarbayev.

Nazarbayev, 81, was the longest-serving ruler of any ex-Soviet state until he turned over the presidency to Tokayev in 2019. His family is widely believed to have retained influence in Nur-Sultan, the purpose-built capital that bears his name.

Russian President Vladimir Putin has discussed the situation with Tokayev in several phone calls during the crisis, the Kremlin said on Friday.

The protesters in Almaty appear mainly to come from the city’s poor outskirts or surrounding towns and villages. The violence has come as a shock to urban Kazakhs, used to comparing their country favorably to more repressive and volatile ex-Soviet Central Asian neighbors.

“At night when we hear explosions, I am scared,” a woman named Kuralai told Reuters. “It hurts to know that young people are dying. This has clearly been planned … probably our government has relaxed somewhat.”

In a state where scant political opposition is tolerated, no high-profile leaders of the protest movement have emerged to issue any formal demands.

One man who attended the first night of protests and who did not want to be identified said most of those who initially turned up wanted to “express solidarity spontaneously,” before 100-200 “aggressive youths” started hurling rocks at police.

The Interior Ministry said 26 “armed criminals” had been “liquidated,” while 18 police and national guard members had been killed. Those figures appeared not to have been updated since Thursday.

Fresh gunfire could be heard on Friday near the main square in Almaty, where troops had fought protesters on Thursday. Armored personnel carriers and troops occupied the square.

Pro-government politician Yermukhamet Yertysbayev, speaking on state television, suggested there were traitors within the ranks of Kazakhstan’s security forces.

He said the security forces had been ordered to leave the Almaty airport before militants seized it, and that the National Security Committee building had been left undefended, allowing protesters to gain access to weapons.

Unrest has been reported in other cities, but the internet has been shut off since Wednesday, January 5, making it difficult to determine the extent of the violence.

In Aktau, a city on the Caspian Sea in western Kazakhstan, some 500 protesters gathered peacefully on Friday in front of a government building to call for Tokayev’s resignation, a witness told Reuters.

State television said more than 60 people, including civilians, police and military, had been injured in the southern city of Shymkent since the unrest began, adding that the situation there was calm on Friday.

Moscow’s swift deployment demonstrated Putin’s readiness to use force to maintain influence in the former Soviet Union, at a time when he has also alarmed the West by massing troops near Ukraine, whose Crimean peninsula Russia seized in 2014.

The mission falls under the umbrella of the Collective Security Treaty Organization, comprising Russia and five ex-Soviet allies. Moscow said its force would number about 2,500.

White House spokeswoman Jen Psaki said Washington was watching Russia’s troops for any “actions that may lay the predicate for the seizure of Kazakh institutions”.

Tokayev’s administration said the Russians had not been engaged in combat or the “elimination of militants”.

Mukhtar Ablyazov, an exiled ex-banker and cabinet minister turned opponent of the government, told Reuters the West must counter Russia’s moves, or watch Putin “methodically impose his program – the recreation of a structure like the Soviet Union”.

Kazakhstan’s other major neighbor, China, has backed Tokayev. State television said President Xi Jinping had told him Beijing opposed any use of force to destabilise Kazakhstan.

Nazarbayev has not been seen or heard since the protests began. Tokayev removed Nazarbayev and his nephew from security posts on Wednesday.