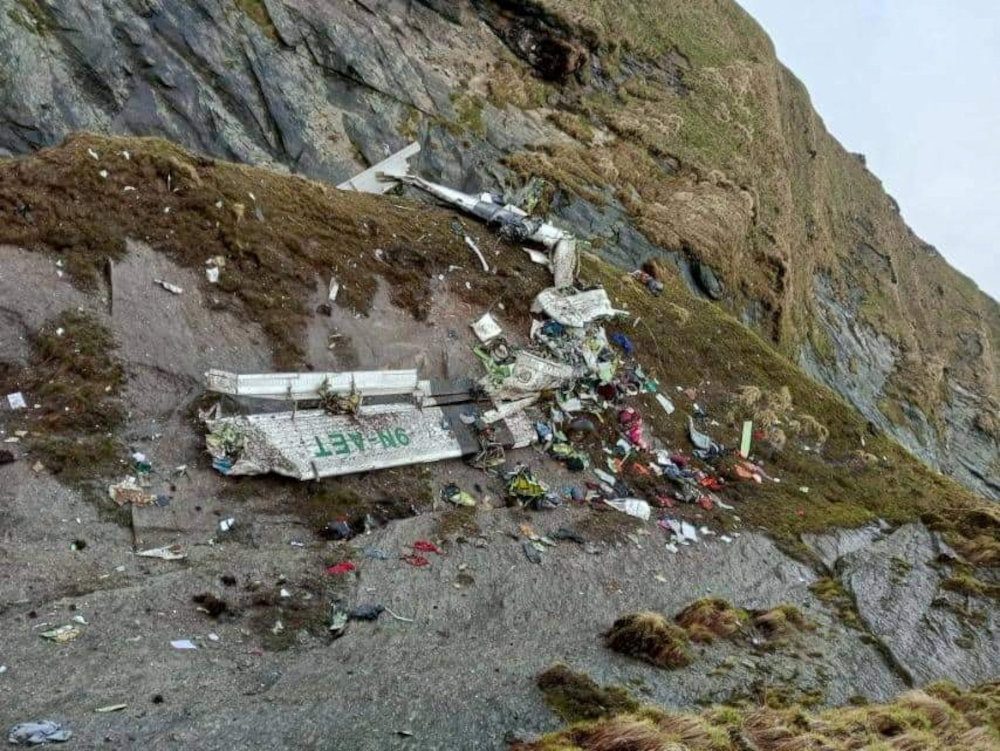 CRASH SITE. A general view of a Tara Air plane crash site during the rescue operation at Thasang, Nepal May 30, 2022.

KATHMANDU, Nepal – Rescue workers in Nepal on Monday, May 30, recovered 14 bodies as they scoured a remote Himalayan mountainside scattered with the wreckage of a small plane that crashed with 22 aboard, with officials saying the chance of finding survivors was slim.

Operated by privately owned Tara Air, the aircraft went down during cloudy weather on Sunday and was spotted by Nepal’s army earlier on Monday after search operations that were halted overnight were resumed.

“There is very little chance to find survivors,” said Deo Chandra Lal Karna, a spokesman for the Civil Aviation Authority of Nepal.

Tek Raj Sitaula, a spokesman for the Tribhuvan International Airport in Nepal’s capital Kathmandu, said bodies of 14 people had been found so far by rescue teams.

“The search for others is continuing,” Sitaula told Reuters.

The destination was Jomsom, a popular tourist and pilgrimage site that lies about 80 km (50 miles) northwest of Pokhara – usually a 20-minute flight.

But the aircraft – with four Indians, two Germans and 16 Nepalis aboard – lost contact with the Pokhara control tower five minutes before it was due to land, airlines officials said.

The crash site is in the region where Mount Dhaulagiri, the world’s seventh highest peak at 8,167 meters (26,795 feet) is located, in proximity to Nepal’s borders with China.

Soldiers from Nepal’s army and other rescue workers were operating in difficult mountainous terrain at an altitude of around 14,500 feet with a heavy cloud cover, officials said.

“There is very thick cloud in the area,” he told Reuters by phone. “The search for bodies is going on.”

Flight-tracking website Flightradar24 said the aircraft, with registration number 9N-AET, made its first flight in April 1979.

Nepal, home to eight of the world’s 14 highest mountains, including Everest, has a record of air accidents. Its weather can change suddenly and airstrips are typically located in mountainous areas that are hard to reach.

In early 2018, an US-Bangla Airlines flight from Dhaka to Kathmandu crashed on landing and caught fire, killing 51 of the 71 people on board. – Rappler.com