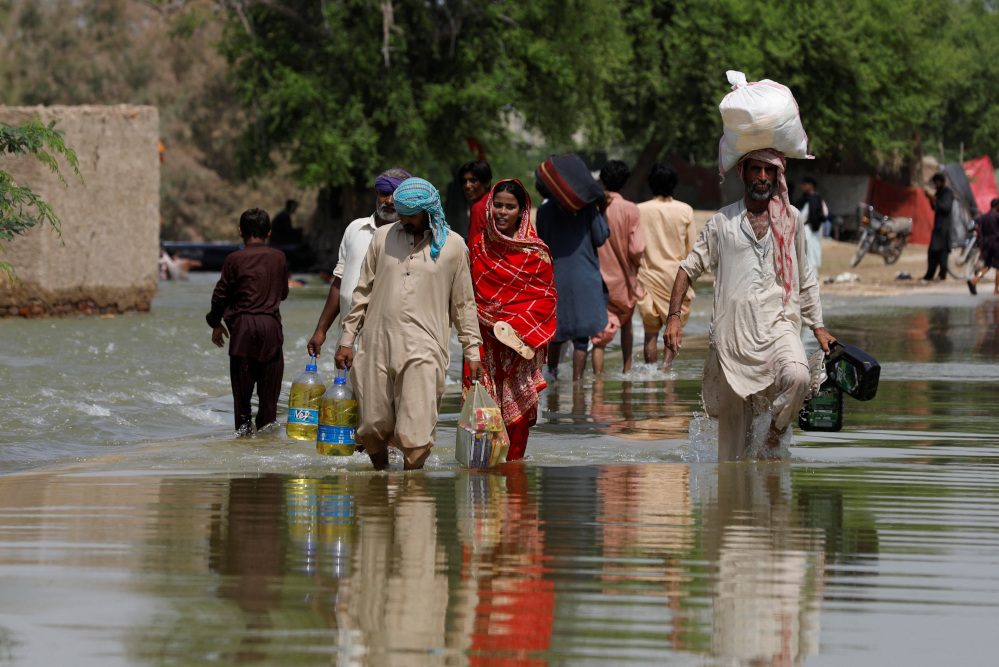 PAKISTAN FLOODING. Residents walk amid flood water as they head to their villages, following rains and floods during the monsoon season in Sehwan, Pakistan September 6, 2022.

JAMSHORO, Pakistan – Pakistan scrambled on Tuesday, September 6, to widen a breach in its biggest lake to prevent it from overflowing amid unprecedented floods that have inundated a third of the South Asian nation, as the United Nations warned of more misery to come.

Flooding, brought by record monsoon rainfall and glacier melt in the north, has impacted 33 million people and killed at least 1,325, including 466 children, the national disaster agency said.

About 636,940 displaced people have been housed in tent villages, it said, adding the raging waters had swept away 1.6 million houses, 5,735 kilometers of roads, railways, 246 bridges, telecommunication systems, 750,000 livestock, and inundated over two million acre of farmland, destroying both standing and stored crops.

The agency told the Cabinet that 81 districts out of a total of 160 had badly been affected by the floods.

Officials have estimated the economic cost of the losses at a minimum of $10 billion.

With more rain expected in the coming month, the situation could worsen, a top official of the United Nations’ refugee agency (UNHCR) warned.

“This will increase challenges for flood survivors, and likely worsen conditions for nearly half a million displaced people, forcing more to abandon their homes,” said Indrika Ratwatte, the agency’s director for Asia and the Pacific.

A key concern was the Manchar freshwater lake, the country’s largest, in Sindh province, which was close to bursting its banks.

Already, 100,000 people have been displaced in efforts to keep the lake from overflowing, and hundreds of thousands more could be affected if it breaches its banks, authorities said.

She said 856,000 patients had been treated since flooding began in July, mostly from field and mobile hospitals.

“Over 1200 of our health facilities are under water,” she said, adding the field hospitals were receiving nearly 20,000 diarrhea and 16,000 malaria cases daily.

The World Health Organization has said over 6.4 million people need humanitarian support in the flooded areas.

“Till yesterday there was enormous pressure on the dikes of Johi and Mehar towns, but people are fighting it out by strengthening the dikes,” district official Murtaza Shah said on Tuesday, adding that 80% to 90% population of the towns had already fled.

The floods have turned the nearby town of Johi into a virtual island, as a dike built by locals holds back the water.

“After the breach at Manchar, the water has started to flow, earlier it was sort of stagnant,” one resident, Akbar Lashari, said by telephone, following Sunday’s initial breach of the lake.

The floods have followed record-breaking summer heat. Pakistan and the United Nations both have blamed climate change for the extreme weather and resulting devastation.