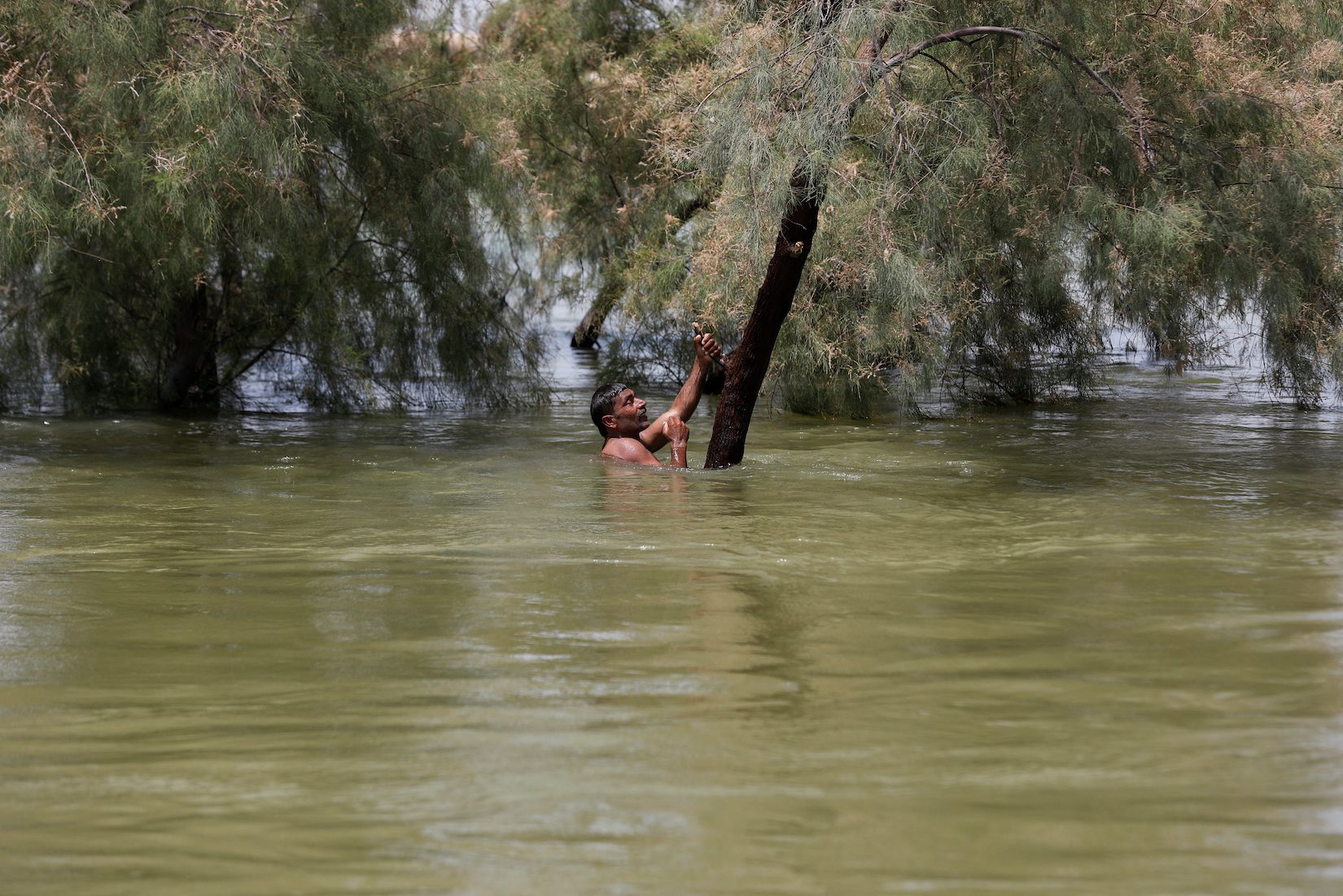 A man pauses while swimming amid flood waters, following rains and floods during the monsoon season in Sehwan, Pakistan September 6, 2022.

Facebook Twitter Copy URL
Copied
Hundreds of thousands have been forced from their homes in a disaster blamed on climate change and estimated to have caused losses of about $10 billion, disrupting the lives of nearly 33 million of a population of 220 million.

BHAN SYEDABAD, Pakistan – People were building barriers on Thursday, September 8, in some parts of Pakistan to hold back rising waters that have engulfed nearly a third of the country after weeks of rain, while officials said 12 more deaths took the toll to 1,355.

Hundreds of thousands have been forced from their homes in a disaster blamed on climate change and estimated to have caused losses of about $10 billion, disrupting the lives of nearly 33 million of a population of 220 million.

In the southern province of Sindh, one of the worst-hit regions, people worked to strengthen an existing dyke as floodwaters threatened the town of Bhan Syedabad.

Traffic choked the narrow road out of the town as residents fled to nearby villages after evacuating their houses.

“Helicopters are available to rescue the rich, but I had to hire a boat for 2,000 rupees to rescue my family,” 25-year-old Abdul Fahim, whose home flooded overnight, told Reuters, referring to a sum equivalent to $9.

A short distance away, Pakistan’s largest freshwater lake of Manchar is dangerously close to bursting its banks, as high water levels persist despite breaches by authorities to stave off further floods in an effort that displaced 100,000 people.

National disaster authorities said 12 deaths in the last 24 hours carried the toll to 1,355. Seven were children, who make up 481 of the dead.

The floods were brought by record monsoon rains and glacier melt in northern mountains. In July and August, Pakistan got 391 mm (15.4 inches) of rain, or nearly 190% more than the 30-year average, while Sindh got 466% more than the average.

The World Health Organization has said more than 6.4 million people need humanitarian support in the flooded areas. The United Nations has called for $160 million in aid.

“The secretary-general’s visit will further raise global awareness about the massive scale of this calamity and the resulting loss of life and widespread devastation,” Pakistan’s foreign ministry said in a statement.