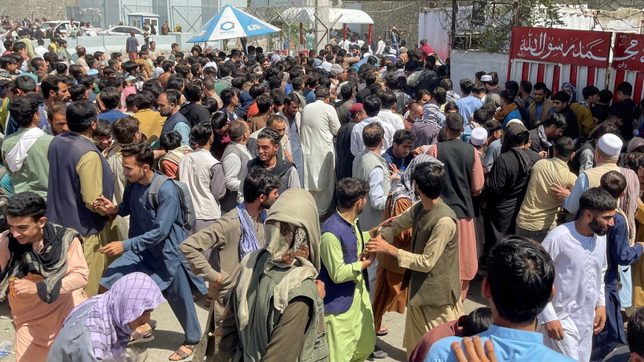 AT THE AIRPORT. People try to get into Hamid Karzai International Airport in Kabul, Afghanistan, on August 16, 2021.

Facebook Twitter Copy URL
Copied
'The US military’s focus at the moment is on safety and security at the airport and resuming air operations,' says Pentagon spokesperson John Kirby

US forces are working with Turkish and other international troops to clear Kabul airport to allow evacuation flights to resume, Pentagon spokesperson John Kirby said on Monday, August 16.

He told a news briefing Defense Secretary Lloyd Austin had authorized the deployment of another battalion to Kabul that would bring the number of troops guarding the evacuation to about 6,000.

Gunmen at the airport shot at US forces and US troops had shot dead two armed Afghans, Kirby said. He said there were preliminary indications that one US service member had been wounded.

Thousands of civilians desperate to flee Afghanistan thronged Kabul airport on Monday after the Taliban seized the capital, prompting the US military to suspend evacuations as the United States came under mounting criticism at home over its pullout.

Kirby said no flights were currently coming or going from the airport out of an abundance of caution and he did not know when they would resume, but US forces had control of air traffic control at Kabul.

Several hundred people had been flown out of the airport so far and the pace of evacuation would depend on the security situation, the spokesperson said.

“The US military’s focus at the moment is on safety and security at the airport and resuming air operations,” he said. – Rappler.com