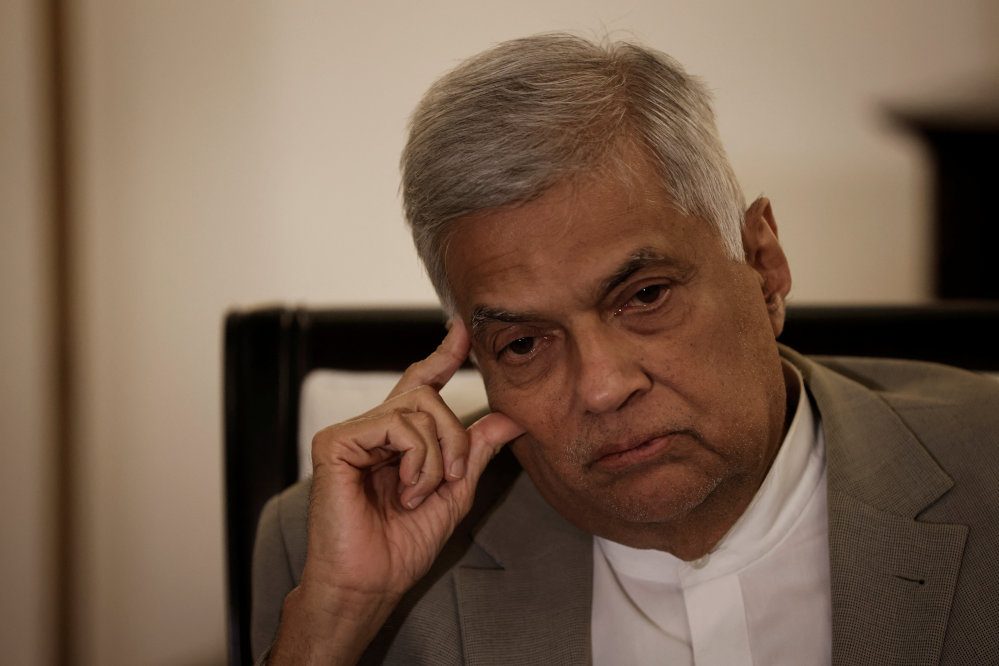 RANIL WICKREMESINGHE. Sri Lanka's Prime Minister Ranil Wickremesinghe gestures as he speaks during an interview with Reuters at his office in Colombo, Sri Lanka on May 24, 2022.

COLOMBO, Sri Lanka – Sri Lanka’s Prime Minister Ranil Wickremesinghe will hold dual charge as finance minister, the president’s office announced on Wednesday, May 25, and will lead talks with the International Monetary Fund (IMF) as the crisis-hit nation seeks a bailout.

“Prime Minister Ranil Wickremesinghe was sworn in as finance, economic stabilization and national policies minister before President Gotabaya Rajapaksa this morning,” a statement from the president’s office said.

In an interview with Reuters on Tuesday, Wickremesinghe laid out his immediate plans for the economy, including presenting an interim budget within six weeks that will slash government expenditure “to the bone” and re-route funds into a two-year relief program.

Sri Lanka, an island nation of 22 million people, is reeling under its worst economic crisis since independence in 1948, with a severe shortage of foreign exchange severely curtailing imports, including essentials such as fuel and medicines.

The turmoil has come from the confluence of the COVID-19 pandemic ravaging the country’s lucrative tourism industry and foreign workers’ remittances, ill-timed tax cuts by Rajapaksa draining government coffers and rising oil prices.

On Tuesday, the World Bank said it is not planning to provide any new financing to Sri Lanka until an adequate economic policy framework has been put in place.

Trade Minister Ramesh Pathirana told Reuters the new budget “will set out a path for multilateral institutions and other lenders to track public finance targets and hopefully extend support to Sri Lanka”.

In the interview, Wickremesinghe said he hoped for a “sustainable loan package” from the IMF, while undertaking structural reforms that would draw new investments into the country.

Initial discussions with the IMF ended on Tuesday. Earlier this week, IMF Managing Director Kristalina Georgieva said the lender was “working relentlessly” at a technical level on Sri Lanka.

Sri Lanka has also been officially declared in default by ratings agencies after the non-payment of coupons on two of its sovereign bonds. It has hired heavyweight financial and legal advisers Lazard and Clifford Chance as it prepares for the difficult task of renegotiating its $12 billion of overseas debt.

Wickremesinghe, 73, is a veteran politician who has been prime minister five times before the current appointment.

The economic liberal already has experience with the IMF – Sri Lanka last had an IMF program in 2016 during one of his tenures as prime minister.

He has also built relationships with regional powers India and China, key investors and lenders who vie for influence in Sri Lanka, which lies along busy shipping routes linking Asia to Europe.

The problem is that any economic reforms Wickremesinghe may bring to meet conditions for an IMF program could cause short-term pain and trouble on the streets. Petrol and diesel price increases announced on Tuesday are bound to feed through to transport and food prices.

Annual inflation is already at 33.8% and could go above 40%, Wickremesinghe has said.

Udeeshan Jonas, chief strategist for market research firm Capital Alliance, said Wickremesinghe retaining the finance portfolio was largely expected. But Jonas added: “With or without support, difficult measures will have to be taken. He has no other choice.”

Demonstrations have roiled Sri Lanka since late March, with protesters accusing the president and his powerful family of mishandling the economy.

Violence broke out two weeks ago after clashes between government supporters and protesters in Colombo sparked clashes across the country that left 9 people dead and about 300 injured. Mahinda Rajapaksa, the president’s elder brother, resigned as prime minister after the violence.

President Rajapaksa and Wickremesinghe have since tried to cobble together a new cabinet of ministers, drawing members from the ruling party and some opposition groups.

But the critical finance ministry portfolio has, so far, remained vacant, with some likely candidates declining the job, according to government and ruling party sources.

Ali Sabry, the previous finance minister who started talks with the IMF in April, quit in early May when the cabinet was dissolved after Prime Minister Rajapaksa resigned.

“The finance minister’s appointment is extremely crucial because he needs to get the ball rolling on a new budget, talks with the IMF and spearhead fiscal support,” said Lakshini Fernando, macro-economist for Sri Lanka-based investment firm Asia Securities.

“Ranil Wickremesinghe is the better option, but we’ll have to see if he has a majority in parliament and if he can do the job of both the prime minister and finance minister.” – Rappler.com