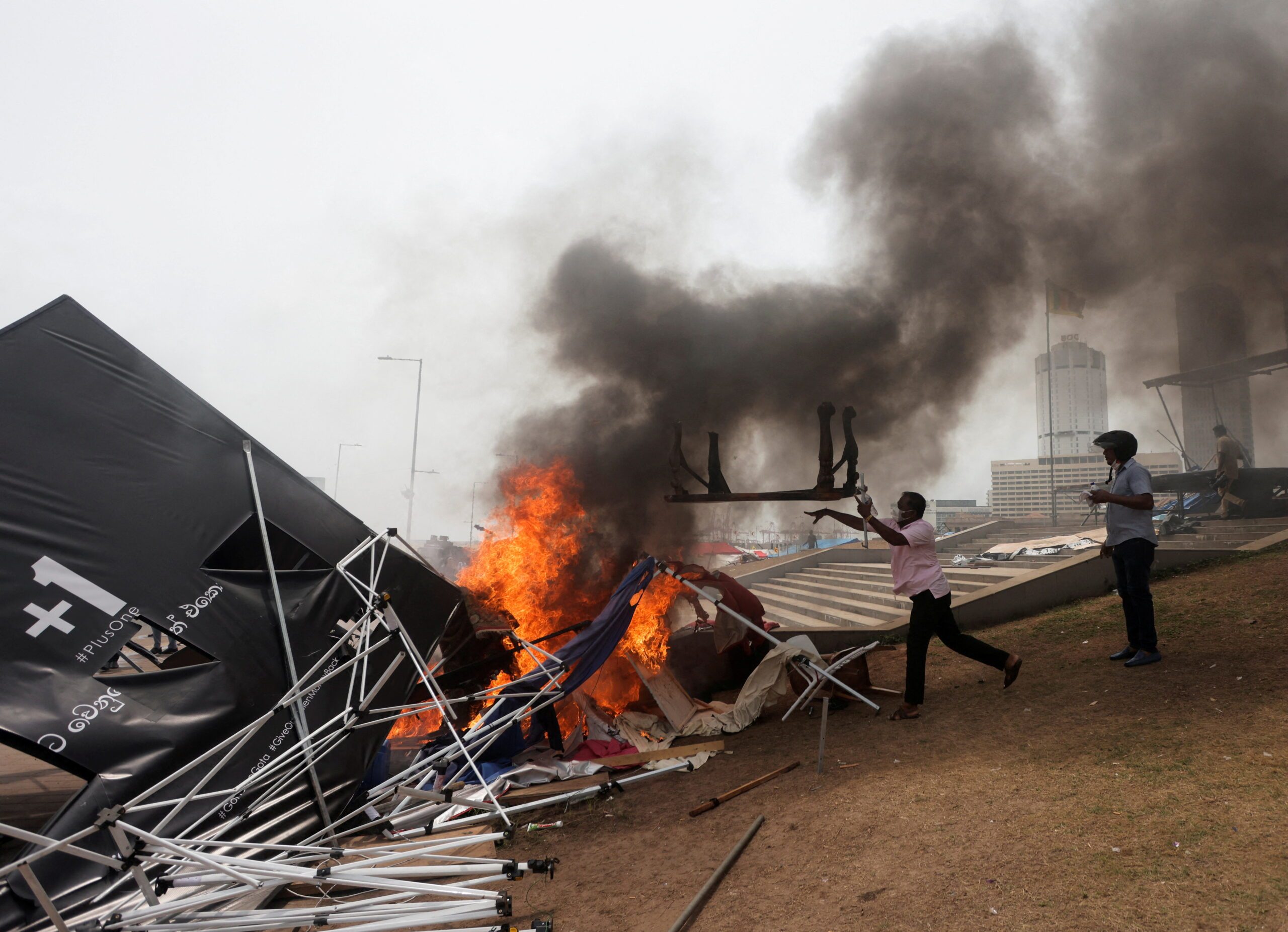 CLASH. Supporters of Sri Lanka's ruling party set fire the Gotagohome village, which was set up by anti-government demonstrators, during a clash between the two groups, amid the country's economic crisis, in Colombo, Sri Lanka, May 9, 2022.

COLOMBO, Sri Lanka – Sri Lanka’s prime minister resigned on Monday, May 9, hours after clashes with pro- and anti-government demonstrators in the commercial capital Colombo amid the country’s worst economic crisis that has spurred protests by thousands.

During weeks of unprecedented demonstrations, protesters across the island nation of 22 million people have demanded that President Gotabaya Rajapaksa and his elder brother, Prime Minister Mahinda Rajapaksa, quit for mishandling the economy.

In a statement, the prime minister’s office said the 76-year-old veteran politician had resigned.

“A few moments ago, Prime Minister Mahinda Rajapaksa sent his letter of resignation to President Gotabaya Rajapaksa,” the statement said.

In the letter, a copy of which was seen by Reuters, the prime minister said he was quitting to help form an interim, unity government.

“Multiple stakeholders have indicated the best solution to the present crisis is the formation of an interim all-party government,” the letter said.

“Therefore, I have tendered my resignation so the next steps can be taken in accordance with the Constitution.”

His departure came during a day of chaos and violence which culminated in police imposing a curfew across the country.

The confrontation began with hundreds of ruling party supporters rallying outside the prime minister’s official residence before marching to an anti-government protest site outside the presidential office.

Police had formed a line ahead of time on the main road leading towards the site but did little to stop pro-government protesters from advancing, according to a Reuters witness.

Pro-government supporters, some armed with iron bars, attacked anti-government demonstrators at the “Gota Go Gama” tent village that sprang up last month and became the focal point of nationwide protests.

Police used tear gas rounds and water cannons to break up the confrontation, the first major clash between pro-and anti-government supporters since the protests began in late March.

At least nine people were taken to Colombo’s National Hospital for treatment relating to injuries or tear-gas inhalation, a hospital official said, declining to be named.

“This is a peaceful protest,” Pasindu Senanayaka, an anti-government protestor told Reuters. “They attacked Gota Go Gama and set fire to our tents.”

“We are helpless now, we are begging for help,” Senanayaka said, as black smoke spiraled out of a burning tent nearby and parts of the protest camp lay in disarray.

Dozens of paramilitary troops with riot shields and helmets were deployed to keep both groups apart after the initial clashes. The army said it had also deployed soldiers in the area.

The government has approached the International Monetary Fund for a bailout, and will begin a virtual summit on Monday with IMF officials aimed at securing emergency assistance.

Sri Lanka needs at least 40,000 tons of gas each month, and the monthly import bill would be $40 million at current prices.

“We are a bankrupt nation,” said WHK Wegapitiya, chairman of Laugfs Gas, one of the country’s two main gas suppliers.

“Banks don’t have sufficient dollars for us to open lines of credit and we cannot go to the black market. We are struggling to keep our businesses afloat.” – Rappler.com