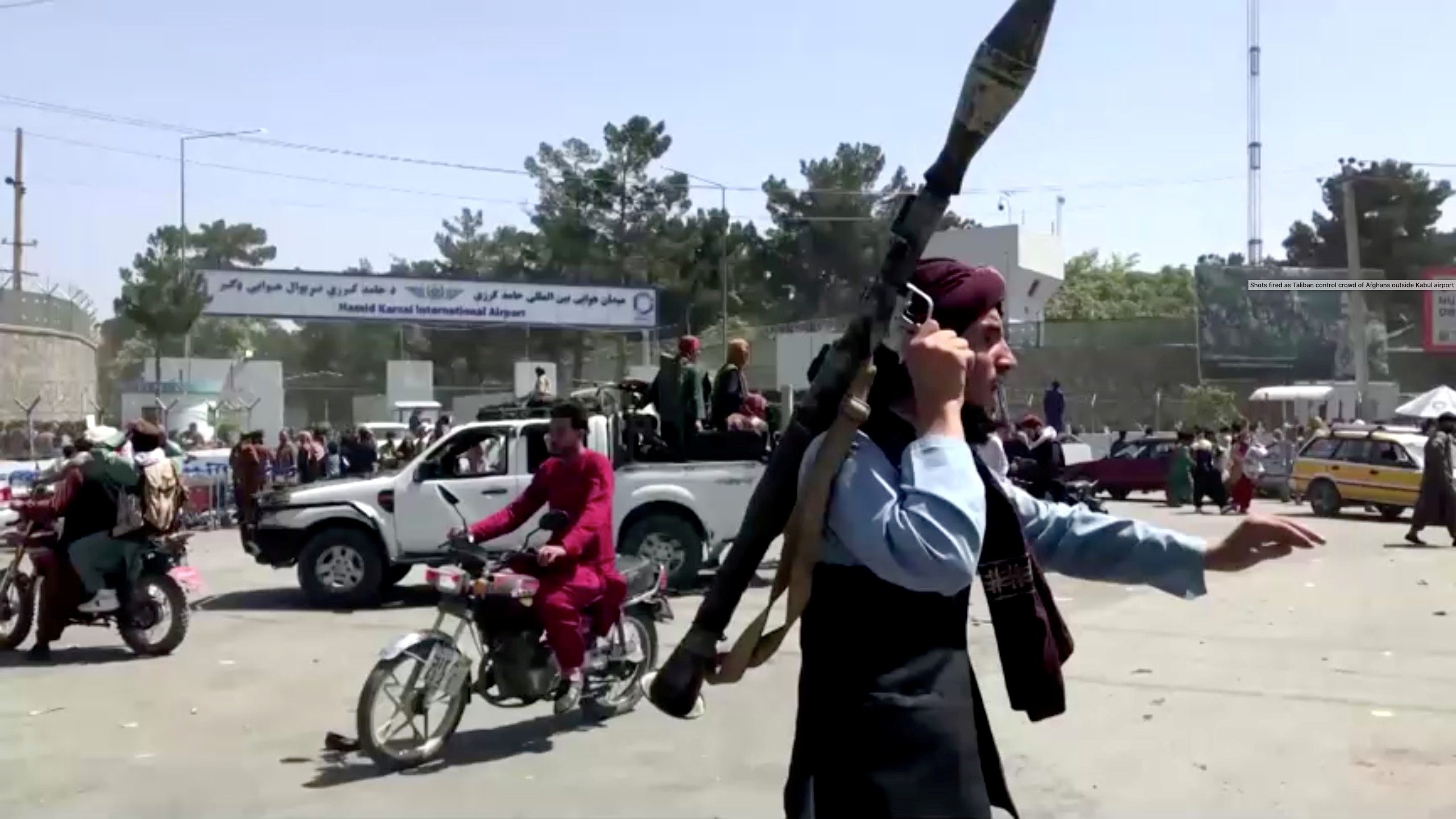 FILE PHOTO: A Taliban fighter runs towards crowd outside Kabul airport, Kabul, Afghanistan August 16, 2021, in this still image taken from a video.

Facebook Twitter Copy URL
Copied
(1st UPDATE) Women would be allowed to work and study and 'will be very active in society but within the framework of Islam,' says Taliban spokesperson Zabihullah Mujahid

The Taliban said on Tuesday, August 17, they wanted peaceful relations with other countries and would respect the rights of women within the framework of Islamic law, as they held their first official news briefing since their lightning seizure of Kabul.

The Taliban announcements, short on details but suggesting a softer line than during their rule 20 years ago, came as the United States and Western allies resumed evacuating diplomats and civilians the day after scenes of chaos at Kabul airport as Afghans thronged the runway.

A White House official said military flights had evacuated about 1,100 Americans from Kabul on Tuesday.

As they consolidated power, the Taliban said one of their leaders and co-founders, Mullah Abdul Ghani Baradar, had returned to Afghanistan for the first time in more than 10 years. Baradar was arrested in 2010, but released from prison in 2018 at the request of former US President Donald Trump’s administration so he could participate in peace talks.

Women would be allowed to work and study and “will be very active in society but within the framework of Islam,” he added.

As they rushed to evacuate, foreign powers assessed how to respond after Afghan forces melted away in just days, with what many had predicted as the likely fast unraveling of women’s rights. “If (the Taliban) want any respect, if they want any recognition by the international community, they have to be very conscious of the fact that we will be watching how women and girls and, more broadly, the civilian community is treated by them as they try to form a government,” US Ambassador to the United Nations Linda Thomas-Greenfield told MSNBC on Tuesday.

US President Joe Biden and British Prime Minister Boris Johnson said they had agreed to hold a virtual meeting of Group of Seven leaders next week to discuss a common strategy and approach to Afghanistan.

During their 1996-2001 rule, also guided by Islamic sharia law, the Taliban stopped women from working. Girls were not allowed to go to school and women had to wear all-enveloping burqas to go out and then only when accompanied by a male relative.

The UN Human Rights Council will hold a special session in Geneva next week to address “serious human rights concerns” after the Taliban takeover, a UN statement said.

Ramiz Alakbarov, UN humanitarian coordinator for Afghanistan, told Reuters in an interview the Taliban had assured the United Nations it can pursue humanitarian work in Afghanistan, which is suffering from a drought.

The European Union said it would only cooperate with the Afghan government following the Taliban’s return to power if they respected fundamental rights, including those of women.

Afghan girls’ education activist Pashtana Durrani, 23, was wary of Taliban promises. “They have to walk the talk. Right now they are not doing that,” she told Reuters.

Several women were ordered to leave their jobs during the Taliban’s rapid advance across Afghanistan.

Mujahid said the Taliban would not seek retribution against former soldiers and government officials, and were granting an amnesty for former soldiers as well as contractors and translators who worked for international forces.

He also said families trying to flee the country at the airport should return home and nothing would happen to them.

Mujahid’s conciliatory tone contrasted with comments by Afghan First Vice President Amrullah Saleh, who declared himself the “legitimate caretaker president” and vowed not to bow to Kabul’s new rulers.

It was not immediately clear how much support Saleh enjoys in a country wearied by decades of conflict.

NATO Secretary General Jens Stoltenberg said the Taliban should allow the departure of all those who want to leave Afghanistan, adding NATO’s aim was to help build a viable state and warning the alliance could strike if the country again becomes a breeding ground for terrorism.

The decision by Biden, a Democrat, to stick to the withdrawal deal struck last year by his Republican predecessor Trump has stirred widespread criticism at home and among US allies.

Biden’s approval rating dropped by 7 percentage points to 46%, the lowest level of his seven-month-long presidency, according to a Reuters/Ipsos poll conducted on Monday. It also found that less than half of Americans liked how he has handled Afghanistan.

Biden said he had had to decide between asking US forces to fight endlessly or follow through on Trump’s withdrawal deal. He blamed the Taliban takeover on Afghan leaders who fled and the army’s unwillingness to fight.

Washington was blocking the Taliban from accessing any Afghan government funds held in the United States, including about $1.3 billion of gold reserves at the Federal Reserve Bank of New York, a Biden administration official said. – Rappler.com