Sri Lanka blasts: What we know so far 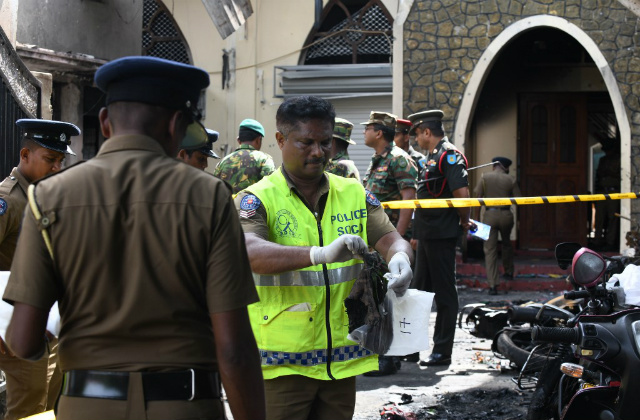 COLOMBO, Sri Lanka – Sri Lanka was rocked Sunday by a series of deadly blasts that killed more than 200 people and injured hundreds more.

Here is what we know so far about one of the deadliest attacks in the island nation's history:

Powerful explosions struck in quick succession at 3 hotels in the capital Colombo. The Cinnamon Grand was hit at around 8:30 am (0300 GMT), and the high-end Shangri-La soon after at 9:05 am.

Three churches were also targeted in that wave of blasts: Colombo's historic St Anthony's Shrine, the St Sebastian's church in the town of Negombo – north of the capital – and the Zion Church in the east-coast town of Batticaloa.

Hours later, there were two more blasts – one of them at another Colombo hotel. At least two of the 8 were carried out by suicide bombers, according to police sources and a hotel official.

The blasts hit the churches when they were full of worshippers gathered for Easter services. An Agence France-Presse photographer saw bodies and debris lying on the floor at St Anthony's.

A detailed breakdown of casualties in the 8 blasts and the nationalities of victims was not immediately available.

A Sri Lankan foreign ministry official said there were 27 bodies of suspected foreign nationals, while the police said at least 35 of the dead were foreigners.

Hospital sources said British, Dutch and American citizens were among those killed, with Britons and Japanese also injured. A Portuguese man also died, according to the Iberian nation's LUSA news agency. Two Chinese nationals were injured, the country's embassy in Sri Lanka said, according to Beijing's official Xinhua news agency.

There was no immediate claim of responsibility, and Prime Minister Ranil Wickremesinghe declined to identify any suspected perpetrators.

At least 3 people have been arrested in connection with the attacks, police said, without providing further details.

The island nation has suffered deadly militant attacks for years, especially by ethnic Tamil militants during a decades-long civil war that ended in 2009 when Sri Lankan forces crushed the insurgency.

In recent years, there have been clashes between the majority Sinhalese Buddhist community and minority Muslims, and in March last year the government imposed a 12-day state of emergency to quell anti-Muslim riots.

And, according to documents seen by Agence France-Presse, the country's police chief warned top officers 10 days ago of possible suicide bomb attacks on churches and the Indian high commission by the National Thowheeth Jama'ath (NTJ), a radical Muslim group in Sri Lanka. He cited reports by a "foreign intelligence agency," according to the documents.

How did Sri Lanka react?

The government beefed up security and imposed an immediate and indefinite curfew across the country. It also put in place a "temporary" ban on social media platforms "in order to prevent incorrect and wrong information being spread."

Security at Colombo's airport was also enhanced, according to Sri Lankan Airlines, which advised its passengers to arrive 4 hours before their flights. It added that passengers with passports and tickets will be able to reach the airport during the curfew.

Embassies in Sri Lanka have warned their citizens to shelter in place. – Rappler.com