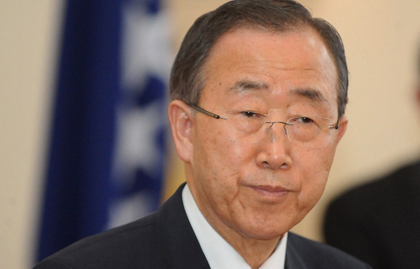 SARAJEVO, Bosnia-Herzegovina - UN chief Ban Ki-moon on Wednesday urged the world "to stop the slaughter in Syria" as dozens of international observers pulled out from the country.

"I make a plea to the world: 'Do not delay... Act now to stop the slaughter in Syria'," the UN secretary-general told parliament in Bosnia, the Balkans country that suffered a genocide in Srebrenica in 1995.

The UN chief was due to visit the site of the Srebrenica massacre on Thursday, the first secretary-general of the world body to do so.

Bosnian Serb troops on July 11, 1995 brushed aside lightly-armed Dutch peacekeepers and overran the UN-protected enclave. In the days that followed they killed nearly 8,000 Muslim men and boys and buried them in mass graves.

In the Bosnian parliament, Ban said the UN at the time "did not live up to its responsibility" and that the "international community failed to prevent genocide" in Srebrenica.

"Today the international community is being tested in Syria," Ban said. "The echoes are deafening: An accelerated slide to civil war. Growing sectarian strife. Villages and children butchered."

His plea came after the UN said it had pulled half of its troubled observer mission from Syria.

The Syrian Observatory for Human Rights said meanwhile that the Syrian army and rebels had sent reinforcements to Aleppo as the battle for Syria's second city intensified.

"The United Nations is doing all that we can, but action, meaningful action, will take a concerted effort of the international community. Without unity there will be more bloodshed," Ban warned. - Agence-France Presse