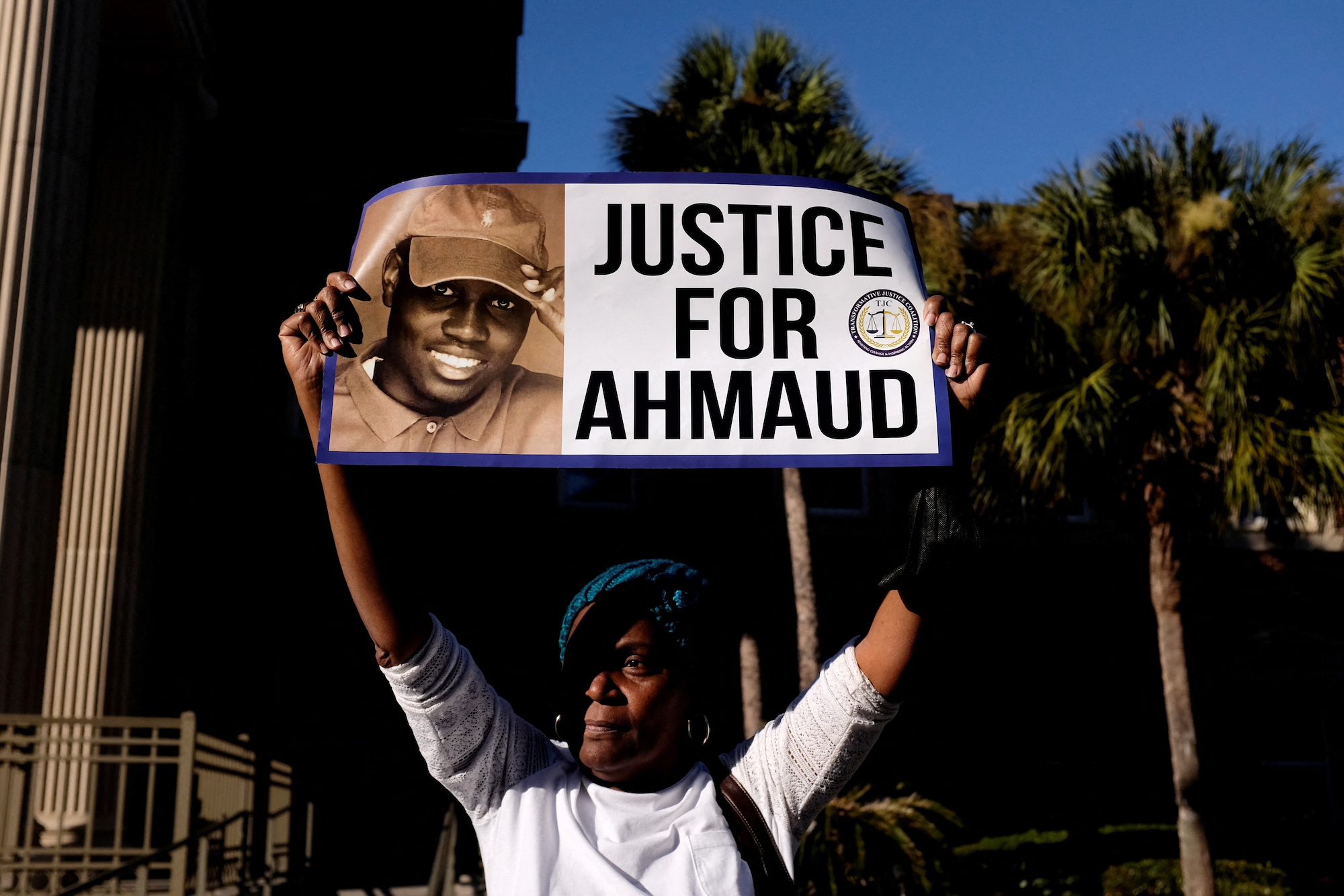 FILE PHOTO: A woman holds a sign outside the Glynn County Courthouse after the jury reached a guilty verdict in the trial of William "Roddie" Bryan, Travis McMichael and Gregory McMichael, charged with the February 2020 death of 25-year-old Ahmaud Arbery, in Brunswick, Georgia, U.S., November 24, 2021. REUTERS/Marco Bello/File Photo

Facebook Twitter Copy URL
Copied
Three white three men are found guilty of violating Ahmaud Arbery's civil rights by attacking him because of his race, and of attempted kidnapping

BRUNSWICK, Georgia, USA – The three white men convicted of chasing down and murdering a young Black man, Ahmaud Arbery, as he was out jogging in their suburban Georgia community, were found guilty on Tuesday, February 22, of committing federal hate crimes and other offenses in the 2020 killing.

A predominantly white jury deliberated for about four hours over two days before returning the verdict against Travis McMichael, 36, his father, former police officer Gregory McMichael, 66, and a neighbor, William “Roddie” Bryan, 52, in US District Court in Brunswick, Georgia.

All three men were found guilty of violating Arbery’s civil rights by attacking him because of his race, and of attempted kidnapping, capping the latest high-profile trial to probe issues of vigilantism and racial violence in America.

The McMichaels were additionally convicted of a federal firearms charge. Bryan was not charged with a weapons offense. The hate-crimes felony, the most serious of the charges the defendants faced, carries a maximum penalty of life in prison.

The three men were convicted last year of murder and other crimes in state court and sentenced to life terms for the shotgun slaying of Arbery, 25, a onetime high school football star who worked for a truck-washing company and his father’s landscaping business.

Prosecutors in the state trial avoided characterizing the killing as racist, seeking only to prove that the McMichaels and Bryan were responsible for his death.

Arbery was shot to death on February 23, 2020, by the younger McMichael after all three defendants had chased him down in pickup trucks as the victim was out for an afternoon jog through the community of Satilla Shores, near the southeastern coastal town of Brunswick.

The McMichaels insisted they did not act out of racial animus but out of self-defense and a belief that Arbery appeared suspicious when they saw him running through the streets after a series of neighborhood break-ins.

But trial testimony revealed there had been no burglaries, but thefts from unlocked cars. And federal prosecutors presented testimony from 20 witnesses and other evidence they said showed that the three men had long histories of using slurs and making racist statements. The defense rested its case after calling just one witness.

There was never any dispute that the younger McMichael fired his shotgun three times at Arbery at close range.

The killing was captured in a graphic cellphone video recorded by Bryan, stoking public outrage when it surfaced on social media more than two months later with no arrests yet made, even though Travis McMichael had admitted to police at the scene that he gunned down Arbery.

Civil rights activists pointed to the lag time in arrests of the three men as the latest example of law enforcement allowing white perpetrators to go unpunished in the unjustified killing of Black people.

Arbery’s name became entwined with a host of others invoked in a summer of protests against racial injustice across the United States after another unarmed Black man, George Floyd, was killed by a white police officer kneeling on Floyd’s neck until he could no longer breathe in May 2020. The federal prosecution of Arbery’s killers is the first in which those who committed such a high-profile murder are facing a jury in a hate-crime trial.

The two McMichaels had agreed last month to plead guilty to the federal hate-crimes offense, and the son acknowledged at a federal court hearing that he singled out Arbery because of his “race and color.”

But Judge Lisa Wood rejected the plea bargain because it bound her to a 30-year sentence that prosecutors had agreed would be served in a federal lockup before the men were returned to the Georgia prison system, widely perceived as a tougher environment for inmates compared with federal penitentiaries.

The plea deals were then withdrawn, and all three defendants proceeded to trial. – Rappler.com