Alongside Zelenskiy, Biden urges continued solidarity with Ukraine in 2023 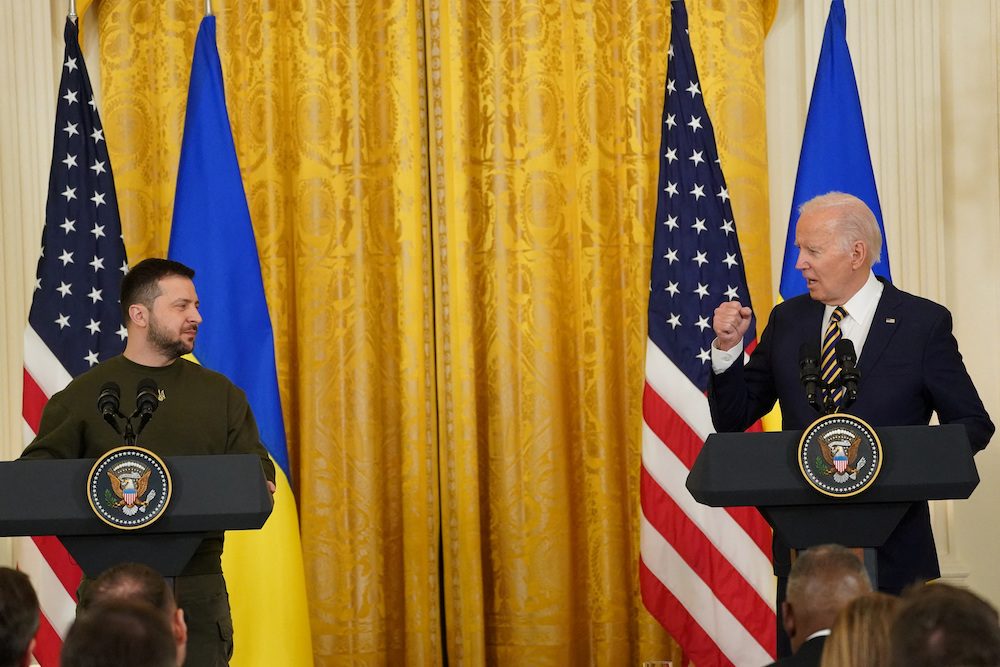 TOGETHER. US President Joe Biden and Ukraine's President Volodymyr Zelenskiy hold a joint news conference in the East Room of the White House in Washington, US, December 21, 2022.

President Joe Biden stood with Volodymyr Zelenskiy at the White House on Wednesday, December 21, during the Ukrainian leader’s first wartime visit to urge Americans and the world to keep backing Kyiv in 2023, when congressional approval for aid will be harder.

The United States has sent about $50 billion in assistance to Kyiv as Europe’s biggest land conflict since World War Two drags on, killing tens of thousands of people, driving millions from their homes and reducing cities to ruins.

But some Republicans, who will take control of the House of Representatives on Jan. 3, have expressed concerns about the price tag, and European countries have suffered due to energy problems and the hit to the global economy.

“As we head into the New Year, it’s important for the American people, and for the world, to hear directly from you Mr President about Ukraine’s fight and the need to continue to stand together through 2023,” said Biden at a news conference.

Neither NATO nor the European Union have been more united than about Ukraine, he added.

“The United States will stand up for our shared values, the values of freedom,” said Zelenskiy, wearing his trademark olive green pants and sweater.

“I believe that despite any changes in the composition of Congress, bicameral and bipartisan support will be maintained.”

Zelenskiy, who will seek more support during the trip, is due to address a joint session of the U.S. Senate and House of Representatives and meet Democratic and Republican leaders there.

Some hard-line Republicans have urged an end to the aid for Ukraine, instead calling for an audit to trace how the money previously allocated has been spent.

Zelenskiy has repeatedly called on the West to supply more advanced weaponry, ranging from modern battle tanks to missile defence systems, but Western allies have been cautious, keen to minimise any risk of provoking wider conflict with Russia.

Zelenskiy earlier presented Biden with a medal offered by a captain of a HIMARS rocket unit and expressed gratitude for the U.S. president’s role in helping Ukraine and rallying support.

Ukraine in recent weeks has come under intense Russian missile and drone bombardment to disrupt its energy infrastructure, leaving millions of people without electricity or running water in winter. Ukraine typically experiences long, cold winters with mean temperatures several degrees below zero Celsius and lows down to -20 Celsius.

Moments before Zelenskiy arrived, the US State Department announced the latest package of security assistance to Ukraine worth $1.85 billion and including Patriot missiles, deemed to be one of the most advanced US air defense systems.

At the White House, Zelenskiy held talks with Biden and his top national security aides, before participating in a joint news conference with Biden in the East Room, which was decked out with festive holiday decorations.

He then was proceeding to Capitol Hill to meet House of Representatives Speaker Nancy Pelosi and other lawmakers, and address a joint meeting of the US Senate and House.

Zelenskiy’s less than 12-hour visit came together largely over the past two weeks after the two leaders discussed Zelenskiy coming over in a Dec. 11 phone call. The White House three days later extended a formal invitation to him, the US official said.

Zelenskiy accepted the invitation last Friday and the visit was confirmed on Sunday.

At their news conference, Biden said it was important to have Zelenskiy visit “to look you in the eye.”

“President Zelenskiy, I’m honored to welcome you back to the White House,” said Biden. – Rappler.com