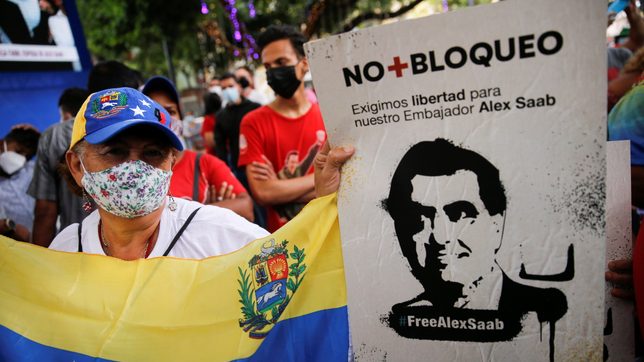 SUPPORTING ALEX SAAB. People gather in support of Alex Saab, a Colombian businessman and Venezuelan government envoy who was extradited from Cape Verde to the U.S. on charges of money laundering, in Caracas, Venezuela October 17, 2021.

Facebook Twitter Copy URL
Copied
Alex Saab's arraignment is set for November 1. He is accused of laundering money on behalf of Venezuela's government.

A US judge on Monday, October 18, set a November 1 arraignment date for Alex Saab, a businessman accused of laundering money on behalf of Venezuela’s government, in a case that pits the United States against the socialist government of President Nicolas Maduro.

US prosecutors in 2019 charged Saab in connection with a bribery scheme linked to Venezuela’s state-controlled exchange rate. They have accused Saab and an ally of siphoning around $350 million out of Venezuela and into overseas accounts via the United States.

Washington has also imposed sanctions on Saab over accusations he orchestrated a scheme that enabled him and Maduro to profit from a state-run food distribution program.

Saab’s lawyers have called the US charges “politically motivated.”

Saab, a 49-year old Colombian national, was arrested in June 2020 when his plane stopped to refuel in Cape Verde. The country’s courts approved his extradition following a lengthy legal battle.

Saab appeared during an initial hearing in an orange jumpsuit and blue face mask via videoconference before US Magistrate Judge John J. O’Sullivan in Miami on Monday.

Saab’s lawyer, Henry Bell, asked for the arraignment to be scheduled in two weeks, citing the need to brief his client as well as a pending appeal that says Saab was wrongfully arrested as he had diplomatic immunity.

Over the weekend in Caracas, Saab’s wife Camilla told a small government-led protest that her husband would fight the charges against him.

“My husband Alex Saab will never break down, never,” she said through tears, in a video posted online.

Following Saab’s extradition, Venezuela on Saturday said it would suspend talks with the opposition, citing its “deepest protest” against the treatment of Saab. In a televised speech on Monday, Maduro said he was “outraged” by Saab’s extradition and that he would evaluate what to do with the talks “later.”

The US government has repeatedly demanded the release of the group, which is made up of five naturalized US citizens and one permanent resident.

Tensions have increased between Washington and Caracas, long ideological foes, after former President Donald Trump in 2019 created a broad sanctions program meant to force Maduro from power amid an economic free-fall.

Venezuela’s government has accused the United States of kidnapping Saab, whom they describe as a diplomatic envoy who was en route to Iran to negotiate supplies of fuel and food that have been interrupted by US sanctions. The opposition says Saab was one of the chief beneficiaries of the country’s state controls and are hoping he will cooperate with US authorities.

“Many doubted that this day would come, because those who have looted Venezuela portray themselves as untouchable,” tweeted Carlos Vecchio, the envoy to the United States of Venezuelan opposition leader Juan Guaido. “But the day always comes.”