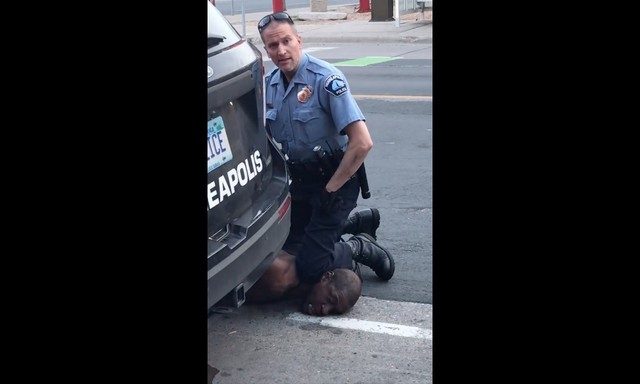 This still image taken from a May 25, 2020, video courtesy of Darnella Frazier via Facebook, shows a Minneapolis, Minnesota, police officer arresting George Floyd. - "The four Minneapolis police officers involved in Floyd's death have been fired," Minneapolis Mayor, Jacob Frey, said on Twitter on May 26, saying "it was the right decision. Witnesses say Floyd repeatedly tell the officers, I cannot breathe! after being pinned to the ground by an officer with his knee on Floyd's neck. (Photo by Darnella Frazier / Facebook/Darnella Frazier / AFP) / RESTRICTED TO EDITORIAL USE - MANDATORY CREDIT "AFP PHOTO / Facebook / Darnella Frazier" - NO MARKETING - NO ADVERTISING CAMPAIGNS - DISTRIBUTED AS A SERVICE TO CLIENTS

Facebook Twitter Copy URL
Copied
In a conference call with governors quickly leaked to several media outlets, Trump tells state leaders to 'dominate' and says they are 'going to look like a bunch of jerks' if they are too soft

An autopsy found Monday, June 1, that an African-American man whose death has set off nationwide unrest was suffocated by a police officer, contradicting a preliminary ruling, as cities including New York imposed or toughened curfews in expectation of fresh fury.

Violence has erupted for 3 straight nights outside the White House, where a holed-up Donald Trump has brushed aside the traditional unifying role of a president, and one person was shot dead in Louisville, Kentucky, whose mayor fired the police chief.

One week after George Floyd died in Minneapolis, an autopsy blamed his videotaped death squarely on a white police officer who pinned him down with his knee for nearly 9 minutes as Floyd pleaded, “I can’t breathe!” (READ: Officer charged with murder of black American, as protests spread)

“The evidence is consistent with mechanical asphyxia as the cause of death, and homicide as the manner of death,” Aleccia Wilson, a University of Michigan expert who examined his body at the family’s request, told a news conference.

An initial finding cited in a criminal complaint pointed to pre-existing conditions, outraging the family.

Shortly after the independent report, Hennepin County’s medical examiner released its official autopsy that called his death a homicide caused by “neck compression,” although it also said he was intoxicated and pointed to heart disease.

A memorial for Floyd will take place on Thursday in Minneapolis before a service in North Carolina and a funeral on June 9 in Houston, where he grew up, family lawyer Ben Crump said.

Floyd, 46, had been accused of trying to buy cigarettes with a counterfeit bill and his aggressive arrest was caught on a cellphone camera.

The autopsy revived demands for the arrest of 3 other police officers who stood guard for Chauvin as Floyd pleaded for his life.

“We are tired of this happening. This generation is not having it. We are tired of oppression,” said Muna Abdi, a 31-year-old African-American woman at a peaceful demonstration at the Minnesota capitol in St. Paul.

Pointing to her three-year-old son, she said: “I want to make sure he stays alive.”

Officer Derek Chauvin, who had remained in the police force despite persistent complaints about his behavior, had been due to appear in court on Monday but the judiciary said the initial hearing had been postponed to June 8.

The delay outraged many activists, although Minnesota has made clear that it seeks to punish Chauvin and has tasked the prosecution personally with the state’s attorney general, Keith Ellison, a prominent former US congressman.

New York, the famed “City that Never Sleeps,” became the latest city to impose a nighttime curfew after consecutive nights of tension that included looting and the trashing of parked cars.

In the upscale SoHo district, Elliot Kurland, owner of the Leica photography store, said his entire shop was emptied by looters including clients’ property. He estimated his loss at $1 million.

“I hope I have insurance,” he said.

“My brother heard about it. He called me. I had been about to come here at 3 o’clock in the morning. My brother warned me, ‘Don’t go down. You’ll get killed.'”

New York, like other cities, had just been emerging from weeks under lockdown from the coronavirus pandemic. Kurland said he was still paying employees who were not reporting to work.

More than 40 cities have imposed curfews. Washington’s mayor, Muriel Browser, said a curfew will start Monday at an unusually early 7 pm in hopes of preventing a repeat of the destruction in the US capital – which included a fire at St. John’s, the two-century-old “church of the presidents” across from the White House.

Apple, along with several other major retailers, temporarily closed most US stores, and California shut government offices in crowded areas as a precaution.

It was the most widespread unrest in the United States since 1968, when cities went up in flames over the slaying of civil rights icon Martin Luther King Jr., and rekindled memories of 1992 riots in Los Angeles after police were acquitted in the brutal beating of black motorist Rodney King.

But unlike in Los Angeles, the latest unrest has primarily targeted property, although both protesters and police have reported non-life-threatening injuries.

One person was killed, however, in Kentucky’s largest city Louisville.

Police chief Steve Conrad said officers and the National Guard “returned fire” just after midnight after being shot at as they dispersed a crowd in a parking lot.

The dead man was David McAtee, the owner of a popular barbecue business, according to the Louisville Courier Journal, which quoted his nephew.

Louisville, the home of Muhammad Ali and Kentucky Fried Chicken, has seen especially passionate protests due to the police killing in March of an African American woman, Breonna Taylor, in her own apartment.

The 26-year-old emergency room technician was shot dead after police barged into her home, alleging that drug dealers had used the apartment to receive packages.

Louisville Mayor Greg Fischer said Monday he had fired the police chief, Steve Conrad, because officers did not record body-camera of the episode.

While presidents traditionally seek to bridge national divides during tumult, Trump was again holed up at the White House tweeting attacks on his political rivals and the media.

In a conference call with governors that was quickly leaked to several media outlets, Trump told state leaders to “dominate” and said they were “going to look like a bunch of jerks” if they are too soft.

The governor of Illinois, J.B. Pritzker, is heard reprimanding Trump directly, saying he was “extraordinarily concerned” by the president’s “inflammatory” rhetoric.

Trump has blamed the violence on Antifa, the loosely organized collective of far-left activists who advocate aggressive action to stop what they see as the rise of fascism and white supremacists.

Joe Biden, Trump’s likely Democratic opponent in November elections, met Monday with black leaders at a church in his home of Wilmington, Delaware and promised to form a police oversight commission in his first 100 days as president.

“Hate just hides. Doesn’t go away. And when you have somebody in power who breathes oxygen into the hate under the rocks, it comes out from under the rocks,” Biden said. – Rappler.com