WE. LGBTQ+ activists and supporters hold a rally outside the US Supreme Court as it hears arguments in a major LGBTQ+ rights case on whether a federal anti-discrimination law that prohibits workplace discrimination on the basis of sex covers gay and transgender employees in Washington, US, October 8, 2019.

Facebook Twitter Copy URL
Copied
'It's unfortunate that such an obvious step had to be taken; the AMA welcomes this common-sense understanding of the law,' says American Medical Association President Susan Bailey

Gay and transgender people will be protected against sex discrimination in health care, the US health secretary said on Monday, May 10, as President Joe Biden’s administration reversed a policy put in place under his predecessor Donald Trump.

Health and Human Services Secretary Xavier Becerra said the action restores protections under a provision of the Affordable Care Act, also known as Obamacare, against sexual discrimination in health care. It was the latest in a series of steps the Democratic president has taken to bolster LGBTQ+ rights.

“It simply says what everyone already should know: You should not discriminate against people,” Becerra told CNN. “That includes those based on sexual orientation or gender identity and when it comes to health care – we want to make sure that’s the case.”

The new policy represents a reversal of a reversal. HHS under Trump in June 2020 issued a rule that lifted some anti-discrimination protections under the Affordable Care Act, a law signed by former President Barack Obama in 2010.

In 2016, Obama’s administration introduced rules that made clear that LGBTQ+ people would be protected under the federal healthcare discrimination provision. The Trump-era rule reversed those provisions of the law that extended civil rights protections in health care to cover areas including gender identity and abortion.

“So now it’s clear, there’s no ambiguity: You cannot discriminate against people based on sexual orientation or gender identity,” Becerra added. HHS said in a statement that its Office for Civil Rights made the decision in light of a June 2020 US Supreme Court ruling and subsequent court decisions. The Supreme Court last year delivered a watershed victory for LGBTQ+ rights and a defeat for Trump’s administration, ruling that a longstanding federal law barring workplace discrimination protects gay and transgender employees.

“The Supreme Court has made clear that people have a right not to be discriminated against on the basis of sex and receive equal treatment under the law, no matter their gender identity or sexual orientation,” Becerra said in the statement.

House of Representatives Speaker Nancy Pelosi, a Democrat, praised the administration’s step and called Trump’s LGBTQ+ action in the middle of the coronavirus pandemic “an act of senseless and staggering cruelty.”

The issue of transgender rights has become a flashpoint in the US culture wars, with Republicans at the state level pursuing measures targeting transgender people. Such bills have been introduced in about 28 states so far this year, according to the Southern Poverty Law Center advocacy group.

“With health care for transgender youth under attack by state legislatures, this move to protect LGBTQ+ people from discrimination in health care is critical,” the American Civil Liberties Union said.

“It’s unfortunate that such an obvious step had to be taken; the AMA welcomes this common-sense understanding of the law,” added American Medical Association President Susan Bailey.

Biden, who took office in January, has sought to overturn other Trump policies limiting the rights of LGBTQ+ Americans.

Biden has reversed his Republican predecessor’s ban on transgender people serving in the US military, issued an executive order that extends existing federal nondiscrimination protections to LGBTQ+ people, and issued a presidential memorandum aimed at expanding protection of the rights of LGBTQ+ people worldwide. – Rappler.com 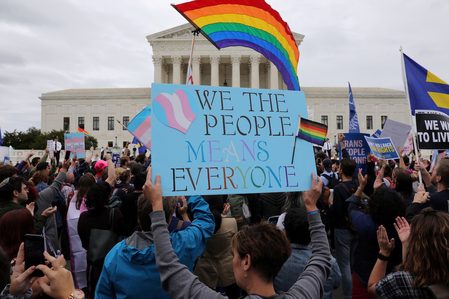