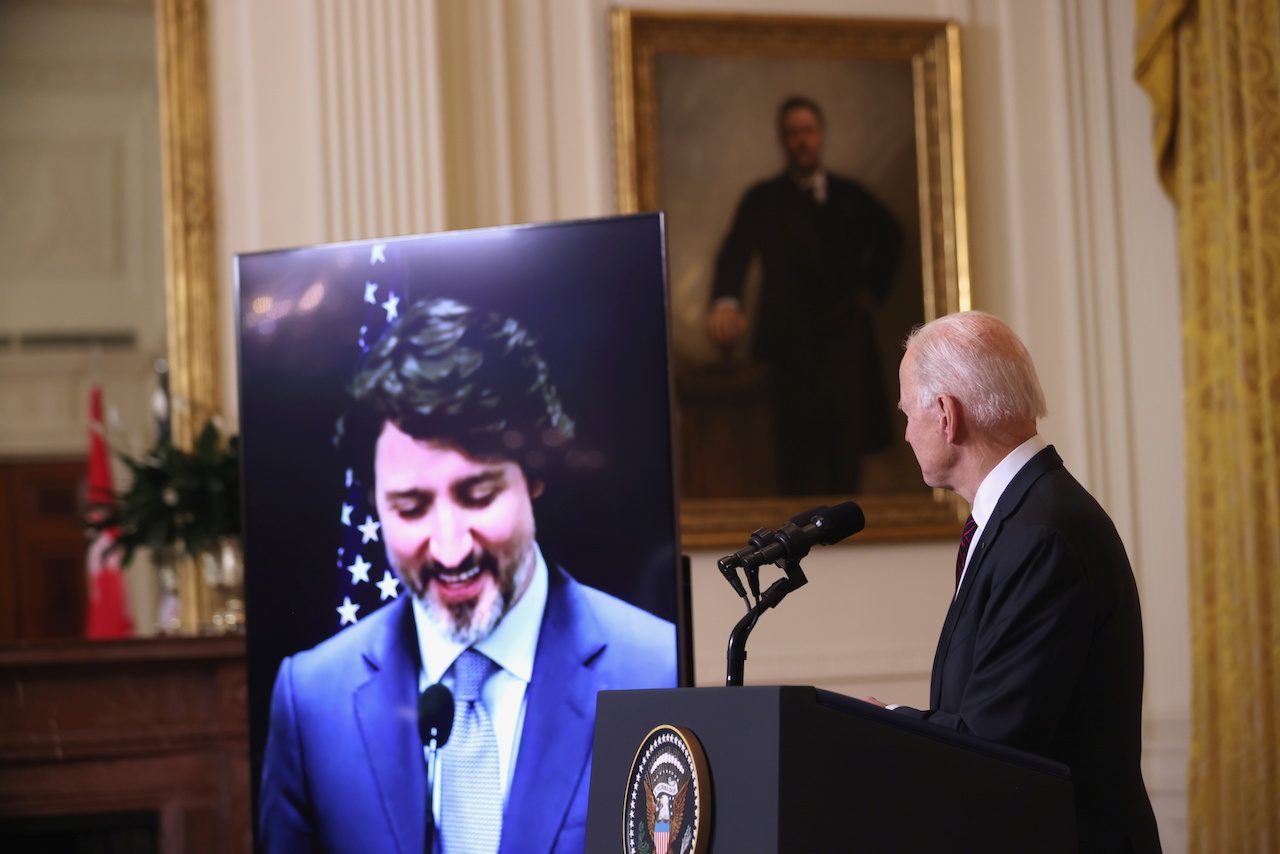 CALL. US President Joe Biden and Canada's Prime Minister Justin Trudeau, appearing via video conference call, give closing remarks at the end of their virtual bilateral meeting from the White House in Washington, DC, February 23, 2021.

US President Joe Biden and Canadian Prime Minister Justin Trudeau sought on Tuesday, February 23, to turn the page on the Trump era, stressing the countries’ deep ties and pledging to work together to counteract Chinese influence and address climate change.

“The United States has no closer friend, no closer friend than Canada,” Biden told Trudeau via an electronic video link with the Canadian leader and top aides. “That’s why you were my first call as president (and) my first bilateral meeting,” he said.

After talking for about two hours, the two leaders emerged and said they planned to work closely together to beat the COVID-19 pandemic and combat climate change, with a goal of achieving net-zero emissions by 2050.

Trudeau also thanked Biden for reiterating US support for the release of two Canadians held by China, Michael Spavor and Michael Kovrig. “Human beings are not bartering chips,” Biden said. “We’re going to work together until we get their safe return.”

Biden and Trudeau did not take questions after delivering their remarks.

“Thank you, again, for stepping up in such a big way on tackling climate change. US leadership has been sorely missed over the past years,” the prime minister said.

Canada has often been a US president’s first foreign stop, but the COVID-19 pandemic turned the sit-down between the two leaders and some of their top deputies into a virtual affair.

Biden, Vice President Kamala Harris, and other officials, all wearing dark masks, sat at a long table in a White House meeting room, near a large video screen beaming in Trudeau’s image from Ottawa.

A Canadian government source said there had been no progress on the possibility of Canada accessing COVID-19 vaccines produced in the United States. Canada is currently receiving doses from plants in Europe.

“We’re focused on ourselves, the United States is focused on itself. They feel they have a supply shortage, so there is no news on that front,” said the source, who requested anonymity given the sensitivity of the situation. But the two leaders made clear they wanted to put the dispute behind them and work together.

The meeting drew scrutiny as an early view of Biden diplomacy. “Everyone around the world is watching this meeting very closely. They will want to get what the Canadians got and they won’t all succeed. This is the top level of access, the gold standard,” a senior Western diplomat in Ottawa said.

“We feel we are off to the races here,” the Canadian government source added.

Trudeau was the first world leader to congratulate Biden when the Democrat was declared the winner of the November election, illustrating the degree to which the close US ally looks to move on from Trump’s 4 years in office.

The Republican former president, who often clashed with traditional allies on trade, imposed tariffs on Canadian aluminum and steel. He traveled only once to Canada for a G7 meeting in 2018, and blasted Trudeau for being “very dishonest and weak” after he left.

Another meeting with more officials followed. Trudeau was accompanied by his finance minister, Chrystia Freeland, and others.

The official said the White House had expected Trudeau to raise the issue of the two Canadians detained by Beijing and charged with espionage after Canada’s detention of Meng Wanzhou, chief financial officer of China’s Huawei Technologies Co Ltd , on a US arrest warrant.

Biden also said the leaders would work closely to strengthen supply-chain security and resilience, and to drive a robust post-pandemic “economic recovery that benefits everyone, not just those at the top.” – Rappler.com