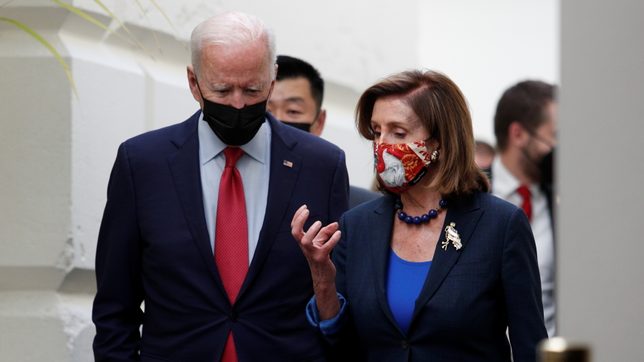 BIPARTISAN BILL. US President Joe Biden talks with Speaker of the House Nancy Pelosi as they walk out of a meeting held with Democratic lawmakers at the US Capitol to promote his bipartisan infrastructure bill on Capitol Hill in Washington, US, October 1, 2021.

In a rare visit to the US Capitol, President Joe Biden tried on Friday, October 1, to end a fight between the moderate and progressive wings of his Democratic Party that threatened to torpedo his domestic agenda.

Faced with a moderate faction that wanted an immediate vote on a $1-trillion infrastructure bill and a progressive arm that wanted to wait until there was agreement on a sweeping $3.5 trillion bill to bolster social spending and fight climate change, Biden sought to split the difference.

The former senator told his caucus during a 40-minute meeting that they could delay a vote on the smaller bill and sharply scale back the larger one to around $2 trillion. But his message that there was no rush belied the fact that Congress faces multiple approaching critical deadlines.

“It doesn’t matter whether it’s in six minutes, six days, or in six weeks. We’re going to get it done,” Biden said.

A source familiar with Biden’s remarks at the meeting said he told lawmakers, “Even a smaller bill can make historic investments.”

The delay comes at a bad time for Congress, which has a lot of work ahead in the next few weeks.

The Treasury Department estimates that it has until about October 18 for the government’s $28.4 trillion borrowing limit to be raised by Congress or risk a debt default with potentially catastrophic economic consequences. Then on December 3, the nation faces the risk of a government shutdown that could be politically damaging for Democrats.

By early next year, attention will focus on the midterm elections in November 2022, where history favors Republicans’ chances of recapturing a majority in Congress.

House Democrats confirmed late Friday there would be no vote on the infrastructure bill that day.

‘Have to come down’

The most vocal opponents to the proposed $3.5 trillion size of the social and climate bill are moderate Senate Republicans Joe Manchin and Kyrsten Sinema, either of whom has the ability to prevent a bill from passing.

With the Senate divided 50-50 between the parties, Democrats hold the majority by virtue of Vice President Kamala Harris’ tie-breaking votes. They aim to pass the larger bill without Republican support using a maneuver called “budgetary reconciliation.”

House progressives acknowledged after the meeting with Biden that the $3.5 trillion number would need to be scaled back, though Biden agreed to their demand of passing the two bills in lock-step. Progressives fear that passing the smaller bill first would doom the larger one’s chances.

“We’re going to have to come down on our number,” said Representative Pramila Jayapal, the influential chair of the 95-member Congressional Progressive Caucus.

But progressive Representative Jamie Raskin suggested there were ways to cut the bill’s price tag while preserving many of the programs Democrats want to include. The sweeping bill was to provide funding for universal preschool for all Americans, affordable housing, and making homes more energy-efficient.

“Maybe not everything can be funded for 10 years; maybe it’s going to be a lesser period of time,” Raskin said. “At least we’ll be able to develop these programs and make a commitment to the American people. Then we’ll be able to make a judgment after four years or five years about the programs and whether they are working.”

House of Representatives Speaker Nancy Pelosi had previously committed to moderates to vote on the infrastructure bill this week. She repeated those commitments on Thursday and Friday, but in the end her team canceled the vote.

In a letter to Democratic colleagues late on Friday, Pelosi said “great progress” had been made in negotiations on the social spending and climate bill but “more time is needed.”

She said the infrastructure legislation will pass once there is an agreement on the larger bill.

House Republicans are unlikely to help pass the infrastructure bill, eager to deny Biden a policy victory ahead of the midterms.

Even as they wrangle over Biden’s agenda, Democrats face the fast-approaching debt ceiling deadline.

Republicans want no part of the debt limit increase, saying it is Democrats’ problem since they control Congress and the White House. Democrats note that about $5 trillion of the nation’s debt is the result of tax cuts and spending passed during Republican Donald Trump’s presidency.

The House approved a bill late on Wednesday, September 29, suspending the debt limit through December 2022. The Senate could vote on it “as early as next week,” Senate Majority Leader Chuck Schumer said, but Republicans are expected to block it again as they have twice before. – Rappler.com