POLICE PRESENCE. Members of the Buffalo Police department work at the scene of a shooting at a Tops supermarket in Buffalo, New York, USA, on May 17, 2022.

Facebook Twitter Copy URL
Copied
Paytron Gendron invites people to a Discord chat room to see his plans, some 30 minutes before carrying out his attack in Buffalo, New York 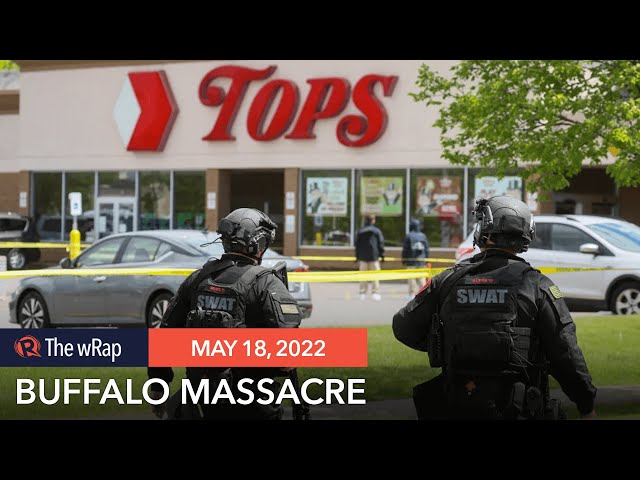 The 18-year-old man accused of the deadly mass shooting in Buffalo, New York, invited people to a Discord chat room to see his plans around 30 minutes before he carried out the attack, the New York Times reported on Tuesday, May 17, citing a statement from the messaging app.

The FBI said Payton Gendron, who is white, committed an act of “racially motivated violent extremism” when he opened fire with a semi-automatic rifle on Saturday at a grocery store in a predominantly African-American neighborhood of Buffalo.

Eleven of the 13 people struck by gunfire were Black. Ten of the victims were killed in the rampage, part of which the gunman live-streamed on a social media platform.

“What we know at this time is that a private, invite-only server was created by the suspect to serve as a personal diary chat log,” Discord told the New York Times.

It added: “Approximately 30 minutes prior to the attack, however, a small group of people were invited to and joined the server. Before that, our records indicate no other people saw the diary chat log in this private server.”

It was not clear who Gendron may have invited to the server. Discord did not immediately respond to a request for comment. – Rappler.com