LAKE HUGHES, CALIFORNIA - AUGUST 13: A firefighter works to put out a hotspot from the Lake Fire on August 13, 2020 in Lake Hughes, California. The fire, which quickly grew to 10,000 acres yesterday, was burning in the Lake Hughes area of Angeles National Forest prompting mandatory evacuations and destroying multiple structures. Mario Tama/Getty Images/AFP

Facebook Twitter Copy URL
Copied
Temperatures are expected to peak to 108 degrees Fahrenheit (42.2 Celsius) in the Los Angeles area on Sunday and to 118 Fahrenheit (47.8 Celsius) further inland in Woodland Hills

California is bracing for record-breaking temperatures and dangerous fire weather conditions this Labor Day weekend, with the National Weather Service urging people to limit outdoor activity and to stay hydrated.

“Saturday and Sunday will be about 20 to 30 degrees above normal across the entire area,” Frank Fisher, a NWS meteorologist for the southern part of the state, told AFP.

“By Monday, we should be 10 to 20 degrees above normal … but still very warm and dangerous outside,” he added.

Fisher said temperatures are expected to peak to 108 degrees Fahrenheit (42.2 Celsius) in the Los Angeles area on Sunday and to 118 Fahrenheit (47.8 Celsius) further inland in Woodland Hills. 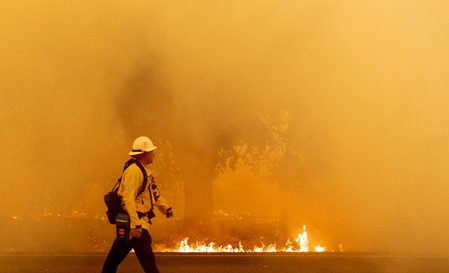 Excessive heat warnings through the holiday weekend and possibly beyond have also been issued in other western states including Arizona and Nevada.

The warm temperatures in California come as the state is recovering from another heat wave in mid-August and devastating wildfires that have burned some 1.5 million acres in the last three weeks.

That heat wave also set records, with Death Valley — located near the border with Nevada — recording a high of 130 degrees, one of the hottest temperatures ever measured on Earth with modern instruments.

Weather forecasters said red flag warnings indicating the potential for dangerous fire conditions had been issued in many parts of California for the weekend, notably in the Santa Barbara mountains, north of Los Angeles.

“We have the heat, winds and low humidity,” a perfect cocktail for fires, Fisher said.

“Our big issue with this excessive heat,” he added, “is the fact that it’s a holiday weekend and a lot of people are going out.”

He said the National Weather Service was recommending people refrain from outdoor activities such as hiking and remain indoors during the day.

Once the sun sets, however, evening temperatures are not expected to bring much relief.

“This is going to be the warmest nighttimes we are going to have in a while,” Fisher said. “We are looking for temperatures to be in the upper 70s and even upper 80s, the warmest being Saturday night.”

And if you’re expecting to go to a restaurant in the Los Angeles area or other regions, where only outdoor dining is allowed because of the COVID-19 pandemic, you may want to think twice.

“Outdoor dining is not going to work this weekend,” Fisher said.

The situation is not expected to be any better further north – in the Bay Area and beyond — where dangerous hot conditions are also predicted.

“It’s certainly gonna be hot all over,” said Jonathan Garner, a NWS meteorologist for that region.

“In areas like Ukiah, the record of 108 degrees could be exceeded by one or two degrees,” he told AFP, referring to a city about 115 miles (185 kilometers) north of San Francisco. – Rappler.com