A Pacific Gas and Electric firefighter walks down a road as flames approach in Fairfield, California during the LNU Lightning Complex fire on August 19, 2020. - Thousands of people fled their homes in northern California on August 19 as hundreds of fast-moving wildfires spread across the region, burning houses and leading to the death of a helicopter pilot. (Photo by JOSH EDELSON / AFP)

Some of California’s largest ever fires raged across the state Saturday, August 22, forcing tens of thousands from their homes as the governor called for international help to fight the blazes.

About 12,000 lightning strikes hit across the state in 72 hours, officials said, sparking the fires that left thick smoke blanketing large areas of central and northern California.

“We simply haven’t seen anything like this in many, many years,” California governor Gavin Newsom said on Friday, August 21.

Wineries in the famed Napa and Sonoma regions, which are still reeling from blazes in recent years, are under threat by the SCU Complex – the 10th largest fire recorded.

Five deaths have been linked to the latest flare-ups, with 4 bodies recovered on Thursday, including 3 from a burned house in a rural area of Napa County.

Nature reserves were also ravaged. The Big Basin Redwoods State Park said in a statement that some of its historic buildings had been destroyed by flames.

The park, where giant redwood trees of well over 500 years old can be found, was “extensively damaged” it said.

Scorching temperatures and bone-dry conditions had spurred the flames, Cal Fire’s assistant deputy director Daniel Berlant said, though some progress at containing the fires had been made.

About 119,000 people have been evacuated from the area, with many struggling to find shelter and hesitating to go to centers set up by authorities because of coronavirus risks.

Temperatures were expected to cool slightly at the weekend, he added, but there was potential for more ignitions as early as Sunday evening, August 23.

“We could again experience a lightning storm so that has us remaining on high alert,” Berlant said. 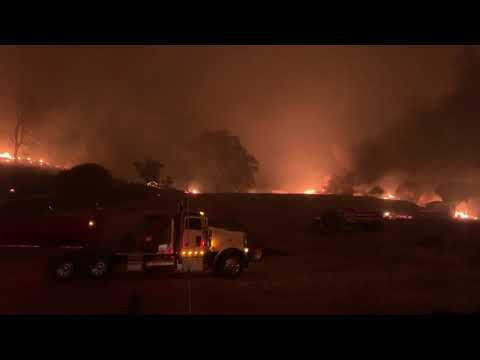 Some in counties south of San Francisco opted to sleep in trailers along the Pacific Ocean as they fled nearby fires, while tourists in Santa Cruz County were urged to leave to free up accommodation for those evacuating their houses.

Fire crews, surveillance equipment and other firefighting hardware was coming in from several states including Oregon, New Mexico and Texas, to fight the fires Governor Newsom told reporters Friday.

But faced with the sheer scope of the disaster, he also asked for help from Canada and Australia, which he said had “the world’s best firefighters”.

Most of the fires are burning in unpopulated areas and statewide have blazed through some 771,000 acres – an area the size of Rhode Island state – he said.

Newsom had taken aim at the US leader in a taped speech to the Democratic National Convention, saying Trump had threatened to pull California’s funding for wildfire suppression for alleged poor forest management.

“There is not one phone call I have made to the president where he hasn’t quickly responded, and almost in every instance has responded favorably … as it related to these wildfires,” he said Friday.

“He may make statements publicly, but the working relationship privately has been a very effective one.”

In San Francisco, the smell of smoke lingered for the third consecutive day on Friday, with authorities urging residents to stay indoors.

“The many fire complexes burning around the Bay Area and Central Coast will keep skies hazy and smoky, at least in the short term,” the National Weather Service said.

Authorities in the Bay Area, which encompasses 7 counties, issued an air quality alert in effect through Sunday. – Rappler.com