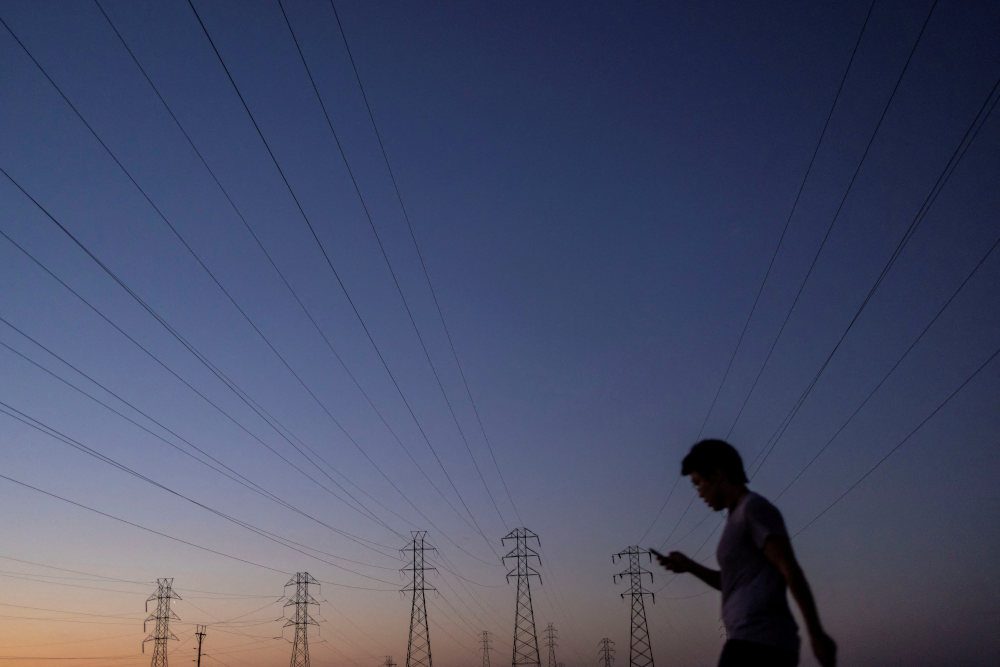 HEAT WAVE. A man walks by power lines, as California's grid operator urged the state's 40 million people to ratchet down the use of electricity in homes and businesses as a wave of extreme heat settled over much of the state, in Mountain View, California, USA, on August 17, 2022.

Facebook Twitter Copy URL
Copied
Temperatures are expected to top 108 degrees Fahrenheit in Sacramento, the state capital, and other inland valleys, and break 100 degrees around the Los Angeles area

SACRAMENTO, USA – A man in a heat-stricken suburb of Los Angeles and a woman with two young kids in Pomona were among the Californians desperately seeking cool shelter as extreme temperatures baked the state on Wednesday, September 7, for an eighth straight day.

Temperatures were expected to top 108 degrees Fahrenheit (42 degrees Celsius) in Sacramento, the state capital, and other inland valleys, and broke 100 degrees around the Los Angeles area.

The agency that operates most of California’s electrical grid urged consumers to conserve energy during the late afternoon and evening hours to avoid rolling blackouts, as the heat wave blanketed the drought-stricken region and crews fought multiple wildfires linked to the dry conditions.

Many people without air conditioning or homes found some relief in cooling centers operated out of city hall conference rooms and community centers.

But untold numbers of homeless people lay on the streets in downtown Los Angeles, seeking whatever patches of shade they could find, said Andy Bales, president and CEO of the Union Rescue Mission, which helps people experiencing homelessness.

Bales said he and his staff were walking the streets twice a day to hand out water bottles. Some people barely moved, he said, opening their eyes only to look at the volunteers and grasp a cool bottle.

About 1,000 people were sheltering at the Union Rescue Mission’s three facilities in the area, he said.

The organization also found cool places to stay for others, including two mothers with children and a man who called from suburban Simi Valley, where the temperature hit 100 degrees Fahrenheit on Wednesday.

In Sacramento, hard-hit by the prolonged heat wave that started in Southern California and moved north over the Labor Day weekend, a high school football player collapsed. A local chain of fitness centers canceled classes, saying its air-conditioning system could not keep up.

Temperatures are forecast to remain extreme in coming days before residents get some relief during the weekend, according to the National Weather Service.

Evacuation orders remained in place in Riverside County east of Los Angeles and in Siskiyou County in the northernmost part of the state, abutting Oregon, as crews responded to deadly wildfires.

As of Wednesday morning, just 5% of the Fairview Fire in Riverside was contained after scorching 7,000 acres (2,830 hectares), according to the Riverside County Fire Department. The fire has claimed the lives of two people and injured another.

On Tuesday, power prices soared to a two-year high and demand hit an all-time record as homes and businesses cranked up air conditioners.

The California Independent System Operator (ISO), grid operator for most of the state, canceled its warning for possible rotating outages late Tuesday with no outages needed.

While urging consumers and businesses to keep conserving, the grid operator has been primarily concerned with the late afternoon and evening hours, when the sun sets and solar power is no longer available.

The last time the ISO ordered utilities to shed power was for two days in August 2020 when outages affecting about 800,000 homes and businesses lasted anywhere from 15 minutes to about 2-1/2 hours. – Rappler.com