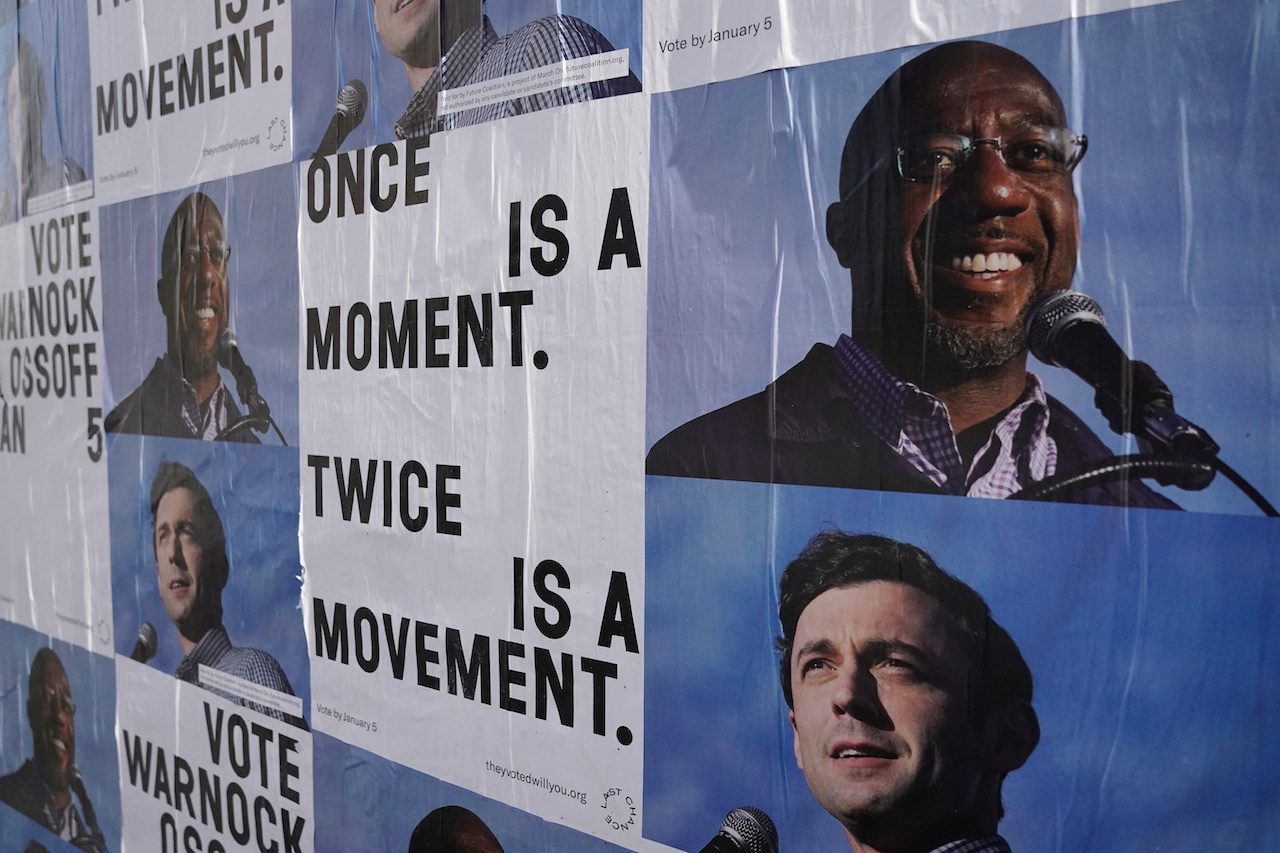 MOVEMENT. Campaign ads for Jon Ossoff and Raphael Warnock are seen on a wall near the John Lewis mural the day after the US Senate runoff elections in Atlanta, Georgia, January 6, 2021.

Democrats took control of the US Senate on Wednesday, January 20, when Vice President Kamala Harris swore in 3 new members to give the party a narrow grip on both houses of Congress as well as the White House for the first time in a decade.

Democrats Raphael Warnock and Jon Ossoff of Georgia and Alex Padilla of California took the oath of office in the Senate chamber hours after President Joe Biden was sworn in.

Warnock and Ossoff won upset victories in a pair of January 5 runoff elections to split the Senate 50-50 with Harris, a Democrat, holding the decisive vote in any tie between Republicans and Democrats.

Padilla, California’s first Latino senator, was appointed to fill Harris’s Senate seat after she resigned on Monday to take the oath of office as vice president on Wednesday.

The 3 Democrats give Biden a narrow advantage to pursue policies that include a fresh wave of relief for a nation hammered by the coronavirus pandemic in the face of deep political divisions. Schumer and McConnell are in talks about a possible power-sharing deal governing daily Senate operations, similar to one struck two decades ago. Both men favor making such an agreement, but McConnell has asked to keep the rules requiring a supermajority of 60 votes to advance most legislation.

In past years, at least some national security nominees have been confirmed on Inauguration Day, but none appeared to be ready for a Senate floor vote on Wednesday. The first committee hearings on 5 of Biden’s Cabinet nominees were only held the day before.

The new Senate is also poised to hold former President Donald Trump’s second impeachment trial on a charge of inciting insurrection passed by the House last week after his supporters stormed the Capitol.

Democrats also hold a 221-211 majority in the House of Representatives.

Warnock, a 51-year-old Baptist preacher who never before held political office, is the first Black senator to represent Georgia. He held the pulpit in Atlanta where slain civil rights leader Martin Luther King Jr once preached.

The first Jewish senator from Georgia, Ossoff was sworn in on a book of Hebrew scripture that belonged to Atlanta Rabbi Jacob Rothschild, a close ally of King.

“I’m really looking forward to getting down to work and delivering the kind of investment in public health and vaccine distribution and the direct economic relief that people send us here to fight for,” Ossoff told reporters in the Capitol earlier Wednesday.

Padilla, 47, has been California’s secretary of state since 2015. Previously he served in the state Senate and spent over 7 years on the Los Angeles City Council, 5 of them as council president. – Rappler.com