An emotional US President Joe Biden, who has come away from his visit with papal backing in his conflict with conservative US bishops, on Sunday, October 31, praised Pope Francis for being “everything I learned about Catholicism.”

Biden, the second Catholic president in US history, choked up as he spoke about his late son Beau and his own feelings about the Pope and Catholicism at a final news conference in Rome at the end of the G20 summit of leaders of the world’s richest nations.

“This is a man who has great empathy. A man who understands that part of his Christianity is to reach out,” Biden said. “He is a really, truly genuine decent man.”

Conservative US bishops want to deny Biden the right to receive communion, the central sacrament of the faith, because of Biden’s support for abortion rights. The same bishops, some of whom supported Biden’s predecessor Donald Trump, have clashed with the Pope on issues including climate change, the death penalty and nuclear weapons.

Biden has said he personally opposes abortion but, as an elected official, cannot impose his views on others.

“He is everything I learned about Catholicism from the time I was a kid going from grade school through high school,” Biden said.

In an apparent reference to the Pope’s critics, Biden said “I have great respect for people who have other religious views but he’s just a fine, decent, honorable man, and we keep in touch.” After he met the Pope on Friday, Biden said the pontiff had told him he is a “good Catholic” who can receive the sacrament.

Biden did just that when he went to Mass the next evening at St. Patrick’s, the English-language church of the American Catholic community in Rome.

Biden spoke in response to a reporter who asked how he felt about the Pope’s backing and whether it meant the communion debate should be put to rest.

He answered by heaping praise on Pope Francis as someone “looking to establish peace and decency and honor, not just in the Catholic church but just generically.”

Biden choked up as he recalled how when Francis visited the United States in 2015, while Biden was vice president, the pontiff took time to console the extended Biden family over the death of Biden’s son Beau earlier that year at the age of 46. 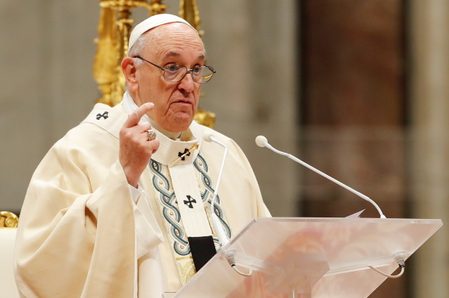 “He didn’t just generically talk about it (Beau’s death from brain cancer), he knew about it. He knew what he did, he knew who he was, he knew where he went to school, he knew what a man he was,” Biden said.

“It had such a cathartic impact on his (Beau’s) children, and my wife, our family, it meant a great deal,” Biden said. – Rappler.com