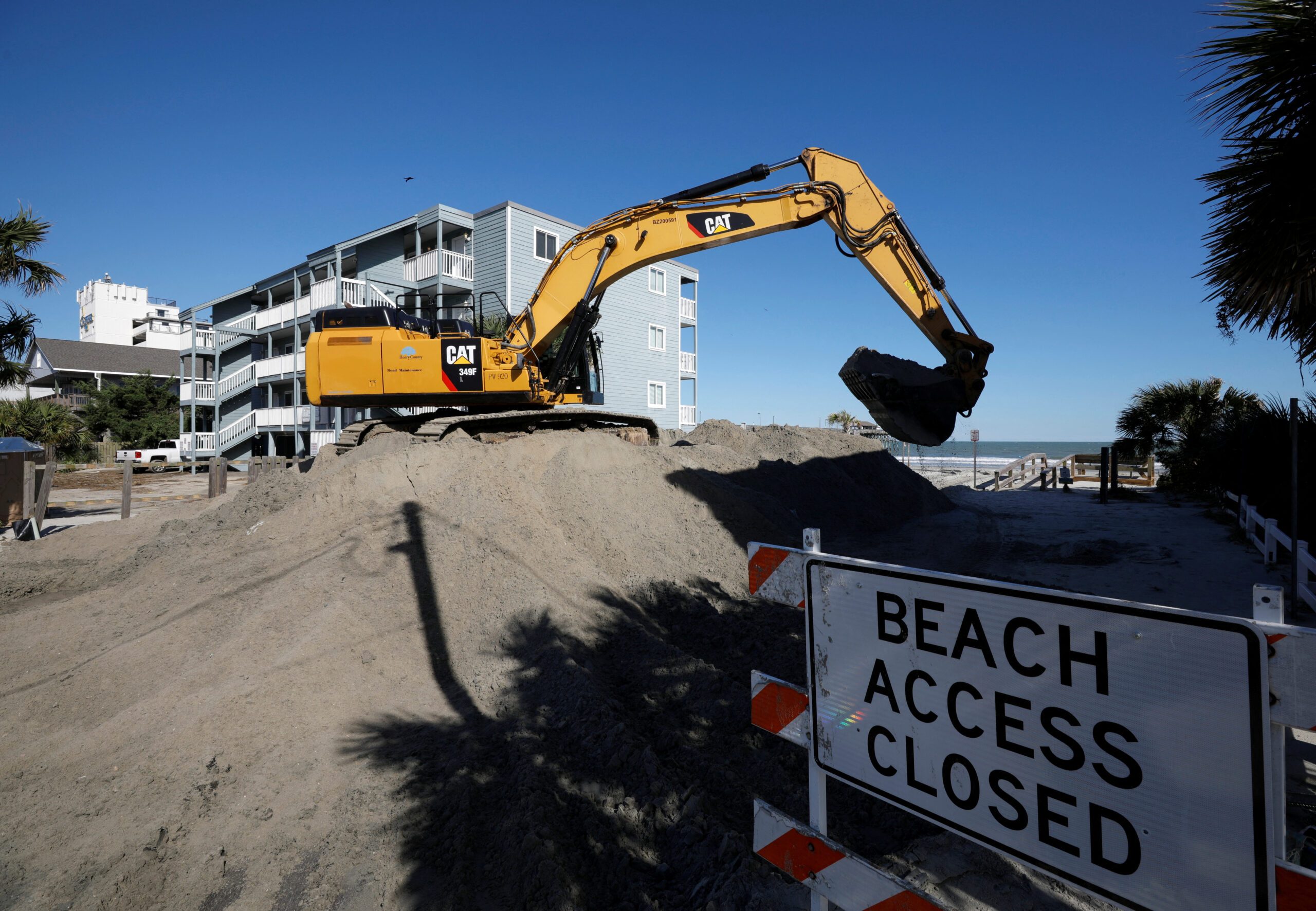 CLEANUP. Heavy machinery gathers sand swept inland by hurricane Ian into a large pile before it is returned to the beach in Garden City, South Carolina.

Facebook Twitter Copy URL
Copied
The number of confirmed fatalities from Ian rises to at least 50, most in Lee County, Florida

Florida and the Carolinas, staggered by one of the fiercest storms in U.S. history, faced a massive recovery on Saturday, October 1, as remnants of Hurricane Ian threatened further flooding along the Eastern Seaboard while leaving tens of billions of dollars in damage in its wake.

The number of confirmed fatalities from Ian rose to at least 50, most in Lee County, Florida, which bore the brunt of the storm when it slammed ashore on the state’s Gulf Coast on Wednesday as a Category 4 hurricane packing maximum sustained winds of 150 miles (240 km) per hour.

The death toll was expected to climb as floodwaters receded and search teams reached more areas initially cut off by the storm.

As of Friday, some 10,000 people were reported unaccounted for in Florida, according to the state’s emergency management director, who added that many of those were likely safe in shelters or otherwise unreachable because of power and phone outages.

As the full extent of devastation came into clearer focus three days after Ian made U.S. landfall, officials said some of the heaviest damage appeared to have been inflicted by raging wind-driven ocean surf that rushed into seaside communities and washed buildings away.

New satellite images from the National Oceanic and Atmospheric Administration (NOAA) showed beach cottages and a motel building that lined the shores of Florida’s Sanibel Island had been demolished by Ian’s storm surge. Although most homes appeared to still be standing, roof damage to all was evident.

Surveys from the ground showed that the barrier island, a popular tourist getaway that was home to some 6,000 residents, was left utterly ravaged, from its infrastructure to its famously idyllic aesthetic character.

“It’s all just completely gone,” Sanibel’s city manager, Dana Souza, said. “Our electric system is pretty much destroyed, our sewer system has been damaged badly and our public water supply is under assessment.”

The island’s link to the mainland was severed by breaches to Sanibel’s causeway bridge, further complicating recovery efforts, Souza said.

After waning to a tropical storm by the end of its march across Florida to the Atlantic, Ian regained hurricane strength and pummeled coastal South Carolina on Friday, sweeping ashore near Georgetown, north of the historic port city of Charleston, with sustained winds reaching 85 mph (140 kph).

Numerous roads were flooded and blocked by fallen trees while a number of piers were damaged in that area.

Weakening again as it churned north and inland, Ian had been downgraded to a post-tropical cyclone by Saturday afternoon. But remnants of the storm were still expected to bring treacherous conditions to parts of the central Appalachians and mid-Atlantic, according to the National Hurricane Center.

Flood watches were posted for southwestern Virginia and southern West Virginia on Saturday, even as major to record flooding was forecast to continue in central Florida.

About 1.2 million homes and businesses were without power in Florida as of 1 p.m. EDT (1700 GMT) on Saturday, with some 300,000 outages scattered across the Carolinas and Virginia.

Florida accounted for the overwhelming majority of confirmed storm-related deaths, with 35 tallied by the Lee County sheriff’s office and 11 others reported by state officials in four neighboring counties.

North Carolina authorities said at least four more people had perished there. No deaths were reported in South Carolina.

Damage from high water, unleashed by storm surge along the coast and torrential rains further inland, was extensive.

“We suffered more flood damage than wind damage,” Florida Governor Ron DeSantis said Saturday. “That is going to require a lot of flood claims being filed.”

Insurers braced for between $28 billion and $47 billion in claims from what could amount to the costliest Florida storm since Hurricane Andrew in 1992, according to U.S. property data and analytics company CoreLogic.

President Joe Biden has approved a disaster declaration for Florida, saying Ian was “likely to rank among the worst (storms) … in the nation’s history.” On Saturday, he declared an emergency in North Carolina.

On Sanibel, crews were just making their way to the hard-hit east end of that island on Saturday, “so our situation is that we’re still in the search-and-rescue mode,” the city manager, Souza said.

City officials were aware of nearly 300 households of people who failed to leave the island as the storm approached and whose whereabouts and well-being were now being checked, he said.

Ricky Anderson, 57, a cashier who moved recently from Illinois to the nearby Fort Myers area, said he “lost everything in the hurricane,” as did many of his neighbors.

“Where are all those people supposed to go that have no home anymore?” Anderson said.

Robert Hartman, 81, a 50-year-resident of Fort Myers, said government help was crucial to get residents back on their feet.

“We have no power, no phone service, nothing. We would just like a little help to get my home back in shape because I have nowhere to go,” he added. – Rappler.com