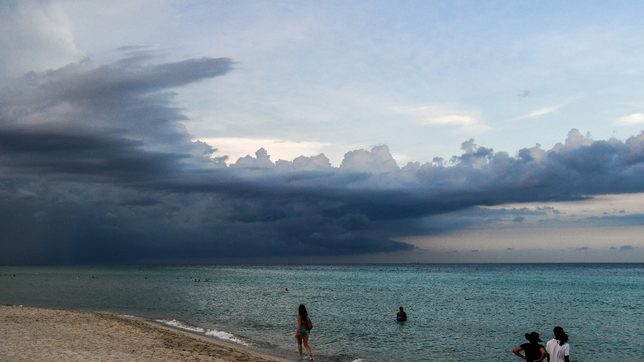 (FILES) In this file photo dark clouds cover the ocean as people enjoy the water in Miami Beach, Florida on July 14, 2020, amid the coronavirus pandemic. - Florida recorded 216 coronavirus deaths on July 29, 2020, setting another record as one of the pandemic hot spots in the US. The new toll shattered a record set just on July 28, 2020 with 186 fatalities, and the overall death toll from the pandemic in Florida is now 6,333, the state health department said. The number of new cases of COVID-19 reported July 29, 2020 was 9,446, down slightly from the daily total of around 10,000 that has been the norm for weeks. (Photo by CHANDAN KHANNA / AFP)

Facebook Twitter Copy URL
Copied
Tropical Storm Isaias is expected to hit the southern US state by the end of the week, according to the National Hurricane Center

Florida will close its coronavirus testing centers on Thursday, July 30, a day after the state reported a record 216 deaths from the disease, as authorities batten down for a looming storm.

Tropical Storm Isaias is expected to hit the southern state by the end of the week, according to the National Hurricane Center, and is already packing winds of 50 miles (80 kilometers) per hour.

Authorities said they would respond by closing all COVID-19 test sites – already hamstrung by delays – from 5 pm (2200 GMT) Thursday until further notice.

“All sites have free standing structures including tents and other equipment, which cannot withstand tropical storm force winds, and could cause damage to people and property if not secured,” state emergency management officials said in a statement.

Florida has emerged as a major new epicenter of the US coronavirus battle. Its number of confirmed cases recently surpassed New York and is now second only to California, a state with twice as many people.

More than 450,000 people have been infected with the virus in the Sunshine State, which has a population of 21 million, while more than 6,300 have died.

A quarter of all of Florida’s cases are in Miami.

The approval rating of Florida’s Republican Governor Ron DeSantis has plunged over the past month over his handling of the crisis.

Back in May he bragged that he had managed to control the pandemic while accusing the media of spreading panic over the outbreak.

DeSantis, a close ally of President Donald Trump, has refused to make mask-wearing obligatory statewide, although some Florida mayors have imposed such policies.

Florida’s economy is heavily dependant on tourism and officials had scrambled to lure visitors back to the state in May and June, when it seemed that the pandemic was under control.

Hospitals are now running short of beds, intensive care units are packed, and the state’s jobless rate is climbing.

More than 150,000 people have died of the virus across the United States, according to the Johns Hopkins University tracker. – Rappler.com