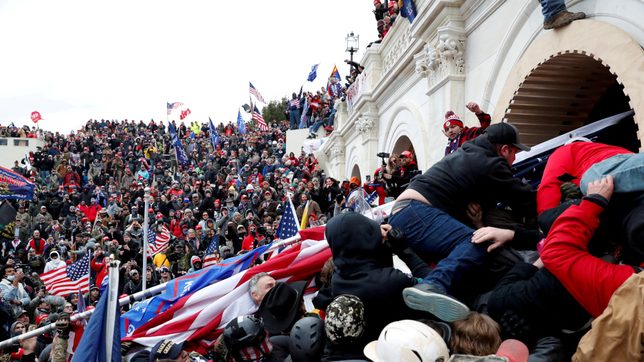 Facebook Twitter Copy URL
Copied
Lawmakers say they have dozens of text messages between Sean Hannity, Mark Meadows and others 'related to the 2020 election and President Trump's efforts to contest the outcome of the vote'

The US House of Representatives panel probing the deadly attack on the US Capitol in January 2021 wants to question Fox News host Sean Hannity about his text messages with former President Donald Trump, his aides, and lawyers from that time.

Representative Bennie Thompson, the committee’s chairman, and Liz Cheney, its vice chair, on Tuesday, January 4, sent a letter requesting Hannity voluntarily answer questions about matters including his communications with Trump, Trump’s chief of staff Mark Meadows and others in the days surrounding the January 6, 2021 attack.

The letter added that Hannity’s communications suggested he “had knowledge of concerns by President Trump’s White House Counsel’s Office regarding the legality of the former President’s plans for January 6th.”

Hannity did not immediately respond to a request for comment.

The lawmakers said they have dozens of text messages between Hannity, Meadows and others “related to the 2020 election and President Trump’s efforts to contest the outcome of the vote.”

“At this time, we are specifically focused on a series of your communications with President Trump, White House staff and President Trump’s legal team between December 31, 2020, and January 20, 2021,” Cheney and Thompson wrote to Hannity.

The lawmakers said Hannity’s communications were not subject to any kind of privilege and were related to the issues being probed by the committee.

More than 100 police officers were injured during the multi-hour onslaught at the Capitol on January 6 by Trump supporters who were seeking to overturn his defeat in the presidential election, which Trump falsely claimed was a result of widespread fraud. One officer who battled rioters died the day after the attack and four who guarded the Capitol later died by suicide. Four rioters also died. More than 700 people have been arrested in connection with the Capitol assault. – Rappler.com