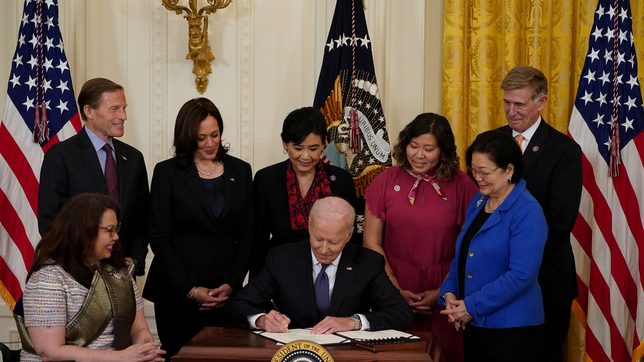 'SILENCE IS COMPLICITY.' US President Joe Biden signs the COVID-19 Hate Crimes Act into law during a ceremony in the East Room at the White House in Washington, US, May 20, 2021.

Facebook Twitter Copy URL
Copied
'We have to speak out. We have to act,' says US President Joe Biden

President Joe Biden on Thursday, May 20, signed into law the COVID-19 Hate Crimes Act that overwhelmingly passed Congress in a rare show of bipartisanship following a spate of high-profile attacks on Asian Americans in the wake of the coronavirus pandemic.

“Silence is complicity and we cannot be complicit. We have to speak out. We have to act,” Biden told lawmakers. “That’s what you’ve done. And I can’t thank you enough. I’m proud today.”

The legislation passed the Senate by a vote of 94-1 in April and the House of Representatives by 364-62 earlier this month. Both chambers are narrowly controlled by Democrats.

Reports of violence against Asian Americans have spiked since the start of the pandemic last year. Activists and police said anti-Asian sentiment was fed by comments from former President Donald Trump blaming the pandemic on China, using terms such as “kung flu.” The bill, sponsored by Democratic Senator Mazie Hirono and Democratic Representative Grace Meng, designates a justice department employee to expedite a review of hate crimes reported to police during the COVID-19 pandemic. Vice President Kamala Harris, the first woman, the first African American, and the first person of Asian descent to hold the office, opened the ceremony by thanking lawmakers, many of whom were present, for their work.

“To the members of our United States Congress on both sides of the aisle who helped pass the COVID-19 Hate Crimes Act, thank you,” she said. “Because of you, history will remember this day and this moment when our nation took action to combat hate.” – Rappler.com