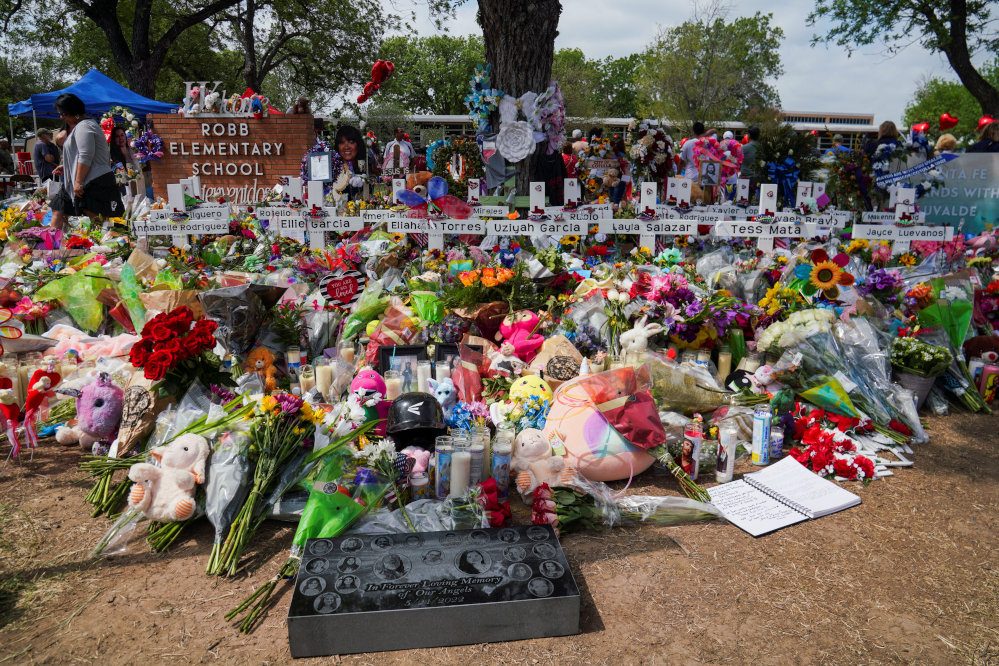 MEMORIAL. Flowers, toys, and other objects to remember the victims of the deadliest US school mass shooting in nearly a decade, resulting in the death of 19 children and two teachers, are pictured at the Robb Elementary School in Uvalde, Texas, USA on May 30, 2022.

Facebook Twitter Copy URL
Copied
'The idea of these high-caliber weapons – there is simply no rational basis for it in terms of self-protection, hunting,' US President Joe Biden says

A day after promising residents of Uvalde, Texas, action to address gun violence, US President Joe Biden on Monday, May 30, sought to appeal to “rational” Republicans to curb high-caliber weapons and take other steps to prevent more mass shootings.

“Things have gotten so bad that everybody is getting more rational about it,” Biden, a Democrat, told reporters as he returned from his weekend trip to memorialize the 19 children and two teachers killed last week in the nation’s worst mass school shooting in a decade.

“The idea of these high-caliber weapons – there is simply no rational basis for it in terms of self-protection, hunting,” Biden said.

The United States has seen hundreds of lives claimed by dozens of mass shootings in recent years and similar rounds of talks in Washington about how to reduce them have not resulted in action by Congress. The two parties remain deeply divided, with Biden’s Democrats open to new restrictions on gun purchases while Republicans zealously guard an expansive vision of gun rights.

Questions remain nearly a week after an 18-year-old shot his grandmother before heading to Robb Elementary School in southern Texas armed with an AR-15 semi-automatic rifle, killing 21 people and injuring at least 17 others.

Local police waited nearly an hour even as children continued calling 911 pleading for help before a US Border Patrol tactical team stormed in and killed the shooter.

The US Department of Justice on Sunday said it would review law enforcement’s response at the behest of Uvalde’s mayor. Some Texas Democrats also want a separate FBI probe.

Residents of the shattered town urged Biden to “do something” as he visited on Sunday and attended a memorial at the school before meeting with families and first responders.

But little has changed since 1999 when two student gunmen killed 13 people at Columbine High School in Colorado. Since then, mass school shootings have rocked Virginia Tech University, Sandy Hook Elementary school in Connecticut and Marjory Stoneman Douglas High School in Florida, among others.

Biden has backed multiple actions, including a renewal of the assault weapons ban imposed in the 1990s and universal background checks. But the president, whose fellow Democrats only narrowly control Congress, has pointed to the limited power of executive action and urged lawmakers to act.

Talks led by Democratic Senator Chris Murphy of Connecticut and Republican Senator John Cornyn of Texas are expected to continue this week. But Congress is on recess until June 6, raising the risk that momentum in these latest talks peters out.

Some states, including those like Florida and Connecticut that have faced a mass shooting, have separately sought to tackle some gun law changes. – Rappler.com