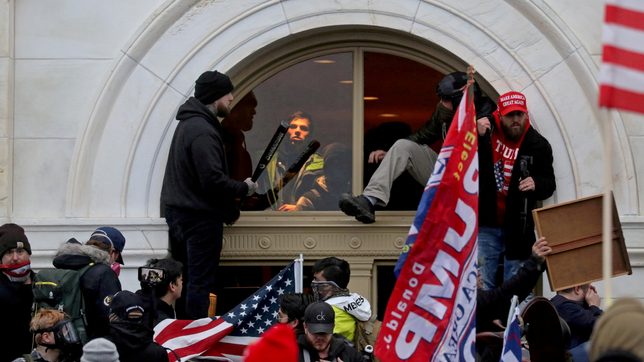 US CAPITOL ATTACK. A mob of supporters of then-US President Donald Trump climb through a window they broke as they storm the Capitol Building in Washington, USA on January 6, 2021.

A US judge rejected a request by former President Donald Trump for an immediate ruling on whether a congressional committee investigating the deadly January 6 attack on the US Capitol can access some of his White House records.

US District Judge Tanya Chutkan in the District of Columbia did not rule on the merits of an argument by Trump’s lawyers that telephone records, visitor logs and other White House documents should be kept from the committee.

Trump argues that the materials requested by the House of Representatives committee are covered by a legal doctrine known as executive privilege that protects the confidentiality of some White House communications.

He is requesting an injunction blocking the National Archives, a federal agency that holds his White House records, from complying with the committee’s document requests.

The committee has said it needs the requested materials to understand the role Trump may have played in fomenting the riot.

Trump gave an incendiary speech before the assault on the Capitol, repeating his false claims that the November 2020 election was stolen from him through widespread voting fraud and urging his supporters to go to the Capitol and “fight like hell” to “stop the steal.”

His supporters stormed the Capitol in a failed bid to prevent Congress from certifying now-President Joe Biden’s election victory. Biden, a Democrat, took office on Jan. 20.

About 700 people face criminal charges stemming from the riot.  – Rappler.com