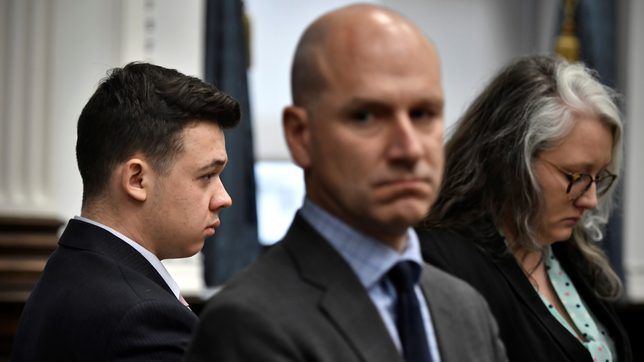 KYLE RITTENHOUSE. Kyle Rittenhouse, stands with his attorneys, Corey Chirafisi, and Natalie Wisco, as the jury leaves to deliberate during his trial at the Kenosha County Courthouse in Kenosha, Wisconsin, U.S., November 16, 2021.

Facebook Twitter Copy URL
Copied
After roughly eight hours of deliberations, Kenosha County Judge Bruce Schroeder says he would accept the jury's request to call it a day and come back at 9 am Central Time on Wednesday

The jury in the Wisconsin murder trial of Kyle Rittenhouse ended their first day of deliberations on Tuesday, November 16, without reaching a verdict, pushing their efforts to form a consensus on the teenager’s guilt or innocence into a second day.

Rittenhouse, 18, is charged with killing Joseph Rosenbaum, 36, and Anthony Huber, 26, and wounding Gaige Grosskreutz, 28, on August 25, 2020. The shootings took place in Kenosha during protests – marred by arson, rioting and looting – that followed the police shooting of a Black man, Jacob Blake, who was left paralyzed from the waist down.

After roughly eight hours of deliberations, Kenosha County Judge Bruce Schroeder said he would accept the jury’s request to call it a day and come back at 9 am Central Time (1500 GMT) on Wednesday.

“I understand that you wish to break for the evening,” Schroeder said. “You are in charge at this particular point.”

The jury of 7 women and 5 men sent two notes to the judge on Tuesday, neither giving any indication of the substance of their discussions. The first note asked for extra copies of the first six pages of the judge’s 36-page jury instructions and the second requested copies of the final 30 pages.

The high-profile case pits the prosecution’s argument that Rittenhouse shot the men without justification, against the teenager’s assertion that he acted in self-defense. Rittenhouse faces life in prison on the most serious count.

At the start of Tuesday, Rittenhouse played an indirect role in whittling down the jury, which was composed of 18 members through two weeks of testimony, to 12 for deliberations. He selected six pieces of paper out of a metal raffle tumbler, each with the number of a juror who was then designated an alternate.

Rittenhouse has pleaded not guilty and took the stand last week to argue that he only fired his weapon after the men attacked him. He said Rosenbaum, the first person he shot that night, grabbed the barrel of his semi-automatic rifle.

Prosecutors described Rittenhouse as a reckless vigilante who provoked the series of violent encounters, first by raising his rifle in a threatening way, then by shooting Rosenbaum which created an “active shooter” situation which others tried to stop.

The defense said Rittenhouse, who carried a medical kit in addition to his gun, merely wanted to help the injured and protect a used-car dealership from the kind of property damage that Kenosha had seen over two nights prior to the shooting.

The shootings have emerged as the most closely watched case involving a civilian’s right to self-defense since George Zimmerman was acquitted in the fatal shooting of Trayvon Martin, an unarmed Black teenager, in 2013.

Like Zimmerman, Rittenhouse has become a polarizing figure, viewed as heroic by some conservatives who favor expansive gun rights and as a symbol of a reckless American gun culture by many on the left.

Kenosha has been on edge during the trial, although so far there has been only a small number of protesters outside the courthouse.

On Tuesday, the Kenosha County Sheriff’s Department issued a press release acknowledging “the anxiety surrounding the Kyle Rittenhouse trial” but saying that it currently saw no need to enact a curfew or close off roads. – Rappler.com