US teen Rittenhouse ‘provoked everything’ in deadly shootings – prosecutor 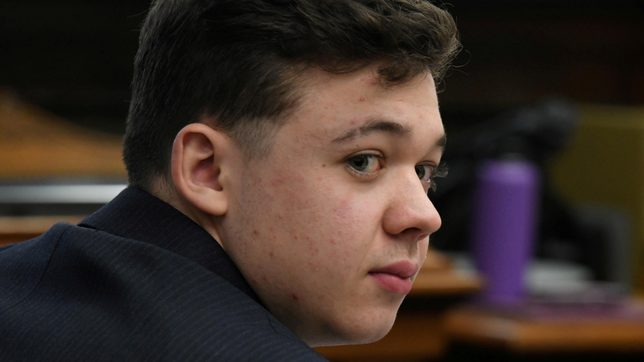 The prosecution and the defense at the murder trial of Kyle Rittenhouse on Monday, November 15, painted vastly different pictures of what caused the teenager to shoot three men during protests in Wisconsin last year, with prosecutors using grainy video to argue that Rittenhouse provoked the incidents.

In kicking off closing arguments, Kenosha County Assistant District Attorney Thomas Binger told the jury to ignore Rittenhouse’s argument that he was attacked and fired his semi-automatic AR-15-style rifle in self-defense, killing two men and wounding a third.

Instead, Binger argued, Rittenhouse instigated the first shooting by pointing his weapon at people, and caused the subsequent encounters by creating an “active shooter” situation in which protesters felt an urgency to disarm him.

“If you created the danger, you forfeit the right to self-defense by bringing that gun, aiming it at people, threatening people’s lives,” said Binger, who aimed the gun in front of the jury to demonstrate. “The defendant provoked everything.”

By arguing that Rittenhouse was the aggressor, Binger is attempting to raise the bar for the teen’s self-defense claim. Under Wisconsin law, a person who has provoked a confrontation must exhaust all other options before resorting to deadly force.

After Binger spoke for two hours, the defense began its final address to the jury by calling the prosecution desperate for its apparent shift in strategy, noting that establishing provocation had not been a focus of prosecutors during two weeks of testimony – much of which was supportive of the teenager’s argument that he was attacked before opening fire.

“When his case explodes in his face, now he comes out with provocation,” Mark Richards, Rittenhouse’s lawyer, said of Binger’s strategy. “Provocation, I don’t think so.”

The trial is the most closely watched case involving a civilian’s right to self-defense since George Zimmerman was acquitted in the fatal shooting of Trayvon Martin, an unarmed Black teenager, in 2013.

Like Zimmerman, Rittenhouse has emerged as a polarizing figure, viewed as heroic by some conservatives who favor expansive gun rights and as a symbol of an out-of-control American gun culture by many on the left.

“Mr. Rosenbaum was shot because he was chasing my client and going to kill him – take his gun and carry out the threats he made,” Richards said.

But Binger, showing a grainy drone video, argued that Rosenbaum, after seeing Rittenhouse point his rifle at people, had charged after the teenager in an attempt to “try and stop the defendant from pointing his gun or shooting anyone.”

Rittenhouse, 18, is charged with killing Rosenbaum, 36, and Anthony Huber, 26, and wounding Gaige Grosskreutz, 28, on August 25, 2020. The shootings took place in Kenosha, Wisconsin, during protests – marred by arson, rioting and looting – that followed the police shooting of a Black man, Jacob Blake, who was left paralyzed from the waist down.

Rittenhouse, who has pleaded not guilty and testified last week that he acted in self-defense and did not want to kill anyone that night, faces life in prison if convicted. He was 17 at the time of the shootings.

After the defense presents its closing arguments, the jury will begin deliberations and attempt to form a consensus on guilt or innocence.

For the prosecution, Binger said Rittenhouse had gone out of his way to travel to Kenosha from Antioch, Illinois, during the protests, one of a series of demonstrations in 2020 against racism and police use of force.

In an effort to argue that Rittenhouse acted recklessly, Binger talked at length about the powerful nature of an AR-15 and the ammunition it was loaded with: full metal jacket bullets designed to penetrate their target.

He called Rittenhouse a “fraud” for saying he was there as a medic to provide first aid, noting that he lied to a journalist about being a certified EMT. “This AR-15 is completely incompatible with the role of a medic,” Binger said

The jury was shown graphic video of Rosenbaum after he was shot four times, lying motionless and struggling to breathe.

Binger also displayed a close-up graphic photograph of Grosskreutz with a large chunk of his right arm shot off. Several jurors appeared to wince and turn away.

The prosecutor added that Huber, a protester who was shot after striking Rittenhouse with his skateboard, was trying to disarm the teenager.

Countering Binger’s portrayal of the protesters as heroic, Richards called Huber a “rioter” and said the crowd wanted to “get their licks in” on a teenager he said was on the side of the people trying to stop them from “wreaking havoc” in Kenosha.

Richards noted that Rosenbaum was on medication, had just been discharged from a hospital and had been caught on videos cursing at people and setting fires. Rosenbaum’s fiancée testified that he had bipolar disorder.

“We don’t play fast and loose with the facts pretending that Mr. Rosenbaum was Citizen A, No. 1 guy,” Richards said. “He was a bad man, he was there, he was causing trouble. He was a rioter and my client had to deal with him that night, alone.”

Earlier on Monday, Judge Bruce Schroeder dismissed a misdemeanor charge against Rittenhouse for illegally possessing the AR-15-style rifle he used in the shootings, citing vagueness in the law. – Rappler.com