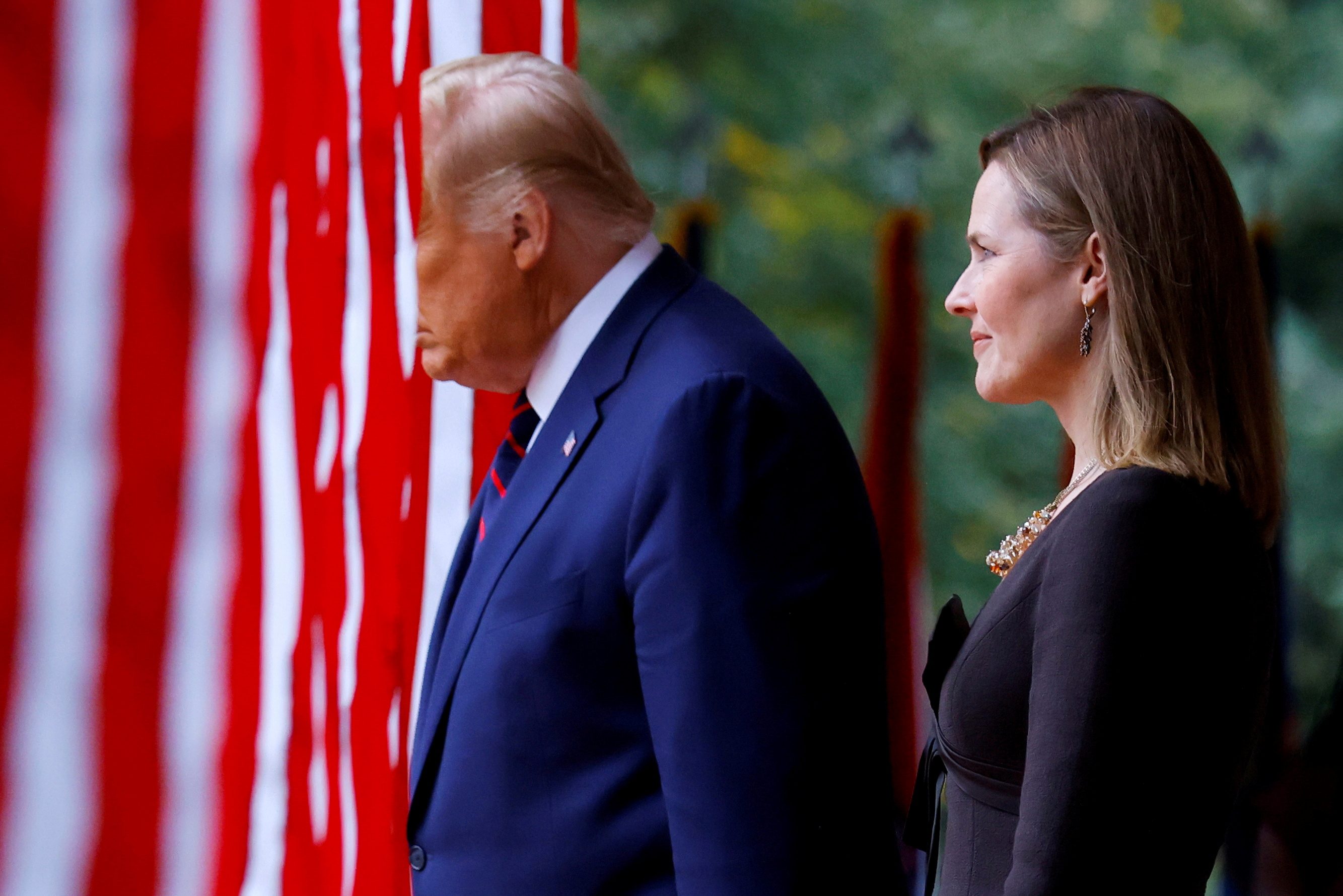 A LASTING MARK. US President Donald Trump arrives to hold an event to announce his nominee of US Court of Appeals for the Seventh Circuit Judge Amy Coney Barrett to fill the Supreme Court seat left vacant by the death of Justice Ruth Bader Ginsburg, who died on September 18.

When a US appeals court declared that Florida could make it harder for convicted felons to vote – a ruling decried by civil rights activists – the impact of President Donald Trump’s conservative judicial appointments was plain to see.

The Atlanta-based 11th US Circuit Court of Appeals was divided 6-4 in the September ruling, with 5 Trump appointees in the majority. They ruled that the Republican-governed state could require felons to pay fines, restitution, and legal fees after serving time and before casting ballots. A lower court had ruled the law violated their voting rights under the US Constitution.

The dissenting 11th Circuit judges were all Democratic appointees.

The outcome illustrated that Trump’s success in moving the US judiciary to the right was not limited to the Republican president’s 3 Supreme Court appointments – Amy Coney Barrett, Brett Kavanaugh, and Neil Gorsuch – who pushed the top US judicial body’s conservative majority to 6-3.

Nowhere is that more clearly on display than on the 13 influential federal courts of appeals, one rung below the Supreme Court. Trump, due to leave office next Wednesday, has appointed 54 judges to these courts in his 4 years as president, just one fewer than his Democratic predecessor Barack Obama did in 8 years. Trump’s total amounts to almost a third of the 179 federal appellate judges.

Trump also appointed 174 federal district court judges, a step below the appeals courts. Only Democratic President Jimmy Carter, who served from 1977 to 1981, appointed more judges overall during a single four-year term, according to Russell Wheeler, a Brookings Institution scholar who tracks judicial nominations.

Earlier in his presidency, Trump often touted judicial appointments as one of his greatest achievements in office. But after losing the November 3 presidential election, he turned on judges, including Supreme Court justices, who repeatedly rejected his efforts to overturn the result as he pushed false claims of widespread voting fraud and irregularities.

“He misses the fundamentals, much less the subtleties, of the independent judiciary,” Wheeler said. “Those concepts are just foreign to him.”

When Trump took office in January 2017, the 11th Circuit had an 8-3 majority of Democratic-appointed judges. Due to the speed of Trump’s nominations and the quick work that the Republican-led Senate under Majority Leader Mitch McConnell made of confirming them, it now has a 7-5 majority of Republican appointees.

The number of Republican and Democratic appointees is typically an indicator of an appeals court’s conservative-liberal balance.

Trump’s nominees have generally been relatively young, meaning they could serve in their lifetime appointments potentially for decades. Trump appointed 8 non-white judges and 11 women to these appeals courts, including Barrett, who he subsequently elevated to the Supreme Court.

Although Supreme Court rulings have the greatest impact on the law, it hears fewer than 100 cases a year, typically leaving the final word to the 13 appeals courts. Trump’s judicial appointees already are having an influence not just on voting rights but on other contentious issues including guns, abortion and LGBT rights.

“Having such a very high number of ideologically driven young courts of appeal judges around the country not only tipped the balance on a number of these circuits but has also tipped it in a way that could last for a long time,” said Russ Feingold, a former Democratic US senator and president of the American Constitution Society, a liberal legal group.

When Trump took office, Democratic-appointed judges held majorities on nine of the 13 appeals courts. Under Trump, the 11th Circuit and two other regional appeals courts – the New York-based 2nd Circuit and the Philadelphia-based 3rd Circuit – have “flipped” to have a majority of Republican appointees.

Even on courts that have not flipped, Republican-appointed judges have made inroads. At the start of Trump’s presidency, the liberal San Francisco-based 9th Circuit had an 18-4 majority of Democratic appointees. Now it is just 16-13.

Trump-appointed judges have made their mark on the 9th Circuit, including when Judge Kenneth Lee authored a ruling last August striking down a California gun regulation that banned large-capacity magazines.

On abortion, four Trump-appointed judges were in the majority in 2019 when the New Orleans-based 5th Circuit declined to reconsider a ruling that upheld a Republican-backed Louisiana law that placed restrictions on doctors who perform abortions. The Supreme Court in a 5-4 ruling last June struck down the law.

The White House did not respond to a request for comment, but supporters of Trump’s judges said their rulings have shown independence from political influence.

“So many of these court of appeals judges … have proven over and over that they put the rule of law and the Constitution ahead of any political agenda. Democrats predicted that they would be political hacks, but they’ve been proven wrong,” said Leonard Leo, a long-time conservative legal activist who advised the Trump administration on judges.

McConnell played a crucial role in clearing the way for Trump’s appointments by impeding Senate confirmation of Obama’s picks – including refusing to consider Merrick Garland’s nomination to the Supreme Court in 2016 – while subsequently speeding approval of Trump’s nominees.

In some ways, Wheeler said, “it’s McConnell’s legacy: He gave Trump the vacancies to fill.” – Rappler.com