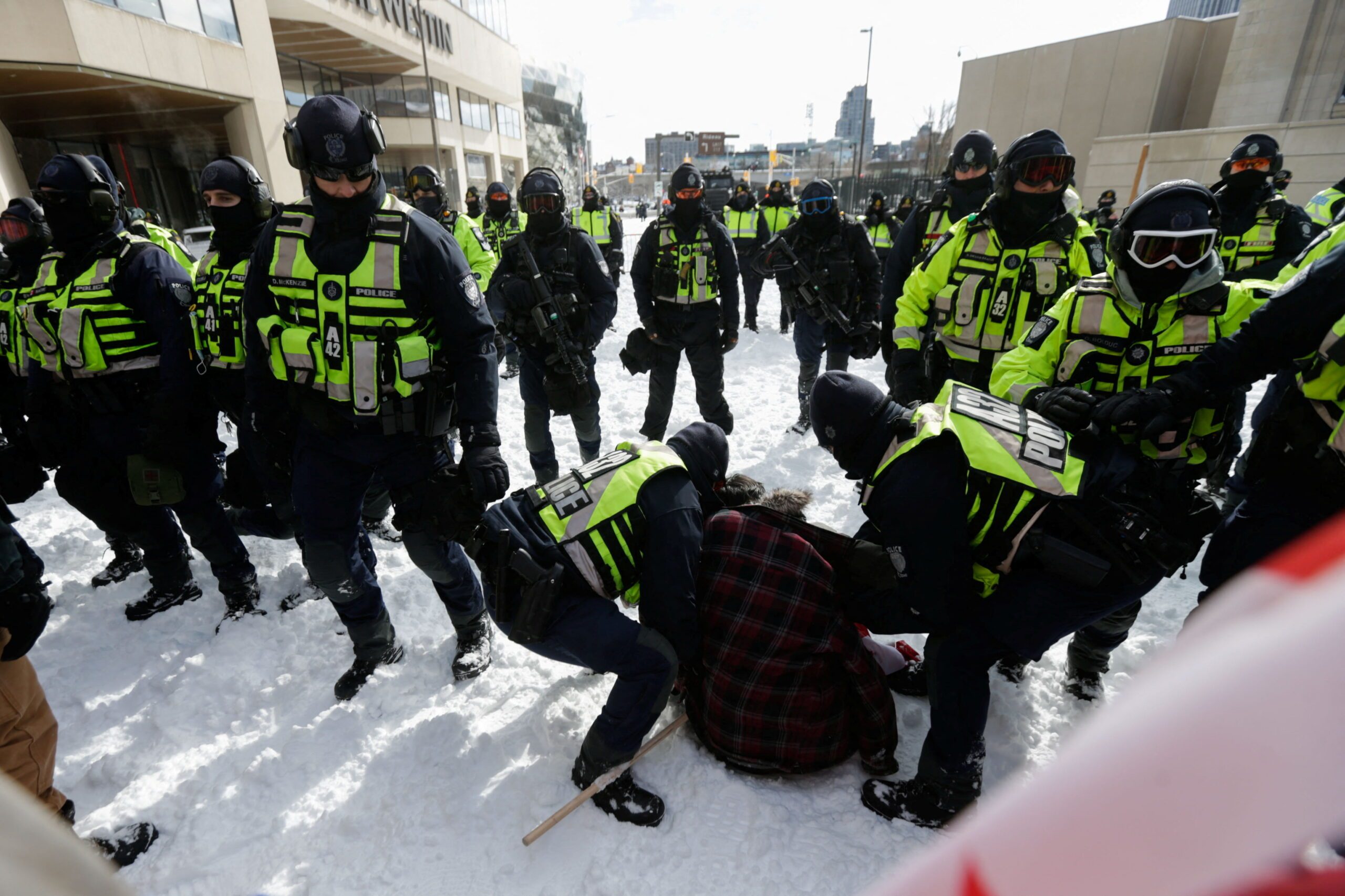 OTTAWA, Canada – Police, some on horseback, pushed into crowds of demonstrators to clear them from the streets of downtown Ottawa on Friday, arresting more than 100 and hauling away vehicles that had been blocking the capital’s core for over three weeks in a protest against pandemic restrictions.

Fearing escalation or violence, Ottawa police had sought to disperse protesters with fines and threats of arrest, but on Friday hundreds of officers moved in despite frigid temperatures and freshly fallen snow, slowly clearing one part of the city.

There were tense moments during the day as some protesters were dragged from their vehicles, and others who resisted the police advance were thrown to the ground and had their hands zip-tied behind their backs.

The protesters showed “assaultive behavior,” forcing mounted police to move in “to create critical space” in the late afternoon, according to a police statement. As this happened, one person threw a bicycle at a horse and was arrested for harming a police service animal, police said.

Authorities said it may take days to fully remove the protesters and tractor-trailer trucks that have occupied Ottawa streets since January 28.

“We will run this operation 24 hours a day until the residents and community have their entire city back,” Steve Bell, Ottawa’s interim police chief, told reporters.

At least one military-style armored vehicle was seen downtown, and there were at least eight helmeted officers on horseback. Some police carried guns, and others what looked like tear gas launchers.

No tear gas was used on Friday. But according to Canadian broadcaster CTV, some demonstrators reported being pepper-sprayed and others trampled by mounted police during the day. Reuters was unable to independently verify those reports.

The occupation began as a convoy of truckers demanding an end to a COVID-19 vaccine mandate for all cross-border truckers re-entering Canada from the United States. But the blockade gradually turned into a broader-based protest against the government of Prime Minister Justin Trudeau. Ottawa police initiated their crackdown by setting up 100 roadblock checkpoints around the protest zone to cut off any further flow of food, fuel, or demonstrators into the area.

By late Friday, police said they had arrested more than 100 people and towed away 21 vehicles. CTV reported numerous truckers were seen driving out of the area of their own accord on Friday, but dozens of trucks still remained by late in the day.

In addition to protesters taken into custody, police said they had arrested the three most prominent organizers, two on Thursday and one on Friday.

Commenting on the arrest of its leaders, Freedom Convoy 2022, an umbrella group representing the protesters, said: “We will continue to hold the line. We refuse to bow to abuses of power. The world is watching, Canada.”

After a night of heavy snow, protesters with shovels on Friday erected a chest-high snowbank on Wellington Street outside parliament and positioned themselves behind it as they waved Canadian flags and “Freedom Convoy” posters.

Police were driving the protesters toward the parliament building, clearing territory along the way, but had yet to reopen the area in front of the House of Commons and below the prime minister’s office by late in the day.

Police were expected to press on through the night, a government source said.

“If they want to arrest me, I’ll put my hands out, and they can twist-tie me up like everybody else here. We’re going peaceful,” said Mark, a protester from Nova Scotia who would not give his last name.

The demonstration has for weeks been non-violent, but on Friday shouting protesters engaged in shoving matches with police, and brief scuffles erupted. Video shared by Canadian media showed a young girl at the center of a tightly packed group of protesters facing off with dozens of officers.

“Protesters have put children between police operations and the unlawful protest site,” Ottawa Police said on Twitter. “The children will be brought to a place of safety.”

One teenage girl who attended the protest with her father and 12-year-old twin siblings said she had come to “show some support” for the truckers.

“Thank all you guys for fighting for mine and my brother and sister’s freedom,” said Emily McAuley, who is from a town 30 hours away from Ottawa by car.

Trudeau on Monday invoked emergency powers to give his government wider authority to stop the protests. Legislators had been due to debate those temporary powers on Friday, but the House of Commons suspended its session, citing police activity.

Trudeau sought the special powers after protesters shut down US border crossings, including Ontario’s Ambassador Bridge to Detroit, a chokepoint for the region’s automakers. The shutdown of the bridge, which was cleared on Sunday, had damaged both countries’ economies and posed a major crisis for Trudeau.

Chrystia Freeland, Canada’s deputy prime minister, told reporters the protesters could not be allowed to undermine the government’s authority.

“These illegal blockades and occupations will end, and they will end for good,” Freeland said. – Rappler.com