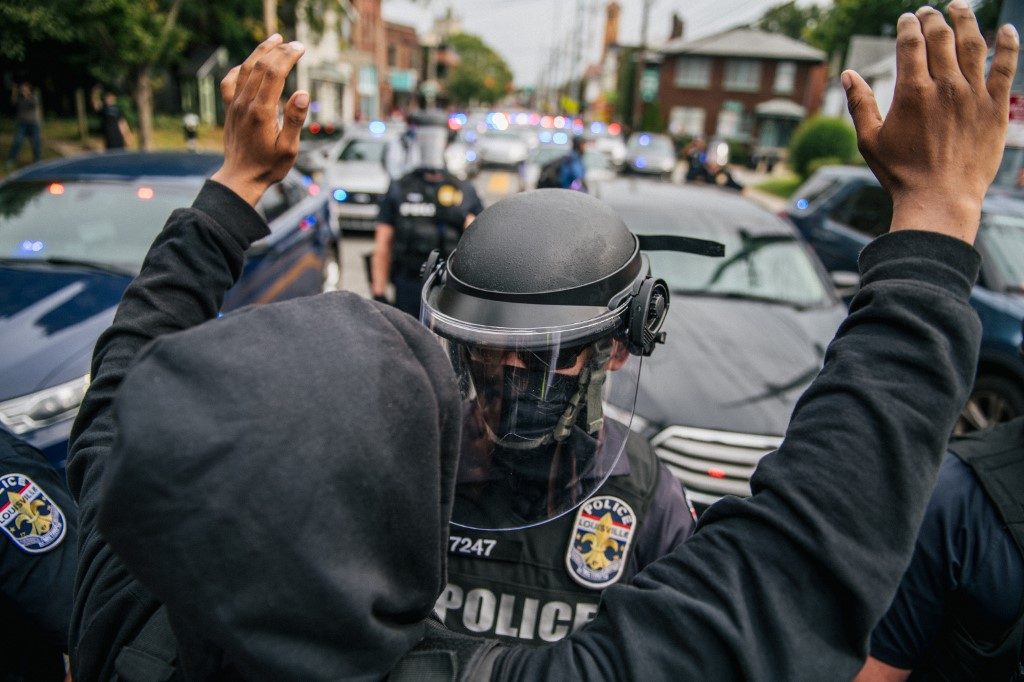 CLASH. In this file photo, a protester raises their hands facing law enforcement during a Louiseville, Kentucky protest on September 23, 2020.

Facebook Twitter Copy URL
Copied
None of the three officers in the raid were charged with Breonna Taylor's death.

The Louisville, Kentucky police department on Tuesday, December 29, fired two officers involved in the case of Breonna Taylor, the African-American woman whose death during a raid became a rallying cry of the Black Lives Matter movement.

“@LMPD (will) terminate employment of officer Joshua Jaynes. He requested the search warrant that led to the tragic murder of #BreonnaTaylor,” tweeted Ben Crump, a lawyer for Taylor’s family.

A lawyer for Detective Myles Cosgrove, another officer involved in the raid, told US media his client had also received termination paperwork.

Taylor, a 26-year-old emergency room aide, was shot six times after police forced their way into her apartment as she slept with her boyfriend on March 13.

Police said the boyfriend, Kenneth Walker, fired once at them, giving them cause to fire back, killing Taylor but not hitting Walker.

None of the three officers in the raid was charged with her death.

Detective Brett Hankison was fired from the police force in June and charged in September with “wanton endangerment,” for wildly and blindly shooting into adjacent apartments during the raid.

He pled not guilty.

The grand jury indictment last week of Hankison — but neither of the others identified as the officers who shot Taylor — sparked anger and protests in the Kentucky city, and accusations by Taylor’s family of a cover-up to protect the police.

‘Cheated of a fair process’

Taylor’s name became a major rallying cry during the Black Lives Matter protests that rocked the US over the summer, as people demanded justice for her and many other Black Americans who died at the hands of police.

But earlier Tuesday, the US Justice Department announced it will not charge the Cleveland police officers who fatally shot Tamir Rice, a 12-year-old Black boy holding a toy gun in 2014.

“It is not enough to show that the officer made a mistake, acted negligently, acted by accident or mistake, or even exercised bad judgment,” the statement closing the investigation said.

“Although Tamir Rice’s death is tragic, the evidence does not meet these substantial evidentiary requirements.”

“The Rice family has been cheated of a fair process yet again,” Subodh Chandra, an attorney for Rice’s family, said in a statement to the US media.

Rice was playing in a park with a pellet gun in November 2014 when Loehmann and Garmback, both of whom are white, drove up in a patrol car, responding to an emergency call.

In surveillance video, Loehmann is seen shooting Rice twice within seconds of his arrival, after the boy appears to reach for the replica firearm in his waistband. The officers were not told that the gun the child was wielding was suspected to be a replica.

A criminal investigation by local prosecutors closed in 2015, without bringing charges against the two officers.

Cleveland city officials moved to discipline the officers in 2017, after a two-year local investigation. Loehmann was fired and Garmback, who drove the police car, was suspended for 10 days.

City officials said they had found no evidence that either officer violated police procedures. Instead, the two were disciplined for other violations that surfaced during the investigation. – Rappler.com