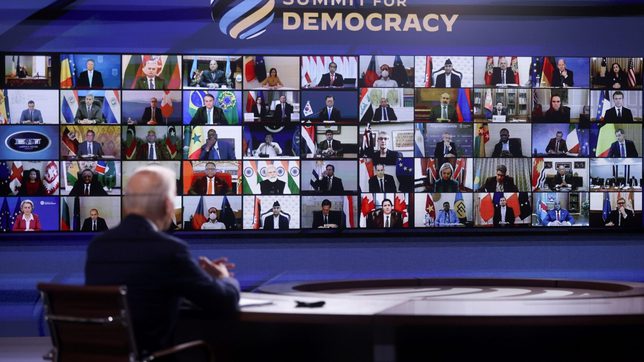 DEMOCRACY SUMMIT. US President Joe Biden convenes a virtual summit with leaders from democratic nations at the State Department's Summit for Democracy, at the White House, in Washington, USA, on December 9, 2021.

Facebook Twitter Copy URL
Copied
Some question whether Biden's democracy summit can force meaningful change, particularly by leaders who are accused by human rights groups of harboring authoritarian tendencies, like the Philippines, Poland, and Brazil

WASHINGTON, USA – US President Joe Biden gathered over 100 world leaders at a summit on Thursday, December 9, and made a plea to bolster democracies around the world, calling safeguarding rights and freedoms in the face of rising authoritarianism the “defining challenge” of the current era.

In the opening speech for his virtual “Summit for Democracy,” a first-of-its-kind gathering intended to counter democratic backsliding worldwide, Biden said global freedoms were under threat from autocrats seeking to expand power, export influence, and justify repression.

“We stand at an inflection point in our history, in my view….Will we allow the backward slide of rights and democracy to continue unchecked? Or will we together have a vision…and courage to once more lead the march of human progress and human freedom forward?” he said.

The conference is a test of Biden’s assertion, announced in his first foreign policy address in February, that he would return the United States to global leadership to face down authoritarian forces, after the country’s global standing took a beating under predecessor Donald Trump.

“Democracy doesn’t happen by accident. And we have to renew it with each generation,” he said. “In my view, this is the defining challenge of our time.”

Biden did not point fingers at China and Russia, authoritarian-led nations Washington has been at odds with over a host of issues, but their leaders were notably absent from the guest list.

The number of established democracies under threat is at a record high, the International Institute for Democracy and Electoral Assistance said in November, noting coups in Myanmar, Afghanistan, and Mali, and in backsliding in Hungary, Brazil, and India, among others.

US officials have promised a year of action will follow the two-day gathering of 111 world leaders, but preparations have been overshadowed by questions over some invitees’ democratic credentials. 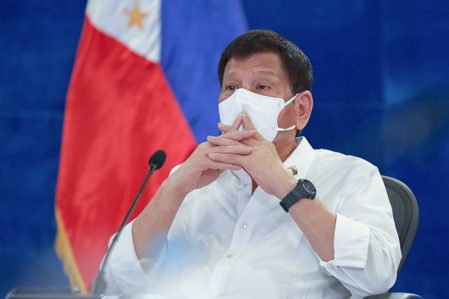 The White House said it was working with Congress to provide $424.4 million toward a new initiative to bolster democracy around the world, including support to independent news media.

US Treasury Secretary Janet Yellen told the summit her department was cracking down on money laundering, illicit finance, and tax evasion. “After all, the United States cannot be a credible voice for free and fair government abroad if at the same time, we allow the wealthy to break our laws with impunity,” Yellen said.

This week’s event coincides with questions about the strength of American democracy. The Democratic president is struggling to pass his agenda through a polarized Congress and after Republican Trump disputed the 2020 election result, leading to an assault on the US Capitol by his supporters on January 6.

Republicans are expanding control over election administration in multiple US states, raising concerns the 2020 midterm elections will be corrupted.

The White House on Thursday issued a statement of support for legislation introduced by Democratic lawmakers that would put new limits on the use of presidential pardons and strengthen measures to prevent foreign election interference, among other measures intended to safeguard US democracy.

The summit also included Taiwan, prompting anger from China, which considers the democratically governed island part of its territory.

A Chinese foreign ministry spokesperson said the invitation of Taiwan showed the United States was only using democracy as “cover and a tool for it to advance its geopolitical objectives, oppress other countries, divide the world, and serve its own interests.”

The White House dismissed the criticism. “In the context of this summit we don’t see this as … being about any one specific country. We are really emphasizing at this summit that we are seeking to build democratic momentum,” a senior administration official told reporters.

Washington has used the run-up to the summit to announce sanctions against officials in Iran, Syria, and Uganda it accuses of oppressing their populations, and against people it accused of being tied to corruption and criminal gangs in Kosovo and Central America.

Further measures against foreign officials for graft in their countries’ COVID-19 responses, as well as other allegedly corrupt schemes, were announced as the summit began on Thursday.

US officials hope to win support during the meetings for global initiatives such as use of technology to enhance privacy or circumvent censorship and for countries to make specific public commitments to improve their democracies before an in-person summit planned for late 2022.

Some question whether the summit can force meaningful change, particularly by leaders who are accused by human rights groups of harboring authoritarian tendencies, like the Philippines, Poland, and Brazil.

Annie Boyajian, director of advocacy at nonprofit Freedom House, said the event had the potential to push struggling democracies to do better and to spur coordination between democratic governments.

“But, a full assessment won’t be possible until we know what commitments there are and how they are implemented in the year ahead,” Boyajian said.

The State Department’s top official for civilian security, democracy, and human rights, Uzra Zeya, said civil society would help hold the countries, including the United States, accountable. Zeya declined to say whether Washington would disinvite leaders who do not fulfill their pledges.

Human Rights Watch’s Washington director Sarah Holewinski said making the invitation to the 2022 summit dependent on delivering on commitments was the only way to get nations to step up. – Rappler.com